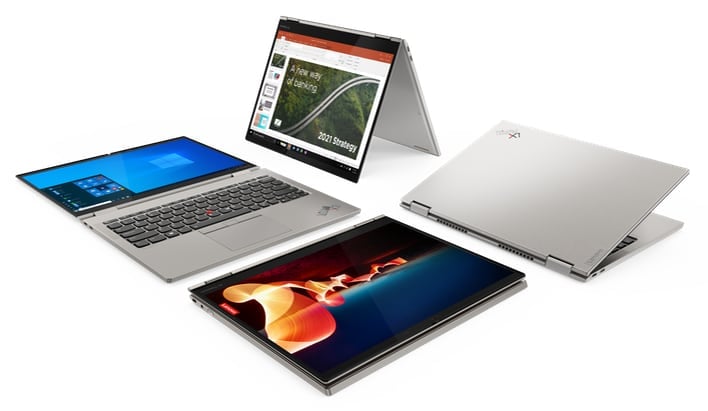 Lenovo's ThinkPad X1 family of ultraportables has always been popular, and the company is looking to widen its appeal even further with the introduction of three new models. The devices feature all-new designs, and are among the thinnest and lightest in their respective classes.

Starting things off is the ThinkPad X1 Titanium Yoga, which is a 2-in-1 convertible with a 13.5-inch 2K (2256x1504) touch display. Given that it’s part of the Yoga family, it has a 360-degree hinge, while the 2K display has a 3:2 aspect ratio and covers 100 percent of the sRGB color space. The display is also Dolby Vision rated, and has a brightness rating of 450 nits.

When it comes to performance, Lenovo allows you to configure the ThinkPad X1 Titanium Yoga with up to an 11th generation Core i7 vPro processor with up to 16GB of LPDDR4x memory; likewise, up to a 1TB SSD can also be configured in the system. Also along for the ride inside the 2.54-pound convertible are dual Thunderbolt 4 ports, optional 4G LTE or 5G connectivity, Dolby Atmos speakers, 4 360-degree microphones, and a 44.5 WHr battery that is good for up to 10.8 hours of runtime.

The ThinkPad X1 Titanium Yoga will be available later this month priced from $1,899.

The machines feature a 57 WHr battery, with the ThinkPad X1 Carbon lasting up to 16 hours per charge, while the ThinkPad X1 Yoga gives up after 15 hours. The former weighs in at 2.45 pounds, while the latter is a bit portlier at 3 pounds due to it being a convertible. Both are the first to support the Dolby Voice standard, and include optional 4G LTE and 5G connectivity.

Finally, we come to the ThinkPad X12 Detachable, which has a 12.3-inch FHD+ display covered in Gorilla Glass. The tablet can be attached to a full-size keyboard turning it into a full-fledged laptop. Powering the machine is up to a Core i7 vPro Tiger Lake processor, up to 16GB of LPDDR4x memory, and up to a 1TB SSD.

According to Lenovo, the ThinkPad X12 Detachable will be available this month priced from $1,149.