Lenovo GeForce RTX 3060 With GDDR6X Surfaces, Could There Be A Refresh?

When NVIDIA announced the Ada Lovelace-based GeForce RTX 4000 family, it was very clear about the fact that GeForce RTX 3000 cards based on its Ampere architecture aren't going anywhere anytime soon. Those cards are over two years old now, and while their performance still holds up, they could face stiff competition from AMD Radeon and eventually Intel Arc GPUs as well. Perhaps as insurance against that, NVIDIA could be readying a slightly-updated model of the more budget-minded GeForce RTX 3060.


There have been rumors going around about an Ampere refresh for a long time now. The RTX 3070 Ti and RTX 3080 Ti launched some nine months after the original RTX 3000 models, and could be considered a "refresh" of sorts. However, the original rumors were for a full-series refresh that has never materialized. 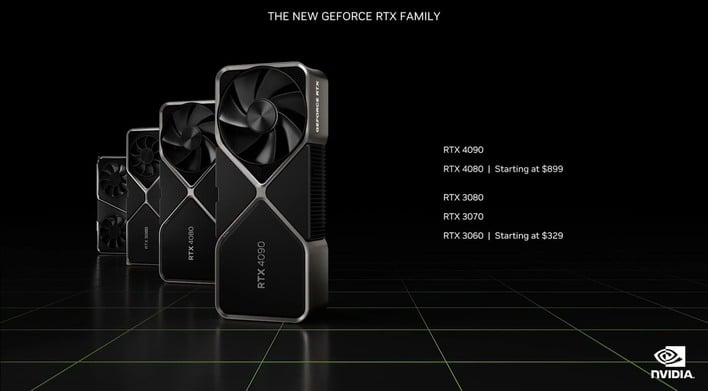 Even after the launch of the RTX 4080, NVIDIA still isn't going to have anything from the new architecture to serve the overwhelming majority of the market, which is to say the space that exists under $900. The RTX 3060 is the most popular chip in the Ampere family, and it's directly in the sights of Intel with its Arc Alchemist GPUs.
In that context, a small upgrade makes sense, although we're not sure if that's what's actually happening. The beginning of this story starts when regular leaker 188号 (@momomo_us on Twitter) spotted a listing in a Slovakian Lenovo spare parts retailer for a GeForce RTX 3060 with 12GB of GDDR6X memory. GDDR6X bottoms out at 19 Gbps, so that would be a 4-Gbps upgrade, raising memory bandwidth from 360 GB/sec to 456 GB/sec.
The listing at Lenovoshop.sk has since been removed, but that same card is also for sale at many other outlets, including Newegg, Provantage, Compsource, and others. At almost every single one of these shops, the card is listed as a GeForce RTX 3060 with 12GB of GDDR6X memory. However, almost every single storefront lists the card with one image, and it's exactly the same image: the one at the top of this article. That points to them using the same source for their information.
There's one site that lists the card—same model number—without that picture, and it's Insight. Notably, Insight also lists the card as a standard GeForce RTX 3060 model with 12GB of GDDR6 memory. Disappointing as it may be, we suspect that the "X" in the other listings is probably just a typo on Lenovo's part. Further working against the idea of an upgraded 3060 model is the fact that this isn't a new card. References around the web to the Lenovo part number go back at least to the beginning of this year.
There was another rumor going around yesterday about a similarly-upgraded GeForce RTX 3060 Ti. Videocardz noted that if you go through a complicated process, you can access a special page on UK retailer Scan that offers to sell you an "NVIDIA GeForce RTX 3060 Ti Founders Edition 8GB GDDR6X". That site theorized that it would be a terrible coincidence if Scan were offering this in the face of earlier rumors.

Well, accessing the site now and adding the card to your cart shows that it seems to have simply been another typo, and the RTX 3060 Ti that Scan is offering is just a regular old Founders Edition card. The £380 final price after tax and shipping ($420 USD) isn't all that bad for an RTX 3060 Ti, though.