We're blending together a couple of leaks today, both because they inform each other, and because that's just how we roll. A curious result found in the Einstein@Home database seems to be for an unreleased Threadripper CPU. A separate AMD roadmap leak from a conference in Indonesia doesn't have a lot of new information, but may give us some insight on when that CPU will actually be available.

First up, the database leak. Einstein@Home is a distributed computing project that searches for neutron stars. Like most distributed computing projects, it's open for anyone to contribute their CPU cycles to the massive computational workload, but Einstein@Home maintains a database of contributors that includes the specifications of their hardware. We've seen leaks from BOINC databases before. 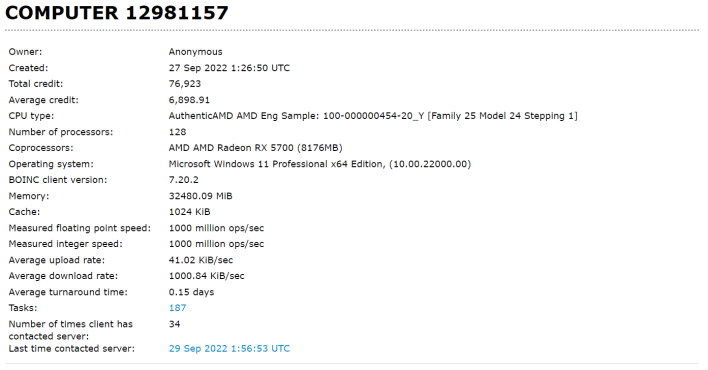 
What we haven't seen in the database until now is a 64-core Ryzen CPU using AMD's Zen 4 architecture. The entry for the machine in question is screenshotted above, and you can clearly see that it's an AMD Engineering Sample Model 24 from Family 25—that means it's almost assuredly a Zen 4 part. Even if that information wasn't available, the Einstein@Home listing includes the CPU's L2 cache. Having a solid megabyte of L2 pins this AMD CPU squarely as a Zen 4 part.

The presence of 128 threads (64 cores with SMT) indicates this has to be either an EPYC or Threadripper CPU. We suspect it's one of the upcoming Threadripper "Storm Peak" chips, based on both the model number and the relatively-modest 32GB of memory installed. EPYC Genoa and Storm Peak should top out at 96 cores, but this could be a model lower in the stack or it simply has a reduced number of active cores due to being an early sample. 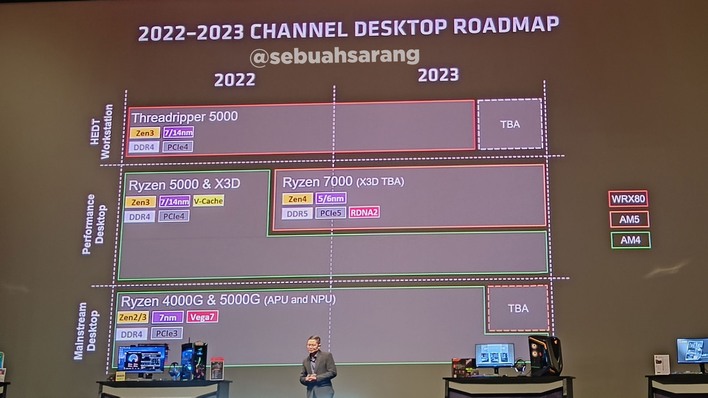 
As for the question of when the next-generation Threadripper parts will be available, well, this leaked roadmap from Indonesia might give us a clue. The photo is from the AMD Indonesia Grand Launch Party for the Ryzen 7000 series, which took place on September 28th. In that sense, it's not really a "leak" per se, but to our knowledge, it hasn't been shown anywhere else.

The roadmap is for AMD's desktop products, and it seems to indicate that we'll have to wait until the latter part of next year before we see next-generation Threadrippers. It also confirms the existence of "APU" products coming to Socket AM5. Neither of these reveals are particularly surprising, but it's good to have official word.