One of the sticking points hampering adoption of Intel's Arc GPUs has been its performance in older titles, particularly those using much older versions of the DirectX API. You could argue that it doesn't matter whether the card gets 150 or 300 FPS in CS:GO, but some people take that kind of distinction very seriously. Fortunately for those folks, Intel's been hard at work on its DirectX 9 driver, and has some very big gains to show for it.

We talked about some of this in the context of the driver update yesterday, but Intel has a video out with everybody's favorite hype men, Tom "TAP" Petersen and Ryan Shrout. They go into some detail on the changes to the driver that enabled these improvements, as well as the reasoning behind them. While Intel's GPU drivers originally relied entirely on a translation layer for DirectX 9 games, that is no longer the case. 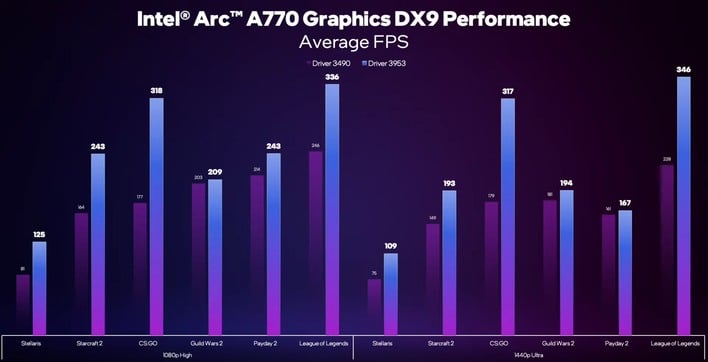 Indeed, Tom specifically states that Intel has created a native DirectX 9 implementation at great cost in terms of man-hours and effort. He goes on to explain that it won't be used for every game, and that the company will continue to use translation for older APIs where it makes sense. However, some popular games will receive specific attention in Intel's driver with a native API implementation that drastically improves performance, particularly in the case of 99th-percentile frame times, or the worst-case performance. 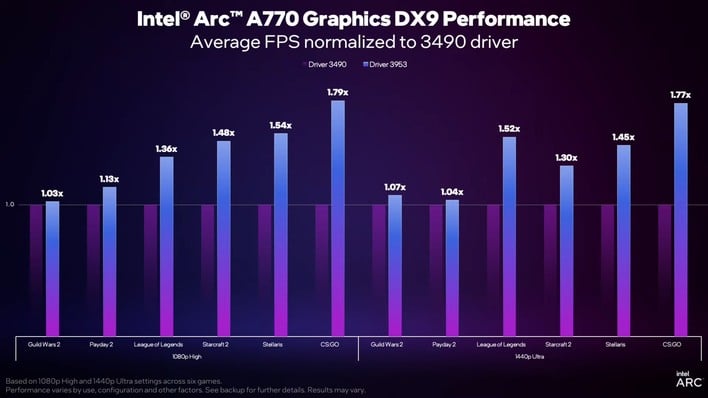 Does that mean that only whitelisted games will be using Intel's new DirectX 9 driver implementation? Well, probably. At least the games that Intel targeted are some of the biggest around. We already mentioned CS:GO—that's the title with the biggest gains from Intel's work. The company claims that CS:GO's average FPS goes from 177 to a whopping 318 on Arc A770 in 1080p "High." That's not the only game with big gains, though; the latest driver also boosts Guild Wars 2, Payday 2, League of Legends, Starcraft 2, and Stellaris as well. 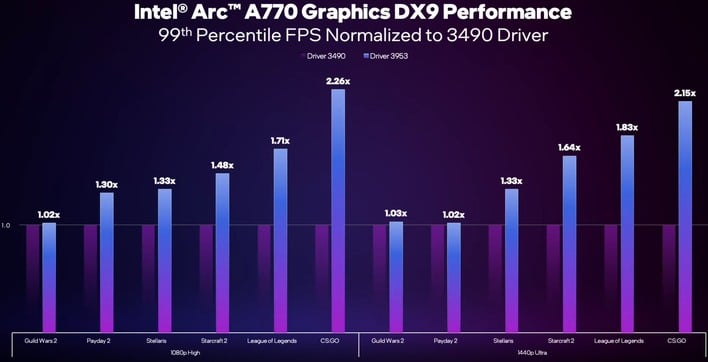 Notably, Intel didn't just improve average FPS. The biggest problem with the D3D9on12 shim is that it's very heavy on the CPU, which almost always means inconsistent performance. Stuttering, even micro-stutter, is a more serious issue than a simple low frame rate, but fortunately, Intel understands this. TAP and Ryan go on to explain that 99th-percentile frame rates were a specific matter of concern for Intel's engineers, and are happy to report that it is improved even more than the average FPS. 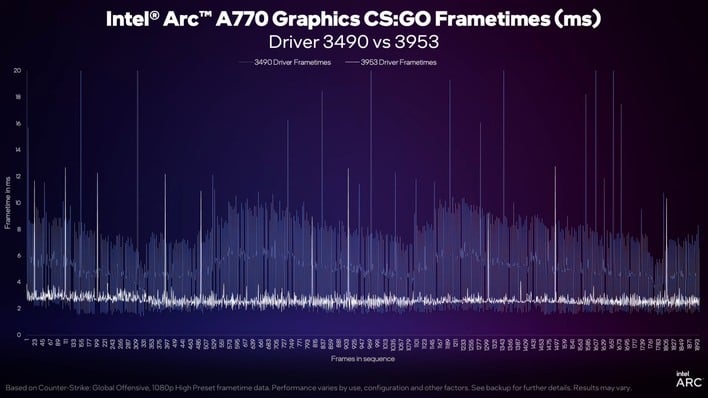 It's completely understandable that Intel isn't going to take the time to optimize every DirectX 9 game. However, it seems to us that a general implementation could work fine for plenty of other games. We'd like to see a manual toggle in the drivers to enable native DX9 support for other titles that aren't on the list. Even if that option doesn't materialize, though, this is great progress for Intel's driver team, and deserves to be applauded.