Earlier this week, Intel announced its highly anticipated family of discrete graphics cards targeted at the enthusiast gaming market. The cards are based on Intel's Xe-HPG architecture, and will be marketed under the Arc brand name.

The first-generation Arc graphics cards were developed under the GPU codename Alchemist, while the second, third, and fourth-generation Arc GPUs will carry the codenames Battlemage, Celestial, and Druid, respectively. At first glance, we didn't think much about these codenames, but upon reflection, there's more to them than meets the eye. One thing that all of these codenames have in common is that they refer to fictional game characters who have a specialized set of magical powers.

We did a little image enhancement mojo of our own on the minimal set of visual Intel has let slip into the wild for Arc, so let's get a close look and meet Intel's forthcoming GPU warriors...

For example, Alchemists were people who attempted to convert metals from one form to another (i.e., transforming lead or copper into something much more valuable, like gold). Alchemy also involved attempts to cure physical ailments and reverse the aging process in humans (to no avail). Alchemists also happen to be a part of Dungeons and Dragons lore.

As for Battlemage, this refers to a class in The Elder Scrolls game universe. This seemingly ties into Alchemists, as members of the Battlemage class are also skilled in producing magic spells as an offensive attack on opponents. Coupled with their brute strength and adept handling of both blunt and blade weapons, they are a force to be reckoned with on the battlefield.

Celestial is a name that has been around in the comics realm since the late 1970s and is a critical tie-in with the upcoming Marvel movie, Eternals. Celestials are an alien race in Marvel fandom that have almost immeasurable amounts of cosmic and supernatural power. They can create life, i.e., the Eternals, and are capable of great destruction. Star Lord's mighty father, Ego, as we learned in the movie Guardians of the Galaxy: Volume II is a Celestial, for example. And if you're into Dungeons and Dragons, Celestials are native to the Upper Planes.

Dare To Defy The Druid

Finally, we come to Druid, a character class found in games like Baldur's Gate, Dungeons and Dragons, EverQuest II, and World of Warcraft. These classes tend to have magical abilities, including casting spells and shapeshifting and even controlling the weather elements in some instances.

Intel is seemingly using these fictional characters for codenames as a way for gamers to relate to their products and get behind them. After all, the company is obviously looking to court gamers away from the AMD-NVIDIA duopoly when it comes to discrete gaming graphics cards and every little bit counts. Remember AMD Ruby and NVIDIA's Dawn? These characters were often used in graphics tech demos and were very well-received by gamers in general. We think this is a stroke of crisp marketing by Intel and a good way to relate to gamers early on, giving them heroes to root for. And frankly, the artwork also just plain looks cool. 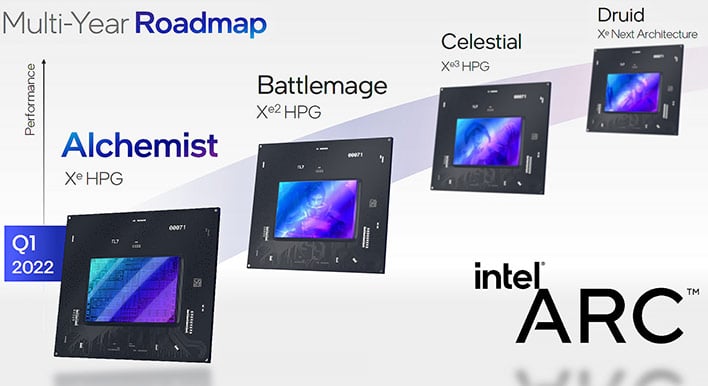 As we previously reported, Intel has the feature-set to compete with both the red and green team with Arc, but it may be a few months before we see how well the product stacks up regarding performance and visuals with XeSS, versus the current generation Radeon RX 6000 and GeForce RTX 30 cards. Stay tuned for more as we track Intel Arc on its forthcoming introduction in the market.