Today is not just any ordinary Tuesday. Nope, no siree, it sure is not. It is very different from almost every other Tuesday in the past several years, and do you know why? Simple—we have not one, but two upcoming Intel CPU cameos that have appeared on the web! I know, I know, today is special for another reason—it's Taco Tuesday!
But enough with tacos (I vote pizza is better anyway, don't @ me). We're focused on silicon, and Intel has some important CPU launches coming up in 2021. The first of those is Rocket Lake, which figures to be the last of Intel's now-ancient 14nm node. While the competition is already on 7nm and heading to 5nm in 2021, Intel has been squeezing everything it can out of 14nm, and will again for one more round.
To be fair, it is a pretty advanced 14nm node, so the gap is not quite as big as a simple number comparison would indicate. But that's a separate discussion. What is interesting here is apparent evidence that Rocket Lake-S is on track to launch in the first quarter of next year, as Intel announced earlier this month.
The photo at the top of this article comes courtesy of Bilibili forum member Yuuki_AnS. There is not much in the way of accompanying information, only that the photo purports to show an 11th generation Core processor based on Rocket Lake-S.
Rocket Lake is interesting for a few reasons. It will be the first desktop processor from Intel to support PCI Express 4.0, and will also usher in support for Thunderbolt 4. And though it is another 14nm release, it is based on Intel's new Cypress Cove architecture, representing the company's first major microarchitecture shift on the desktop since Skylake (2015).
Intel will offer Rocket Lake-S CPUs in up to 8 cores and 16 threads, whereas Comet Lake goes up to 10 cores and 20 threads. It will feature Xe graphics, and according to Intel, will be "another fantastic processor for gaming." Intel needs it to be (the company claims it will deliver a double-digit IPC uplift), with AMD looking ready to take the gaming performance crown with its Ryzen 5000 series.
Looking further down the road, Alder Lake looms, and there is a photo of that as well... 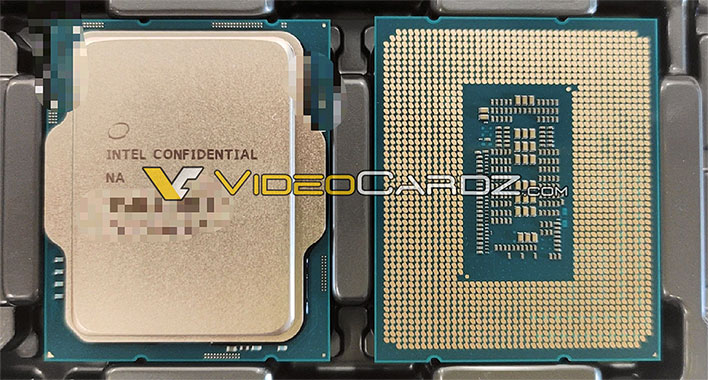 In case the giant watermark does not make it obvious, the above photo comes from the folks at Videocardz, with not much accompanying information on this one either. However, we do get a view of both the integrated heatspreader (IHS) on top and a bottom view of the rectangular shaped CPU.
Alder Lake is not a secret. Intel talked about it during its Architecture Day 2020 event. From what Intel has shared, Alder Lake will employ multiple enhancements to its hybrid and 3D stacked chiplet technologies, combining its forthcoming performance-oriented Golden Cove and energy efficient Gracemont architectures into a single package.
While Comet Lake-S uses the LGA-1200 socket, Alder Lake-S will make use of a new LGA 1700 socket, hence the rectangular package. It figures to be an intriguing launch—hybrid designs combining performance and power efficient cores make sense in mobile designs, but will they benefit the desktop in any meaningful way? We'll eventually find out.
Regardless of these end up performing, if the pictures are real, it is a good sign for Intel, suggesting that everything is on schedule.