Surprising as it may seem, Intel is the first company to release a stable (read: not beta) graphics driver tuned for Windows 11, beating both AMD and NVIDIA to the punch. This kind of aggressive push bodes well for Intel's efforts to infiltrate the modern discrete GPU market, and as far as gamers are concerned, specifically its Xe-HPG part.
Just to be clear, the driver Intel just released is not for its upcoming lineup of discrete graphics cards, like the DG2 card for gaming. instead, the WDDM 3.0-compliant driver is for various integrated graphics solutions, dating back to ones found on its 6th Gen Core and related Pentium Silver and Celeron processors. That also includes its newest integrated solutions based on its Xe architecture, like its Iris Xe Max solution.

Who cares about integrated graphics, right? Not hardcore gamers, that is for sure. But that also misses the point. Intel's pending foray into discrete graphics hinges not only on being able to execute on the hardware level (and rumor has it the company is in good shape, with its initial offering said to offer performance similar to a GeForce RTX 3070 Ti), but also on the software/driver side.
Over the past couple of years, Intel has stepped up its efforts in the GPU driver space with timely releases. It is creating good habits for itself, and that continues with embracing Windows 11 before a finalized version of the operating system even ships—Windows 11 is currently being tested in the Windows Insider program and will roll out later this year, perhaps in October. 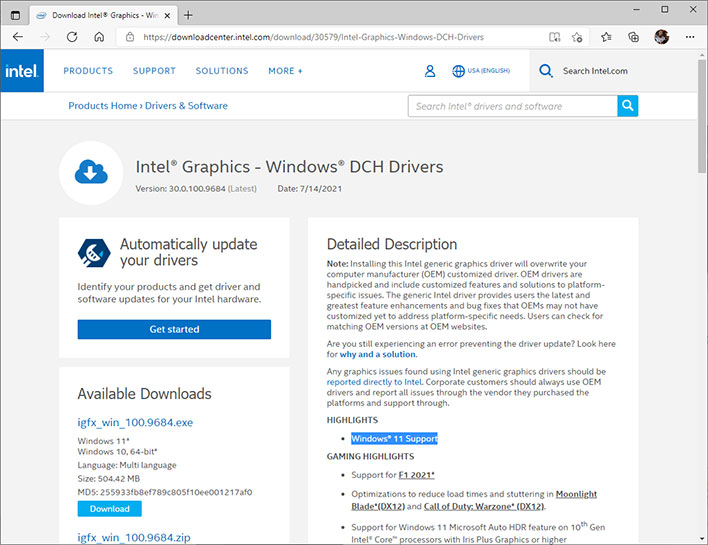 The driver version Intel has released is 30.0.100.9684. Here are the developer highlights...
There are some goodies for gamers as well, just as one would hope with a driver update. Specifically, it brings with it optimizations for F1 2021. Intel also said the driver is tuned to reduce load times and stuttering in Moonlight Blade (DX12) and Call of Duty: Warzone (DX12).
In addition, the 30.0.100.9684 graphics driver adds support for Windows 11's Auto HDR feature on 10th Gen Intel Core processor with Iris Plus graphics or higher. Auto HDR is one of the keys to Microsoft's claim that Windows 100 will deliver "the best PC gaming experiences yet."
Auto HDR itself is not new—it was formerly an Xbox exclusive feature—just new to Windows 11. The feature "automatically updates your game's lighting and color to high dynamic range," and according to Microsoft, the response from creators and players so far has been "incredible."
There are several bug fixes in this driver release too. They include...
There are also a bunch of bugs that still need stomping out, but overall, this is a fairly fleshed out driver release with support for Windows 11. Hopefully this effort continues when Intel starts cranking out discrete GPUs later this year.