All eyes are on Intel as it gets closer to launching its first discrete graphics card for gaming. And the big question is, how will it perform relative to the competition? Obviously we will not know for sure until an actual product launch occurs. Leaks and rumors abound in the meantime, and the latest one suggests Intel will be in rather good shape.
Intel's discrete graphics products will target several different segments, including entry-level applications, gaming, and high end computing (HPC). The Xe-HPG is aimed at gamers, with Intel getting ready to launch its DG2 lineup with up to 512 execution units (EUs). Past rumors claim the top-end model will deliver performance somewhere in between a GeForce RTX 3070 and GeForce RTX 3080 (so on the level of a GeForce RTX 3070 Ti, basically).
That would be quite the achievement, but is it realistic to think Intel will hit that kind of performance metric right out of the gate? We will have to wait and see, but along those lines, a fresh leak seemingly suggests Intel is on track to do exactly that. Have a look... 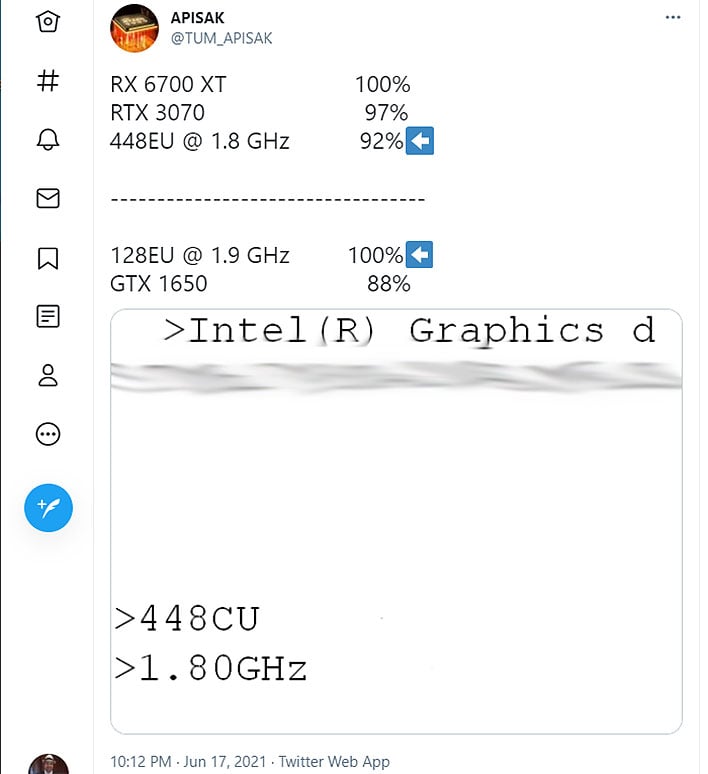 Prominent leaker @TUM_APISAK posted some performance comparisons between an Intel DG2 graphics card and both AMD's Radeon RX 6700 XT and NVIDIA's GeForce RTX 3070. Part of what is interesting here is the reference to 448 EUs. Up to this point, we have not seen any leaks pointing to such a configuration.
Intel's internal documentation have pointed to there being 512 EU, 384 EU, and 128 EU variants. According to this latest leak, however, there will also be a version with 448 EUs. This particular engineering sample (assuming this is a legit leak) is clocked at 1.8GHz.
It's not clear what benchmark was run, only that the DG2 part came with 5 percent of the GeForce RTX 3070, and 8 percent of the Radeon RX 6700 XT. This suggests to us that it is likely a 3DMark benchmark run, which in our testing is where the Radeon RX 6700 XT is sometimes able to squeak out a victory against the GeForce RTX 3070. But you know, being a leak, this is could also be bogus.
Assuming it's not bogus, this also serves as further proof that the 512 EU model will indeed be comparable in performance to the GeForce RTX 3070 Ti. That is good company to be in. Now let's hope Intel comes out with sensible pricing and enough stock to meet the demand.

The leak also points to a 128 EU model clocked at 1.9GHz outperforming the GeForce GTX 1650 by 12 percent, in this particular benchmark. Good stuff if true. We shall see.