Intel has some intriguing product launches in the pipeline. One of them is Alder Lake, which represents a spirited shift to a hybrid CPU architecture, and the other is DG2, its first discrete graphics solution of the modern era for gaming. Incidentally, both have just made a cameo on Geekbench, the popular benchmarking utility.
Let's talk about the CPU first. According to how it was recognized by Geekbench, the unspecified Alder Lake chip (labeled simply as "Intel 0000") is listed as a 14-core processor with 20 threads. Get used to seeing these kind of weird (by today's standards) core and thread arrangements, because they will be the norm with Alder Lake.
How does Intel arrive at 14 cores and 20 threads? Alder Lake is a heterogeneous architecture that mixes high performance cores based on Golden Cove with power efficient cores based on Gracemont. So with this particular SKU, we are looking at a 6+8 configuration. That is to say, 6 Golden Cove cores with Hyper Thread support (so 12 threads) and 8 Gracemont cores without Hyper Threading (so 8 cores). Hence, 14 physical cores (6+8) between the two, and 20 threads (12+8). 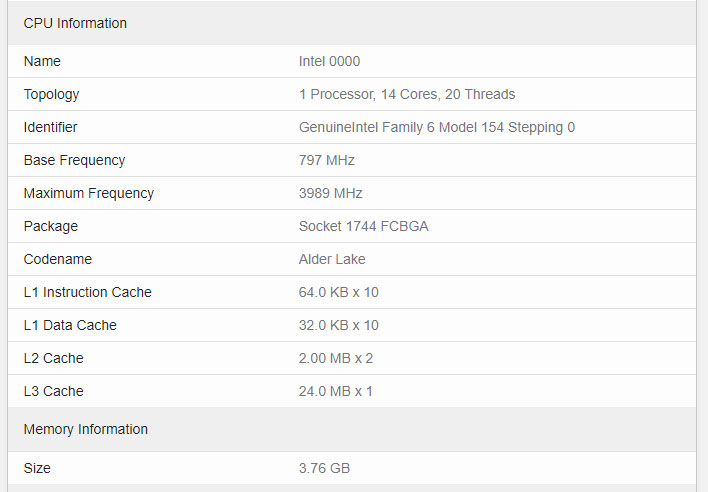 According to the benchmark leak, this 14-core/20-thread Alder Lake processor sports an 800MHz base clock and 4GHz turbo frequency, or thereabouts (Geekbench recognizes the base and turbo clocks at precisely 797MHz and 3,989MHz). It also shows the chip has wielding 24MB of L3 cache.
It remains to be seen what the actual clock speeds and overall specifications will be like when Alder Lake actually ships. To that end, we have seen similar leaks in the past, including one for an Alder Lake CPU with the same 14-core/20-thread arrangement, but with base and turbo clocks listed as 800MHz and 4.69GHz, respectively.
There is more here to digest, though, and namely the presence what we presume is an DG2 graphics solution based on Intel's Xe-HPG GPU. Have a look... 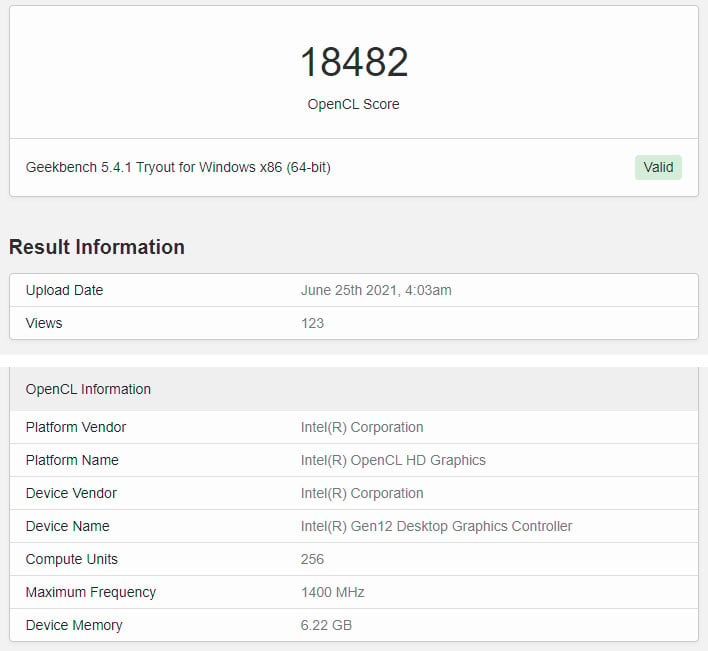 Bear in mind that Geekbench does not specifically denote the graphics accelerator as a DG2 part, but it does identify as a "Gen12 Desktop Graphics Controller." That is almost definitely DG2.
Intel is expected to launch different variants of its DG2 card, with up to 512 execution units. The one featured in this benchmark leak features 256 EUs (2,048 cores) and 6GB of memory. It is listed as running at 1.4GHz.
Though it is labeled as a "Desktop Graphics Controller," the benchmark listing also identifies the platform as being based on an FCBGA 1744 socket, which suggests this is actually a notebook system (Alder Lake on the desktop will leverage a new LGA 1700 socket).
As to the performance, the DG2 part scored 18,482 in the OpenCL test. That puts in the ballpark of a GeForce GTX 1050 or Radeon RX 560X. Not exactly stellar, but bear in mind that (A) this is not the top DG2 part, and (B) it's still early in the game, with driver optimizations and specification tweaks having the potential to substantially improve performance.
We'll find out soon enough. Intel intends to launch both Alder Lake and DG2 before the end of the year, possibly in October around the same time as Windows 11 will be out.