Windows 11 has finally been announced, and it seems that many of the leaks and rumors were true. However, there is much more to cover that we had not heard about yet, so let’s take a look at what Microsoft showed off today during its Windows 11 livestream…

As we mentioned, it turns out that many of the leaks about the Windows 11 interface were true, but what Microsoft did with Windows 11 is still fascinating. Panos Panay, Chief Product Officer for Windows and Devices, explained that the OS has been “redesigned for productivity, creativity and ease.” One of the most notable of these changes is the repositioning and reworking of the iconic Start menu. 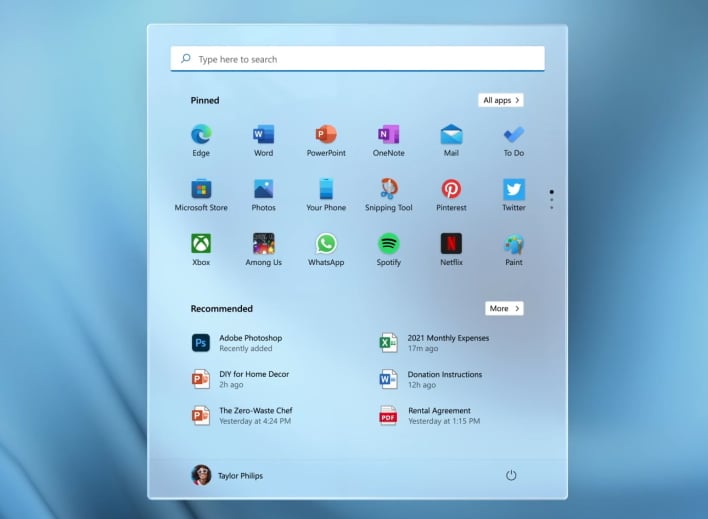 While the new Start menu still has much of the same functionality as past versions, it also “utilizes the power of the cloud and Microsoft 365 to show you your recent files no matter what platform or device you were viewing them on earlier, even if it was on an Android or iOS device.” Sitting directly beside the new Start menu is the search feature, which will hopefully be much more useful than on Windows 10. Rather than searching the web randomly, users will hopefully more easily find buried or lost files on their system. 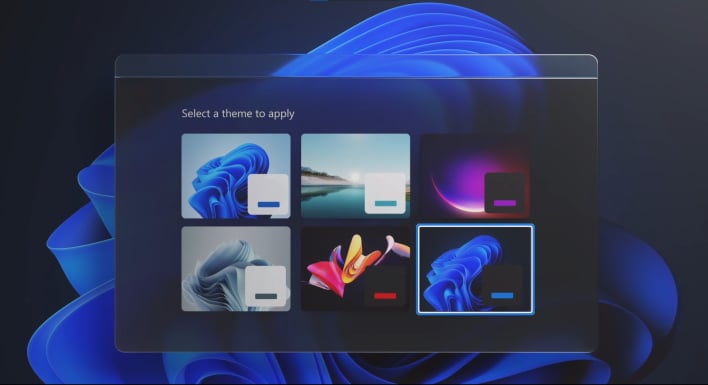 Besides these feature changes, users will also notice a smoother and more contemporary design around Windows 11 which looks quite like something from macOS. In the launch livestream, Panay elaborated that the design team examined every pixel and detail, such as how the light reflects across icons, transparencies, colors, textures, transitions, and much more. The hope with these changes is that all content stands out from the background to make Windows 11 the best productivity and creativity OS while allowing users to feel an “incredible sense of calm.”


Productivity and Multitasking On Windows 11 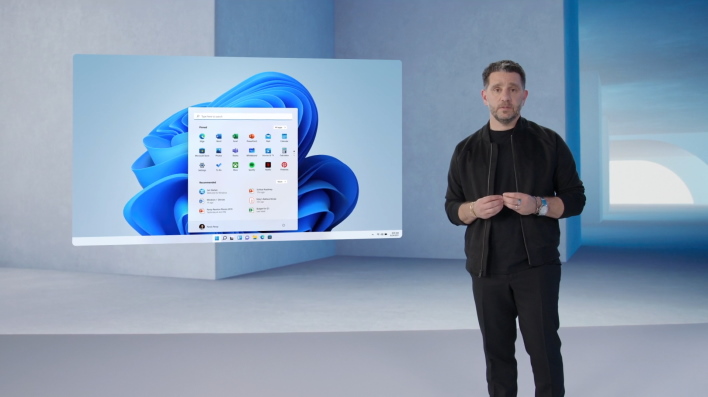 Of everything learned at the Windows 11 launch event, the productivity features introduced may be some of the best yet. Panay explained that Windows Wake, Hello, and Browsing would be significantly faster on Windows 11. Also, updates will be 40% smaller and more efficient, as is the operating system itself, which will consume less energy leading to better battery life. 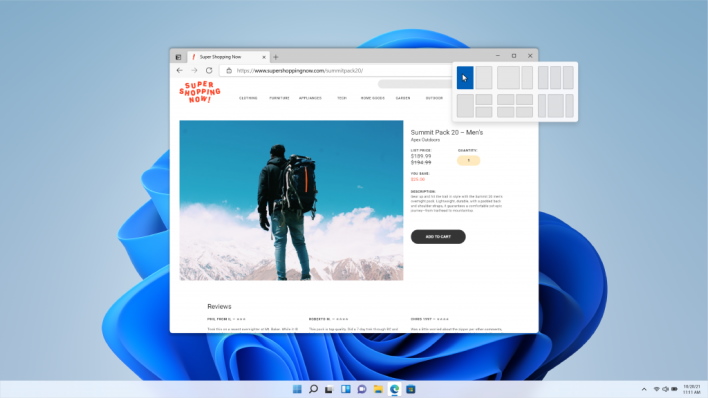 Then, Carmen Zlateff, Partner Director of Windows User Experience, introduced us to Snap Layouts and Snap Groups. The new layout feature can allow users to easily and effectively use multiple apps simultaneously with whatever size display they may have. Then, these layouts can be saved into Snap Groups, which can let people restore their layout should they have to click to another app or leave the PC for a while. Furthermore, this feature also allows layouts on other monitors to be saved, so if you must un-dock a laptop at work, you can pick right back up where you left off when you return.

Another nice feature in a similar vein is the new Windows Widgets, introduced by Product Marketing Lead Phillip McClure. As McClure suggested, many people use their phones for notifications and quick information as it is typically invasive to do so on the desktop. However, Windows Widgets changes that all, as users can swipe or click a button to see an overlay on their desktop, giving them all the quick info they need. Moreover, Windows Widgets can be rearranged, resized, and adjusted as one needs to be the best it can be. 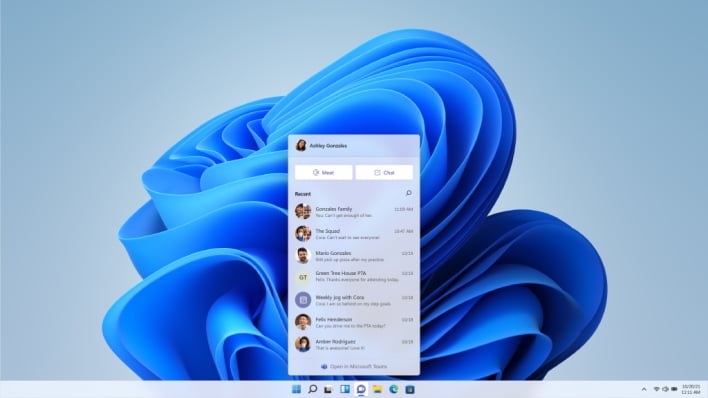 In an interesting move, Microsoft has decided to bake Microsoft Teams directly into Windows 11. As a result, you will be able to easily chat, video call, and collaborate with Teams. While some people may scoff or even be disgusted at this software being added into Windows, it could be a good thing. Perhaps Microsoft views Teams integration as to compete with FaceTime and the messaging functionality that Apple devices have. Whatever the case may be, do not knock it until you try it when it releases. 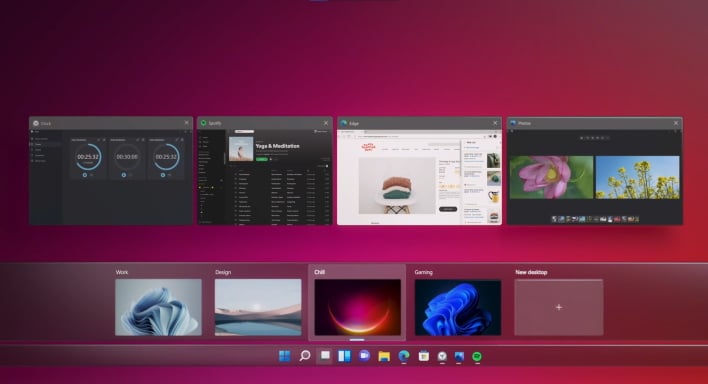 Then, to wrap things up in this category, one of our favorite features from today is the ability to personalize virtual desktops in Windows 11. You can have a work, school, gaming, and leisure desktop with different layouts and background which can be switched between on the same device. This can save the trouble of figuring out what apps or files you need when you want to go from work to play. 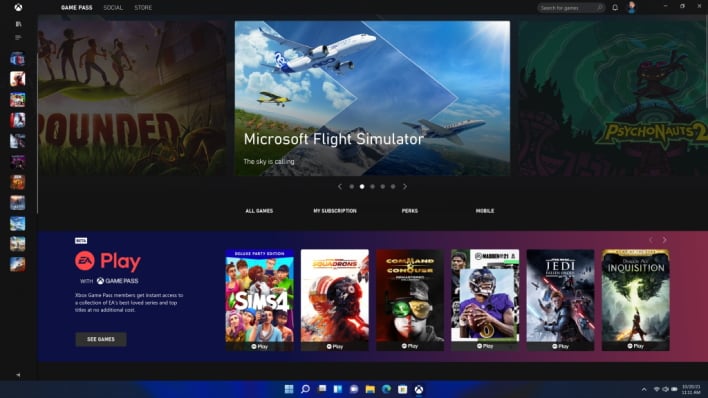 Speaking of going from work to play, Corporate VP of Xbox Sarah Bond showed us some of the new gaming features that Windows 11 will be gaining. She claimed that Windows 11 will deliver “the best PC gaming experiences yet,” thanks in part to AutoHDR. While this is not a new technology, it is new to Windows 11 after formerly being an Xbox exclusive feature. AutoHDR “automatically updates your game’s lighting and color to high dynamic range,” which has thus far received an “incredible response from creators and players,” on consoles.

Bond also announced that high-performance PCs running Windows 11 will be able to load games faster than ever with the next-gen Direct Storage API, which was also formerly a console-only feature. This technology allows games to directly load assets from a NVMe PCIe SSD to the GPU without slowing down the CPU, allowing for lighting fast render and load times.


Apps On Windows Through Microsoft Store 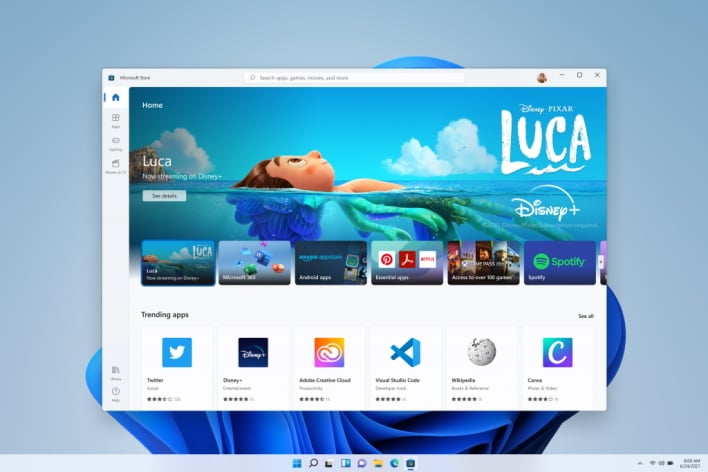 Outside of gaming, users need to routinely download apps from around the web and through the Microsoft Store, but there has always been a preference toward the former. Now, the Microsoft store is getting a redesign to serve trusted apps, new content to watch, and allow users to “create, play, work and learn,” says Panay. This will allow people to access “more apps than ever before,” while also “making all content – apps, games, shows, movies – easier to search for and discover with curated stories and collections.” 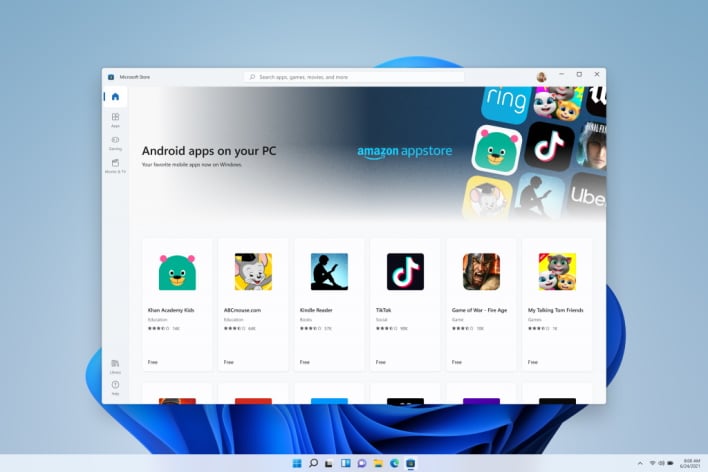 With this, Microsoft is also bringing Android apps to Windows for the first time ever. Through the Amazon Appstore, people will “be able to discover Android apps in the Microsoft Store,” and use them as if they were a regular piece of software.


When Will Windows 11 Arrive? 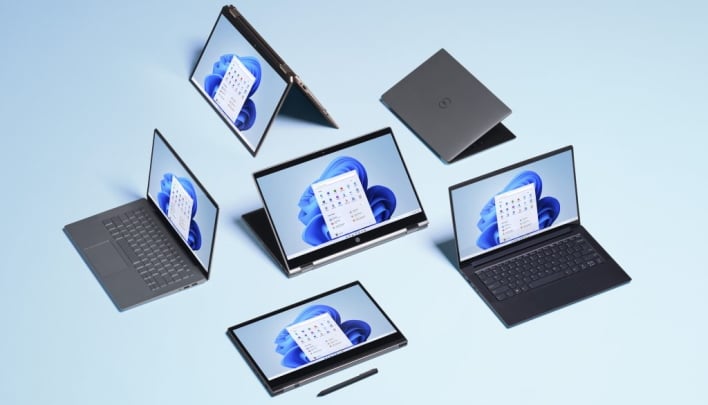 It does seem that Microsoft has a few more tricks up its sleeve, and we only have skimmed the surface of all the features announced, but what we have seen so far has us excited. Hopefully, we will find out more about Windows 11 as we get closer to the launch later this year, but you can find out if your device is compatible and how to get Windows 11 in our article.

Ultimately, this seems to be quite the leap for Windows, and it is nice to see after years of Windows sameness. However, there is still some familiarity and a sense of “home,” as was alluded to throughout the launch livestream. As such, do you think Windows 11 will be your next “home” with all the new features? Let us know what you think in the comments below.