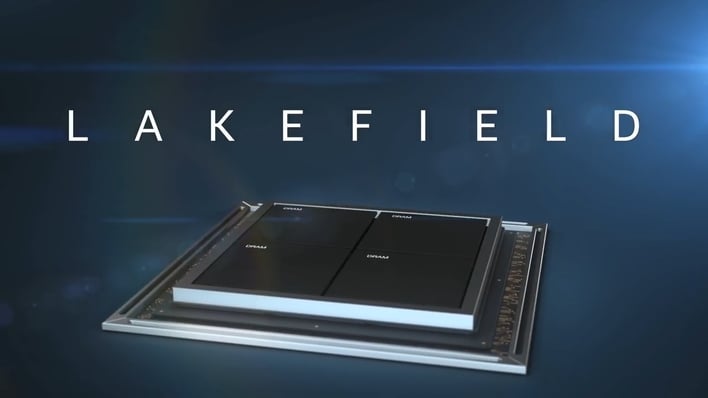 Today is the official launch date of a rather special Intel processor: Lakefield. We heard the first rumblings about Lakefield back at CES 2019, and Intel would go on to detail its Foveros 3D chip packaging, Sunny Cove high performance core along with four Tremont efficiency cores (all built on 10nm process tech), and Gen11 graphics.

With the official launch today comes concrete details on the two chips that will be available to OEMs for ultra mobile devices: Intel's Core i3-L13G4 and the Core i5-L16G7. Both of the SoCs feature a total of 5 cores, which is perhaps an odd arrangement for an Intel processor, with another notable being that there isn't HyperThreading support. Both chips feature 4MB of cache, a low 7W TDP, a graphics clock of 500MHz, and package-on-package fast LPDDR4X-4267 memory.

Intel manages to pack all of this computing power into a package area that measures just 12x12x1mm, or roughly the size of a dime. That includes the LPDDR4X-4267 memory, which negates the need for taking up additional valuable PCB real estate. Intel is really touting the efficiency of Lakefield, which it is positioning as an alternative to power-sipping Arm-based processors. These Lakefield Core i3 and Core i5 processors are capable of operating at a miserly 2.5mW on standby, which represents a whopping 91 percent reduction versus Intel's own Core Y-Series processors.

“Intel Core processors with Intel Hybrid Technology are the touchstone of Intel’s vision for advancing the PC industry by taking an experience-based approach to designing silicon with a unique combination of architectures and IPs," explained Chris Walker, Intel corporate vice president and general manager of Mobile Client Platforms. "Combined with Intel’s deepened co-engineering with our partners, these processors unlock the potential for innovative device categories of the future.”

So far, two products have been officially announced with Lakefield powering them: the Lenovo ThinkPad X1 Fold and the Samsung Galaxy Book S. The former is a Windows 10 PC with a folding 13.3-inch OLED display. The latter is a more traditional clamshell notebook with a 13.3-inch FHD display, Core i5-L16G7 SoC, and up to 17 hours of battery life. That battery life figure is no doubt impressive, but we should mention that the Snapdragon 8cx version (our full review) of the machine can last up to 23 hours per charge.

Lakefield proves that Intel isn’t shying away from the threat posed by power-efficient Arm-based processors, which are now just barely making a dent in the Windows 10 world.

For Intel, Lakefield is definitely going to provide a boost for thin and light machines with incredible battery life, but we’ll have to wait and see how performance stacks up compared to the competition. The good news is, Lakefield will deliver performance based on the native and prolific Windows on X86 ecosystem.