An upcoming Intel "Lakefield" processor has been spotted in another benchmark leak. This time it is the Core i5-L15G7 that is unofficially waving to the crowd, whereas a few weeks ago, the slightly higher end Core i5-L16G7 made a benchmark run in 3DMark's Fire Strike test. Prior to that, it was also shown hanging out in the UserBenchmark database.
Following in that processor's footsteps, the Core i5-L15G7 has now been spotted in the UserBenchmark database as well, as spotted by Twitter user Momomo_US. It is shown as having 5 cores and 5 threads (no Hyper Threading, in other words), with a 1.4GHz base clocks and an average 1.55GHz Turbo clock.
The Core i5-L15G7 is likely to be able to ramp up its clockspeed higher than the average speed indicated in the benchmark listing. In a previous Geekbench leak, it was shown as having a 2.95GHz Turbo frequency, along with 1.5MB of L2 cache and 4MB of L3 cache. It might also have a slightly higher max Turbo clock based on other leaks.
We'll have to wait and see. For now, we know that Lakefield uses Intel's Foveros 3D packaging technology. This is a departure from traditional chip packaging, in that it is a hybrid CPU architecture combining different pieces of IP in a single unit, including ones that might have otherwise been discrete.
"The result is a product that is optimized for power efficiency, immersive graphics, I/O, and memory all in this tiny SoC, which is approximately 12mm-squared. We then pair this hybrid CPU architecture approach with an innovative 3D packaging technique we call Foveros that allows us to actually stack various pieces of IP together in three dimensions rather than two," Intel explained last year. 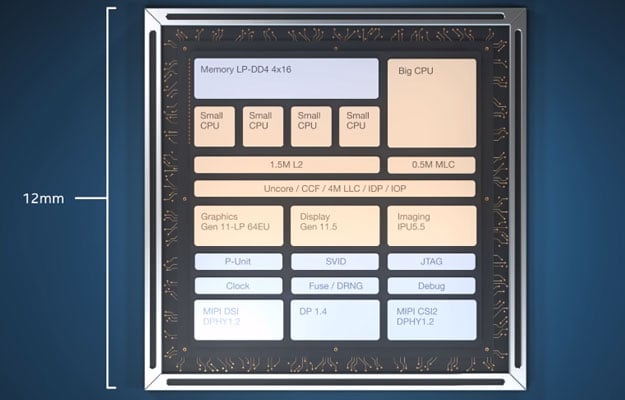 It is somewhat similar to ARM's big.LITTLE approach. In this case, however, Intel is pairing a single high-performance 10-nanometer Sunny Cove core with four 10nm-based smaller cores, as shown in the image above. The chip package also contains integrated graphics, an imaging processor, and a few other bits to flesh it out.

Lakefield is not meant to compete with high-end, high-performance mobile computing platforms. The potential appeal to OEMs is the prospect of building an all-encompassing solution into in tiny space. As Intel states, it's optimized for power efficiency, immersive graphics, I/O, and memory in a small package.
This is shown in the UserBenchmark entry.
"With a below average single core score, this CPU can handle email, web browsing and audio/video playback but it will struggle to handle modern 3D games or workstation tasks such as video editing. Finally, with a gaming score of 41 percent, this CPU's suitability for 3D gaming is below average," UserBenchmark's analysis states.
It's a bit of a generic description, and of course this is a leak. In other words, take this all with a grain of sale.