Trying to keep your head above water when navigating Intel's many 'lake' product names is no easy task, especially as we brace for more of them to show up. Intel 10th generation Comet Lake-S (14nm) desktop CPUs are right around the corner, and so are 11th generation Tiger Lake (10nm) mobile processors. Those tend to dominate the headlines, but today's leaked benchmark news focuses on Lakefield.
What exactly is Lakefield and where does it fit into the land of lakes? Lakefield is a mobile client platform leveraging Intel's Foveros 3D stacking technology. About the size of a fingernail, Lake is an entirely new class of chip with a package area measuring 12mm x 12mm x 1mm. It's also a hybrid CPU architecture combining power efficient Tremont cores with 10nm Sunny Cove cores.
One such product is the unreleased Core i5-L16G7. While not yet official, the Core i5-L16G7 turned up in the UserBenchmark database in January, nestled into what we surmised was a Samsung Galaxy Book S. Now it's back in the spotlight, shone by @_rogame, who spotted the chip in a 3DMark Fire Strike database entry. 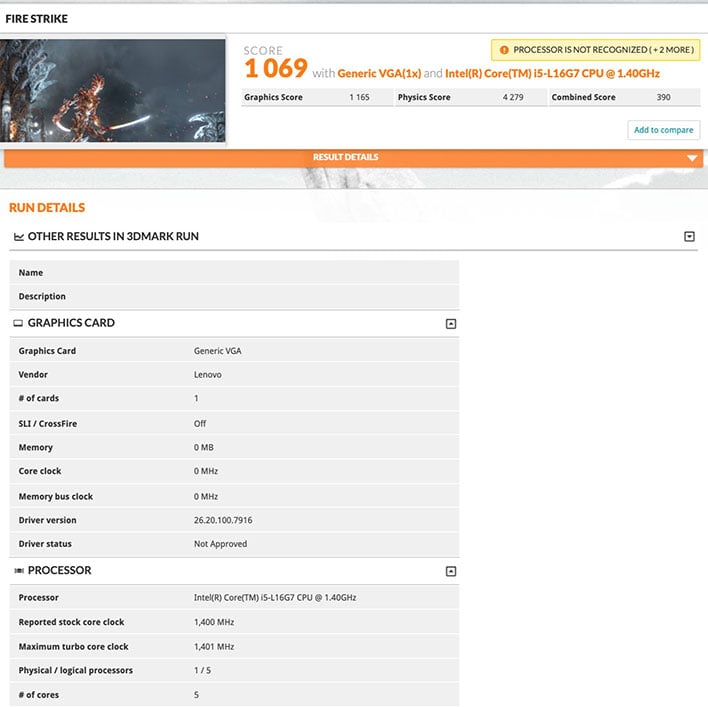 The Core i5-L16G7 is again shown wielding five physical cores and five threads, meaning it does not support Hyper Threading. And like last time, the base clock is revealed to be 1.4GHz. There is no indication of the boost clock this time around, but the UserBenchmark entry indicated the chip can ramp to 1.75GHz. Other leaks have shown it boosting all the way to 2.95GHz.

This time around, the Lakefield part is nestled into a Lenovo system of some kind. In the Fire Strike benchmark, it posted an overall score of 1,069, a Physics core of 4,279, a Graphics score of 1,165, and a Combined score of 390.
The Graphics score is comparable to an NVIDIA GeForce MX250, while the Physics score is in the vicinity of a Celeron G3900, the latter of which is a 2-core/2-thread Skylake processor clocked at 2.8GHz. Nothing mind boggling here, though Lakefield, but we'll have to see how the performance unfolds once the Core i5-L16G7 shows up in an official capacity.