In person events are starting to return and attending PAX East 2022 over the weekend reminded us how much we've missed them. Maybe not in their entirety—the hustle and bustle can be a bit much—but as far as PAX East goes, it was great to see so many gaming PCs on display. This was most evident over at Intel's massive booth, which was by far the biggest at the event.
Intel had a strong show of gaming force at this year's PAX East even in Boston, Massachusetts. It was easily the largest exhibitor taking up huge floor space, roughly three times bigger than AMD's booth by our eyeball estimation. It contained a full stage show and a gaming area with tons of killer 12th Gen Alder Lake systems on display. Like this Maingear Rush PC... 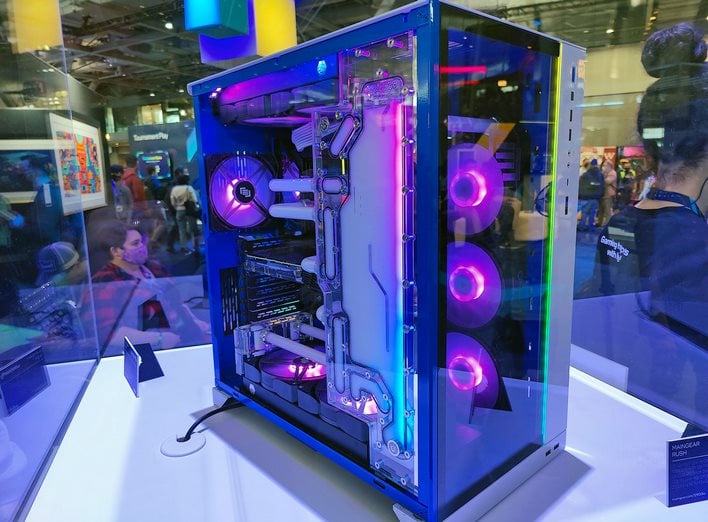 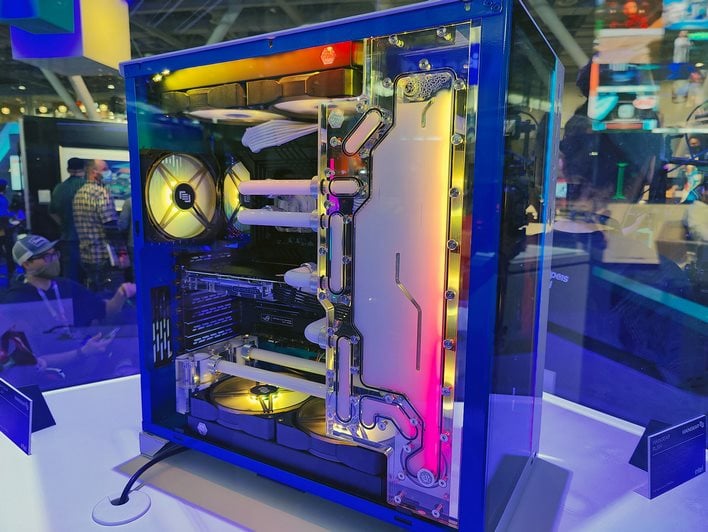 Another angle of the Maingear Rush
It's been a few years since we've reviewed a Maingear Rush PC, and what we saw at Intel's booth assures us it's still an awesome product line. What you're looking at above is the Rush outfitted with Intel's fastest consumer processor available, the recently launched Core i9-12900KS. It's a special edition CPU that's essentially a binned Core i9-12900K validated to run at up to 5.5GHz across one or two cores.
This is flanked by an NVIDIA GeForce RTX 3080 Ti graphics card, a stout GPU for sure, and of course Maingear's custom hardline liquid cooling skills are on full display. It's an absolutely gorgeous gaming PC, and one of several that we saw at the event. 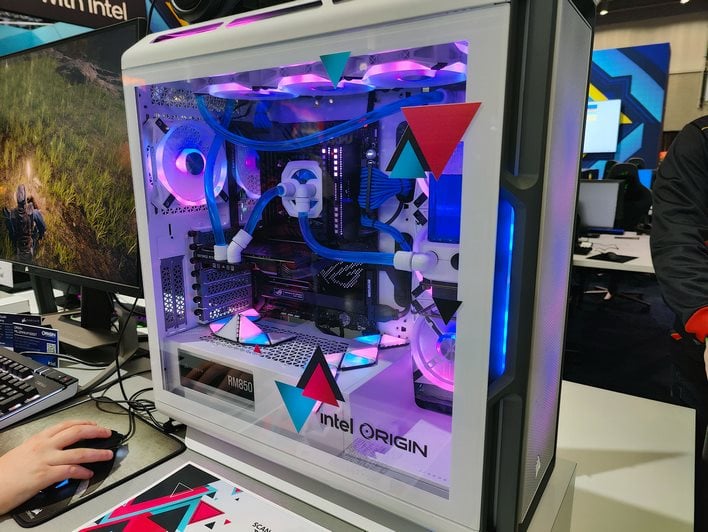 We also spied some Origin PC builds at PAX East, such as the one shown above. This was another build rocking a Core i9-12900KS paired up with a GeForce RTX 3080 Ti. Judging by the craftsmanship on display, Origin PC hasn't lost a step since being acquired by Corsair in 2019.
There was a lot to take in, with dozens of systems from partners that also included EK Liquid Gaming, Newegg, iBuyPower, Thermaltake, and others. 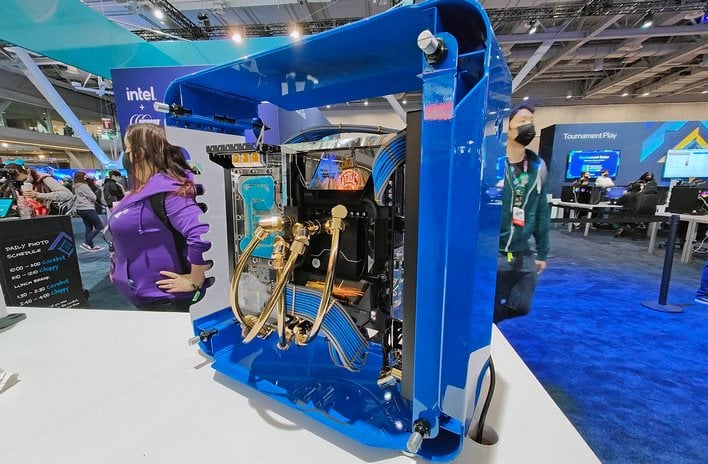 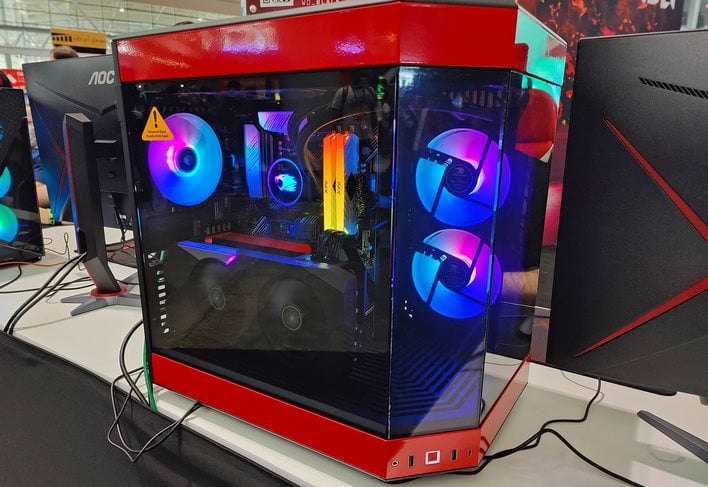 We also got to see iBuyPower's Hyte Y60 chassis in person, as shown above (the red case). This is the one that we previously said reminded us of a fish aquarium. iBuyPower recently launched a version of this system exclusively to Best Buy stores, through its Hyte subsidiary. The case you're looking at is actually the Hyte Y60, which you can customize at iBuyPower's website.
There was a ton on display. In addition, there was a large gaming arena with desktops and laptops for attendees to play games on. Intel also hosted live panel talks on a large stage area, which was also used for overclocking demonstrations, custom live builds, and more. One of the takeaways from all this is that Intel is back to in-person events in a big way. Oh, and there was a robot... 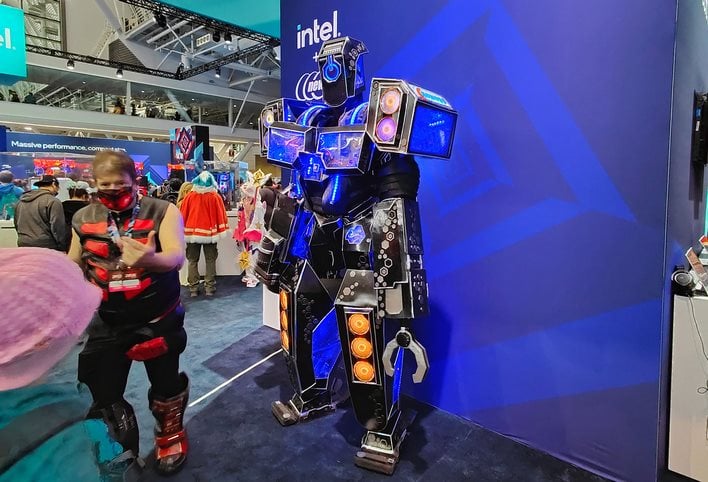 Core Bot stopped by PAX East for a photo op

Underscoring our point above, Intel with the help of Newegg trotted out a 8-foot, 8-inch tall desktop gaming PC transformer called Core Bot for for photo ops. There was a person inside the costume, which weighed 110 pounds and had over 1,000 LED lights. Owned by Newegg, the retailer says it is the most sophisticated robot costume ever created by Extreme Costumes LLC.

Intel clearly wanted a big presence at PAX East 2022 and it succeeded in that goal in multiple ways. And it wasn't It solely about desktops and laptops, either. Intel also showed off custom artwork printed on mouse pads. Here's an example... 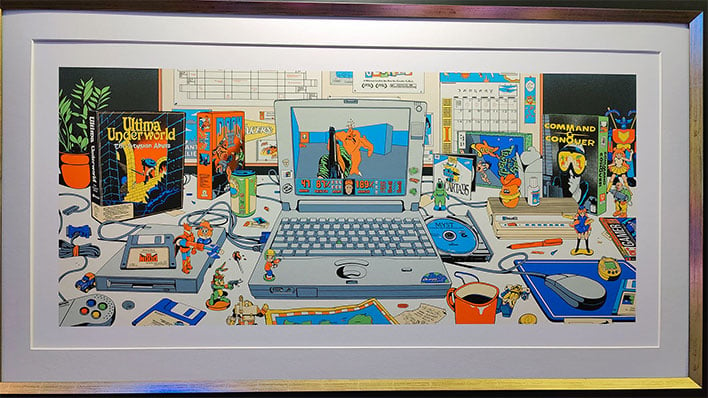 This and others are part of what Intel is calling The Artist Series to "celebrate the performance of 12th Gen Intel Core powered laptops." For this project, Intel collaborated with 20 artists from around the world to create exclusive artwork inspired by its platforms and the gaming experiences they enable.

"These Artist Series designs will be available as special gaming desk mats for a limited time to purchase, with proceeds supporting AbleGamers Charity and the International Committee of the Red Cross," Intel explains.
The biggest takeaway from the entirety of Intel's presence is that it's clear it is investing in the gaming market and gamers in general. Its PAX East floor show, gaming arena, and display space was proof positive of that.