At the risk of sounding like a broken record (probably too late), another leaked benchmark run serves to crank the hype dial on Alder Lake to 11 (or should that be 12, as in 12th Gen?). We've seen purportedly early Alder Lake CPU samples light up the pre-release benchmark charts before, and this latest one over at UserBenchmark throws down the gauntlet.
Did we lose you at UserBenchmark? Fair enough—UserBenchmark has a reputation for favoring Intel hardware, and there have also been questions about the overall consistency of its benchmarking software and results. Those are things to keep in mind.
That said, even accounting for what might be a weighted benchmark, the latest results obtained from Intel's upcoming Core i9-12900K are exceptionally good. Here's a look... 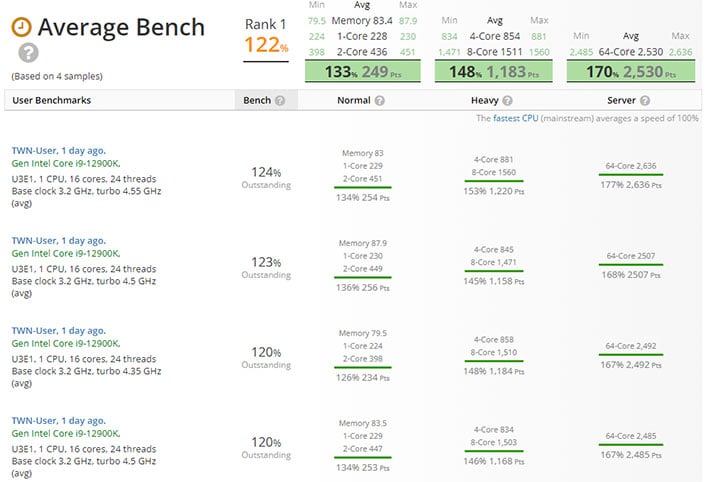 This is one of just a small handful of Core i9-12900K entries in UserBenchmark's database. It has the flagship CPU sitting pretty with a 122 percent average benchmark for a top rank, compared to a 109 percent average for the current flagship, the Core i9-11900K, and 100 percent for AMD's beastly Ryzen 9 5950X.
It doesn't match the 5950X in the 64-core test, though, scoring 2,530 points (170 percent) versus 2,940 points (197 percent). But in the 1-core/2-core and 4-core/8-core tests, it's a different story...
Whether these kinds of results and comparisons for the Core i9-12900K stand up to results seen once it actually launches, we'll have to wait and see. But for now, we can add this to the growing portfolio of leaked benchmarks that suggest Alder Lake will be a big upgraded, as promised by Intel. 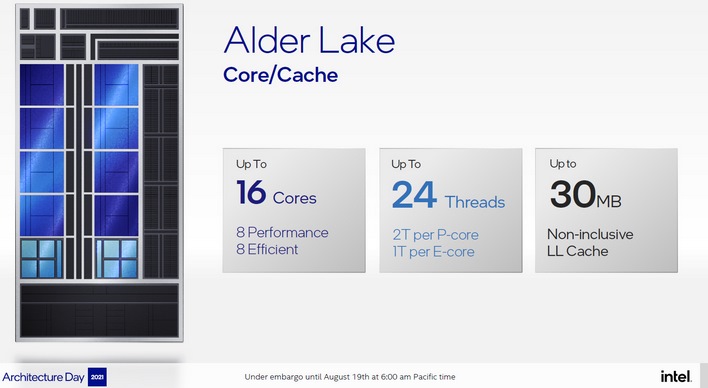 To that end, Alder Lake will be offered with up to 16 cores, including a max of eight high-performance Golden Cove core and eight power-efficient Gracemont cores. The Golden Cove cores support Hyper Threading, so Alder Lake will also culminate in up to 24 threads. Finally, we're looking at up to 30MB of L3 cache.
That is precisely the configuration of the Core i9-12900K (16 cores, 20 threads, and 30MB of L3 cache). What we still don't know yet are what final clocks will end up being, and how pricing will shake out, though there is no shortage of leaks about both.