Maybe you've heard, Intel has a chip architecture on the horizon called Alder Lake. Of course you have, because in addition to Intel having already offered up some details on Alder Lake during its Architecture Day 2021 event (and at other times), a raft of other information (benchmarks, SKUs, and so forth) have been leaked more often than a fish boat with a screen bottom. But have you spied any high resolution photos of an Alder Lake CPU? Probably not, or at least not many. Well, here you go.
At this point in the game, there are plenty of engineering samples in the wild, hence all the leaks. These are necessary for Intel and its partners to test and validate Alder Lake, in anticipation of a product launch this year—rumor has it Intel will unveil some Alder Lake SKUs this month, ahead of retail availability in November.
While we sit back and wait for Alder Lake to make its grand entrance, @yuuki_ans has posted a handful of high resolution photos of an ES chip labeled as QX7H. This is a second revision (ES2) of what is claimed to be Intel's upcoming flagship desktop CPU, the Core i9-12900K. 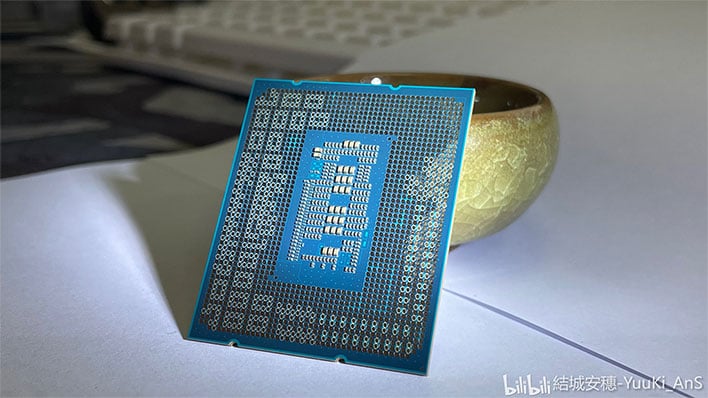 First off, kudos to whoever took these photos. My biggest pet peeve with leaked photography is that, way too often, the quality of the shots simply stink. Like, they look intentionally bad. There are legitimate reasons for this in some cases, such as attempting to protect the source of the item on display. But more often than not, leaked photos are unnecessary blurry, and it drives me batty.
That's the end of my rant. Getting back to these photos, the one above is my favorite of the bunch. It shows the underside of the Core i9-12900K and, to my eyes, is more geek-tastic than looking at the integrated heatspreader (IHS).
Notice there are no pins. Intel's has been rocking and rolling with land grid array (LGA) designs for a long time, and it's rumored AMD will make the transition from pin grid array (PGA) to LGA with its Zen 4 lineup and AM5 platform too. We'll see.
The socket for Alder Lake is LGA 1700. Recent photos of the LGA 1700 socket suggest it will actually house 1,800 pins, 100 of which will go unused by Alder Lake, but would be employed by its successor, Raptor Lake. We'll see about that as well. 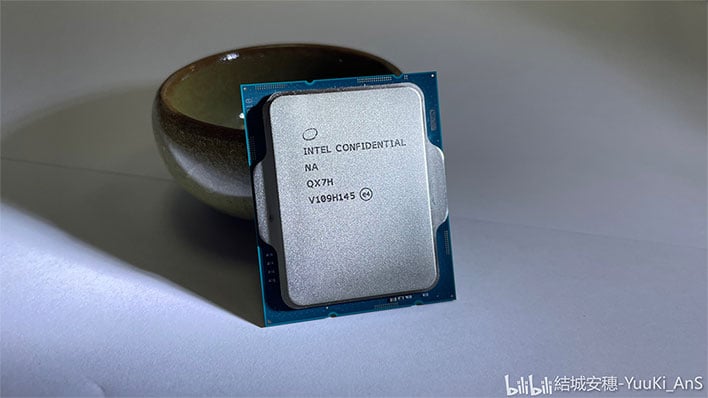 The basket of photos also show the Core i9-12900K from the front and side. This gives us a look at the rectangular shape of the chip, as well as the width, with Alder Lake having a different Z-height than Rocket Lake.
Intel's changes to the physical profile means either having to buy a new cooling solution, or swapping out the bracket hardware. Fortunately, several cooler makers are going to provide free bracket kits for Alder Lake, for those who qualify (most require proof of purchase of the cooler and Alder Lake CPU or Z690 motherboard).
Though Intel has not announced any SKUs or finalized specs, it has made clear that Alder Lake will ramp up to 16 total cores, including eight high-performance Golden Cove cores and eight power-efficient Gracemont cores, along with 24 threads and 30MB of L3 cache. And that is the makeup of the Core i9-12900K.
Leaked Alder Lake benchmarks have cast an encouraging light on Intel's not-yet-released 12th Gen Core processors, and we're cautiously optimistic that it will deliver the goods, especially when paired with Windows 11. Stay tuned.
Big hat tip to @yuuki_ans for corralling these Core i9-12900K photos for us to feast our eyes on.