Gigabyte is all grins and giggles today after partnering with HiCookie, an extreme overclocker, to take Intel's not-yet-released Core i9-12900K to new heights. Set to cement its status as the flagship chip in Intel's Alder Lake stack when it lands at retail, HiCookie revved the Core i9-12900K all the way to 8GHz (8,000MHz), a feat that was never accomplished on Rocket Lake or Comet Lake.
That certainly puts things into perspective. Hitting 8GHz is not the highest-frequency ever for a CPU overclock, but has remained a summit too high for Alder Lake's immediate predecessors. Comet Lake came close, with the highest known overclocking being 7,707.62MHz (achieved with a Core i9-10900K), while Rocket Lake has made it to 7333.56MHz (achieved with a Core i9-11900K), according to HWBot's entries. But neither have made it all the way to 8GHz.
The reason Gigabyte is so excited about the eye-popping overclock is because it was done using its Z690 Aorus Tachyon motherboard. That's every bit an enthusiast board with a 15+1+2 power phase design and high-end components from head to toe. It's built for this sort of thing, and HiCookie put it to good use, no doubt with liquid nitrogen keeping things cool. 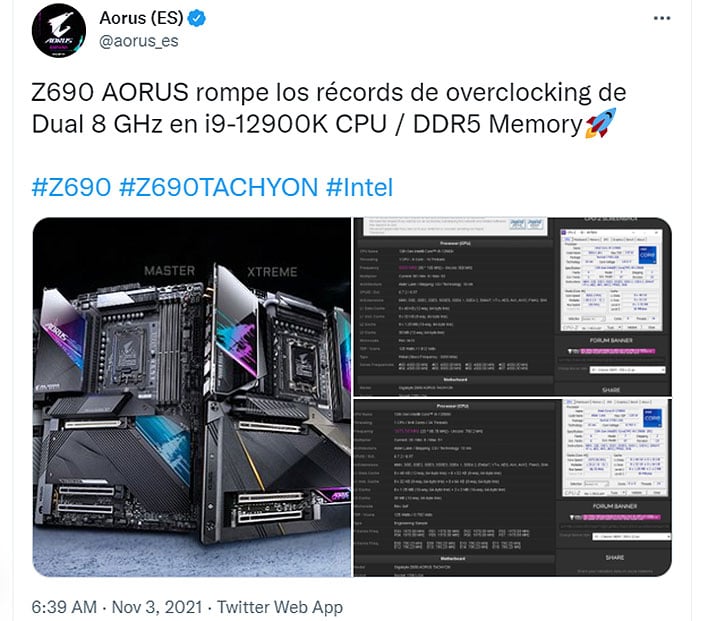 According to the CPU-Z screenshots, the overclocker managed the feat with an 80x multiplier and 100MHz bus speed, with the the V-core pushed to 1.812V. This resulted in a neat and tidy 8,000MHz, which as far as we know, is the highest frequency yet-achieved on Alder Lake.
The Core i9-12900K pairs eight Golden Cove cores with eight Gracemont cores, for a 16-core/24-thread configuration (only the Golden Cove cores support Hyper Threading). At stock settings for the performance cores, the chip has a 3.2GHz base clock and up to a 5.2GHz Turbo Boost Max 3.0 frequency.
In addition to breaching 8GHz with the CPU, HiCookie also managed to crank a Gigabyte DDR5-4800 memory module all the way to DDR5-8300. Going that far necessitated having to relax the timings quite a bit, to 52-52-52-100. But hey, still quite impressive.
If this is the kind of result we are seeing before Alder Lake even lands at retail, we imagine there is even more extreme overclocking headroom, and expect to see more OC'ing records as time goes on. For now, however, 8GHz appears to be the frequency to beat on Alder Lake.