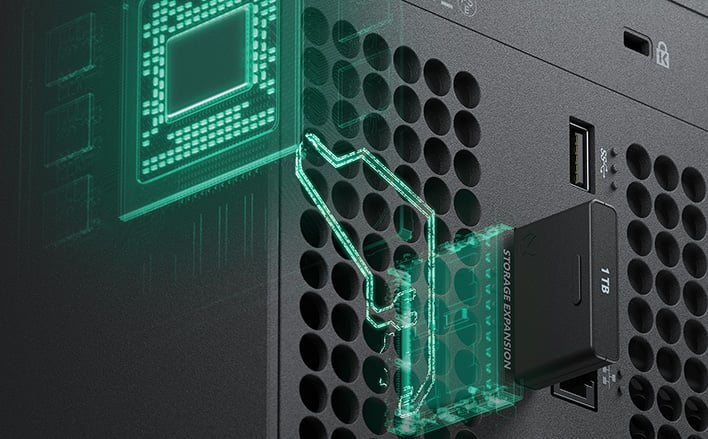 We have heard time and again how both next-generation game consoles will finally leverage solid state drive (SSD) storage to vastly improve game loads and virtually eliminate in-game transitions, but what about the PC space? After all, SSDs have been available to PC gamers for quite some time now. Well, good news—Microsoft is bringing its DirectStorage application programming interface (API) to Windows PCs, and with it comes the promise to "revolutionize PC gaming."
This is exactly what we hoped would happen. As it applies to the Xbox Series X, Microsoft has made a big deal about the system's Velocity Architecture, which paves the way for hyper-fast I/O performance. The Xbox Series X is not just getting an SSD in place of a mechanical hard disk drive (HDD), it's getting a new architecture that will allow developers to make better use of faster storage.
DirectStorage is a key component of the Velocity Architecture, and it is headed to Windows 10 PCs. We could not be more excited, either. Why is that? Consider that when it comes to gaming, there is virtually no difference in performance between a 2.5-inch SATA SSD rated to deliver sequential reads and writes in the neighborhood of 580MBs, and an M.2 NVMe SSD that pushes data through the PCI Express bus at 3,000MB/s, or even higher (the newest PCIe 4.0 models promise 7,000MB/s read speeds).
Microsoft points out that game workloads have evolved, with many of today's titles loading a lot more data than older ones.
"Unfortunately, current storage APIs were not optimized for this high number of IO requests, preventing them from scaling up to these higher NVMe bandwidths creating bottlenecks that limit what games can do. Even with super-fast PC hardware and an NVMe drive, games using the existing APIs will be unable to fully saturate the IO pipeline leaving precious bandwidth on the table," Microsoft explains.
Enter the DirectStorage API. The advancements it introduces to the I/O system will pave the way for much faster load times and more expansive game worlds. According to Microsoft, previous generation games worked with an asset streaming budget of around 50MB/s. Even at smaller 64k block sizes, that only translates to hundreds of I/O requests per second.
"With multi-gigabyte a second capable NVMe drives, to take advantage of the full bandwidth, this quickly explodes to tens of thousands of I/O requests a second. Taking the Series X’s 2.4GB/s capable drive and the same 64k block sizes as an example, that amounts to >35,000 IO requests per second to saturate it," Microsoft says.
It's a huge jump, and while we'll have to wait and see the results to truly believe it, the potential to revolutionize PC gaming is certainly there.
This is not exclusive to running a GeForce GPU, either. It's worth noting that NVIDIA brought up the DirectStorage API when announcing its GeForce RTX 3000 series yesterday (GPU vendors need to have support in hardware and software), but since this is derived from the Velocity Architecture in the Xbox Series X, which is powered by an RDNA 2 GPU from AMD, we can assume it will work just as well on Navi (even if support is not outright confirmed by AMD).
In sort, it's a great time to be a gamer, be it on console or PC.