Heterogeneous CPU architectures could underpin the future of x86 computing, with Intel giving it a go starting with Alder Lake later this year followed by Raptor Lake sometime after, and AMD rumored to be following suit further down the line with Zen 5. As we wait for the hybrid party to begin in earnest, there is some newly leaked information pertaining to both Alder Lake and Raptor Lake to digest.
What exactly are we talking about here? Intel has confirmed that Alder Lake features a hybrid architecture, which entails combining high performance cores with power efficient cores within the same package. This approach is often compared to Arm's big.LITTLE branding for mobile CPUs based on its IP, but will it translate well to x86, and on the desktop?
We are going to find out. A fresh leak highlights details of how Alder Lake and Raptor Lake will present themselves. Starting with Alder Lake, the leaked information highlights both S1 and S2 models that are in the pipeline, with varying core and thread configurations. 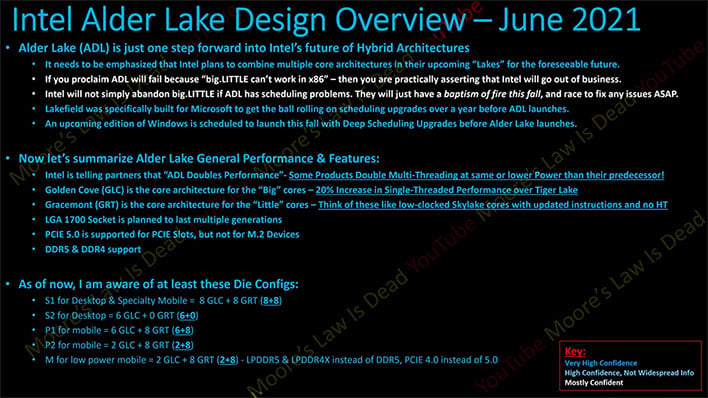 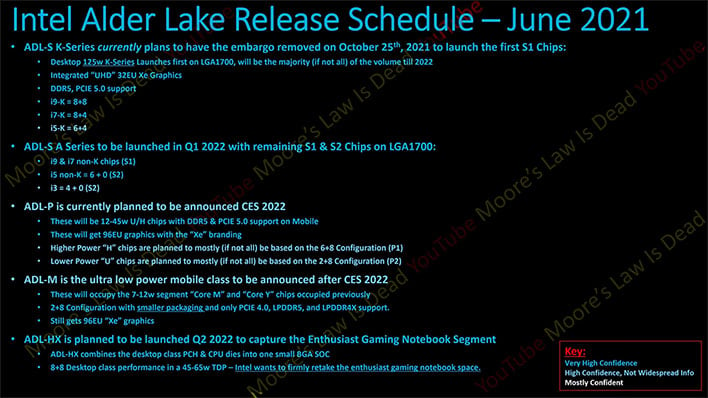 It was rumored Alder Lake would arrive in November, and according to this leak, the embargo will lift on October 25 for the S1 parts, around the same time as Windows 11 or whatever Microsoft has in store. These will be desktop parts that leverage a new LGA 1700 socket. Furthermore, Intel will come out of the gate with Core i9, Core i7, and Core i5 models, all with unlocked multipliers (K-series), featuring DDR5 support, PCI Express 5.0 support, and onboard Xe graphics (up to 32 execution units).
Then in early 2022, Intel will roll out its A-series Alder Lake-S desktop processors, along with mobile (including high performance mobile parts, the HX-series) and other parts scattered throughout the year (and perhaps announced at the Consumer Electronics Show in January).

What about Raptor Lake, you ask? According to the leak, Intel will follow up its Alder Lake launch with another hybrid architecture, called Raptor Lake, set to release during the holiday 2022 season (which translates to November or December). 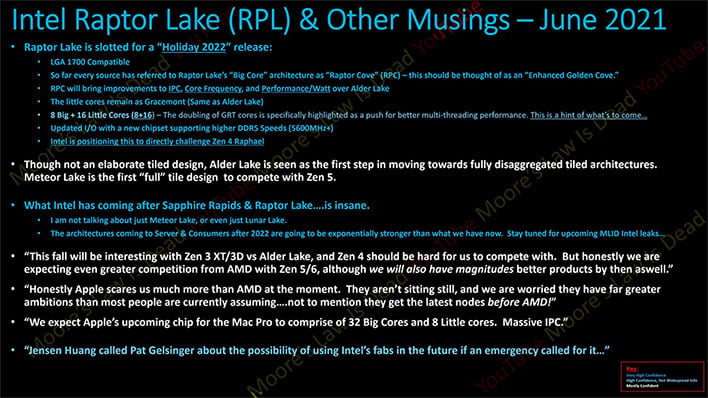 This is not the first we have heard of Raptor Lake. Intel actually confirmed its existence by referencing Raptor Lake in support documents last month, and from what we can tell, it will essentially be a refresh of Alder Lake.
It looks like Raptor Lake will be another LGA 1700 processor, so builders who opt to construct a system around Alder Lake should be able to upgrade with relative ease. Normally this requires nothing more than a BIOS update. The caveat is that new architectures can introduce support for new features, and it is hit or miss whether existing chipsets will support them.
According to the leak, Raptor Lake will deliver big improvements to instructions per clock (IPC) performance and performance per watt compared to Alder Lake, as well as bump up the core frequencies. The improvements could by way of pairing enhanced Golden Cove cores with the same Gracemont cores.
Beyond that, the leaker shared a bit of additional information, though most of it less reliable at this early stage. Nevertheless, taken all together, 2022 is shaping up to an interesting year, and like everyone else, we're very curious to see how the transition to a hybrid architecture plays out in the x86 space.