The first commercial DDR5 modules are now available, but there's only one problem. There are no motherboards or processor platforms to support them… yet. TeamGroup announced earlier this month that its Elite DDR5-4800 modules would be available to purchase by the end of June, and the company wasn't kidding.

Both Amazon and Newegg are currently carrying the Elite DDR5-4800 kit, which includes two 16GB 288-pin ECC unbuffered DIMMs (Part Number: TED532G4800C40DC01). As previously reported, these modules operate at 1.1 volts with timings of CL40-40-40-77. As with all DDR5 modules, the voltage regulator module (VRM) is integrated along with the Power Management IC (PMIC).

This kit doesn't come cheap, as Amazon and Newegg are selling it for $310.99, with the former quoting deliver times of July 19th to July 20th. The latter simply shows the 32GB kit as "Out of Stock" with an option to auto-notify when it is available to purchase.

The first platform to support these new DDR5 modules will be Intel's 12th generation Alder Lake-S desktops processors, which will be paired with new 600-Series motherboards. Not only does Alder Lake-S support DDR5, but it will also be the first consumer desktop platform with PCIe 5.0 support (AMD was the first to the punch with PCIe 4.0). It's rumored that Intel could launch its Alder Lake processor family in October to coincide with the availability of Microsoft's next-generation Windows 11 operating system. 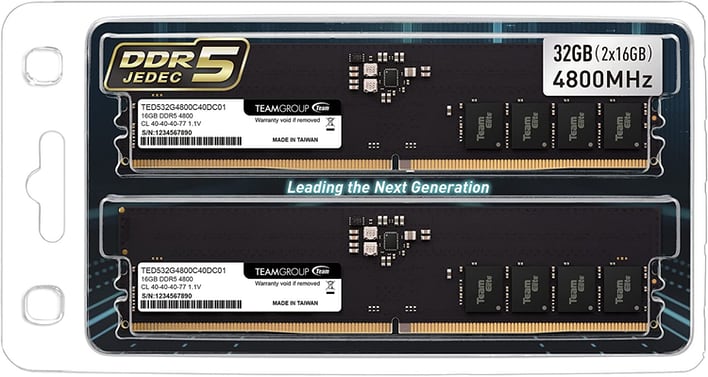 Alder Lake processors will adopt a hybrid big.LITTLE-style CPU arrangement with low-power efficiency cores teaming up with more powerful performance cores. Intel first introduced us to this arrangement with 10th generation Lakefield processors, but they were less than impressive.

We're hoping that Alder Lake will truly show what the hybrid architecture is capable of in the face of immense competition from long-time rival AMD.

Speaking of AMD, its next-generation Zen 4-based Ryzen processors are also expected to adopt DDR5 memory technology, however, they reportedly will not come – at least not initially – with support for PCIe 5.0. We don't know how much of a hindrance this will be to AMD, however, given that PCIe 4.0 is only just now hitting its stride with current-generation graphics cards and SSDs with plenty of additional headroom left.