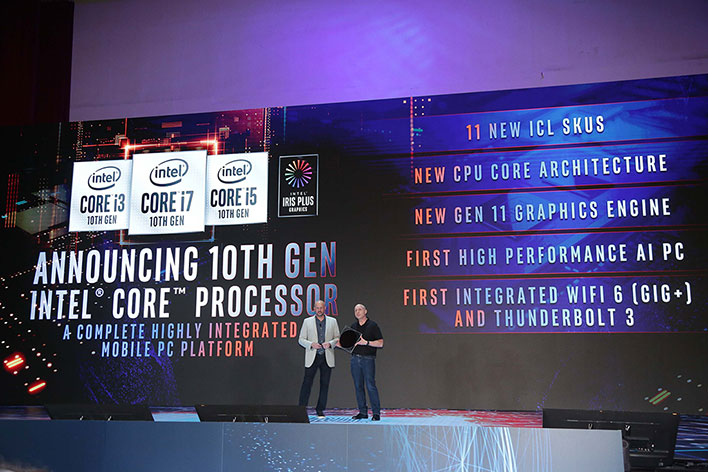 The wait is on for Intel to launch a round of 10th generation Core processors based on its Comet Lake S architecture, and for its hardware partners to deliver laptops built around its Comet Lake H series. Those are all coming, but if you are wondering when they will arrive, go ahead and circle the middle weeks of March in your calendar. Just be sure to do it in pencil so you can erase it, if need be.
To be crystal clear, Intel has not announced a specific launch date—it's only said its OEM partners would deliver Comet lake H laptops soon. When those laptops arrive, the Comet Lake H silicon inside will feature clockspeeds of up to 5GHz and beyond on Core i7, and "even higher clocks on Core i9" models, with 8-core/16-thread processors being available "at scale" (which is Intel's way of saying there will not be a shortage of parts).
According to WCCFTech and the source it spoke with, Intel is planning to launch its Comet Lake S desktop and Comet Lake H mobile lineups in mid-March. The timing is said to compete with AMD's upcoming Ryzen 4000 series Renoir APUs, which the source said will be out sometime in March or April of this year.
Take all this with a brick of salt. While it is certainly plausible we will see Comet Lake S and Comet Lake H debut in mid-March, the article goes on to posit they could be built on Intel's 10nm manufacturing process, just like Ice Lake. As far as we are aware, Intel has not suggest this at any point in time. Current Comet Lake CPUs are built on Intel's 14nm++ node, and we anticipate that being the same for the next couple of batches.
Intel's path to 10nm has been a rocky one. 10nm CPus arrived in volume much later than originally anticipated, and we have yet to see any desktop silicon from Intel make the transition to the denser node. Meanwhile, AMD's Renoir lineup is based in the company's 7nm Zen 2 CPU architecture with refined Vega graphics.

It's going to be interesting to see how Comet Lake H and Renoir fare against one another in the laptop space. A recent benchmark leak claiming to show a Cinebench R20 result for a Core i5-10300H CPU hints at strong performance to come, but whether it will be enough to compete with Renoir remains to be seen.