Intel is in the midst of refreshing its mobile processor lineup with new 10th generation Comet Lake-H series processors, as revealed at CES 2020 earlier this month. At the time, Intel said laptops sporting Comet Lake-H silicon would be arriving soon. As we await their arrival, an interesting benchmark score has trickled into view, with promising performance in tow.
We will get to that in a moment, but first let's take a moment to quickly recap Comet Lake-H. The new processors are still based on Intel's 14nm++ microarchitecture as opposed to 10nm, with TDP ratings of up to 45 watts. These will be available with up to 8 cores and 16 threads. Intel is also promising speeds of 5GHz and higher on the Core i7 stack, and "even higher clocks on Core i9."
Good stuff, though Intel stopped short of announcing specific models and detailed specifications. However, a Cinebench R20 benchmark run for a supposed Core i5-10300H processor has been published. Have a look... 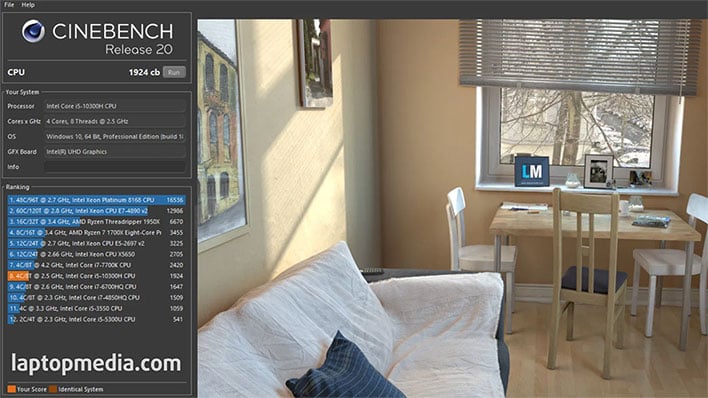 The folks at LaptopMedia claim to have achieved the above Cinebench R20 score using their "own computer equipped with the unreleased Core i5-10300H," which was given to them "by a random man on the street." Read into that what you will, though given Intel has promised Comet Lake-H laptops will be arriving soon, this is one of the more plausible leaks that is out there.
By itself, the 1,924 multi-core score does not mean much. So, we have taken the leaked score and plotted it into a graph next to our own results obtained from actual laptop systems we have reviewed in the past. Have a gander... 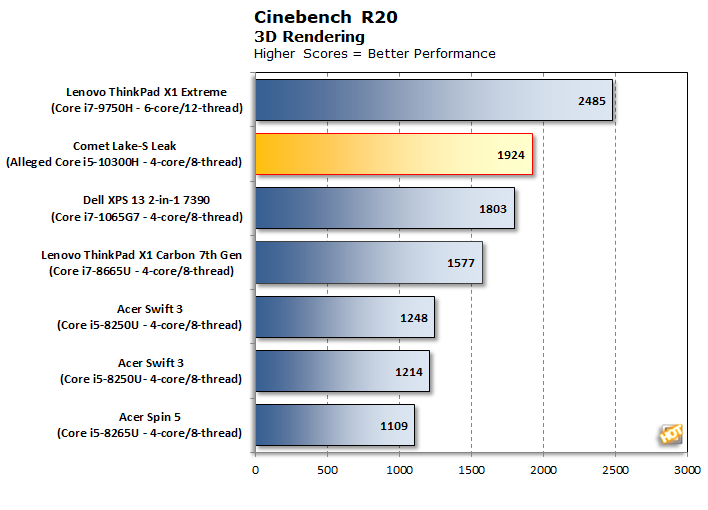 All of the scores in blue are ones we obtained in past reviews, and the yellow bar represents the leaked Core i5-10300H result. Obviously we are unable to verify the Core i5-10300H's score, but assuming it is legitimate, it compares well to previous generation silicon.
The Core i5-10300H is said to be a 4-core/8-thread processor with a 2.5GHz base clock and 4.3GHz maximum boost clock. It's also said to feature 8MB of L3 cache, with a 35W-45W configurable TDP, and DDR4-3200 support.
Looking at the chart above, the leaked result puts the Core i5-10300H ahead of the 4-core/8-core pack, including the Dell XPS 13 (7390) with a Core i7-1065G7, which is a 10nm Ice Lake processor. The leaked result is around 6.5 percent faster.
Naturally, as we move into 6-core/12-thread territory, the Core i5-10300H lags behind. The Lenovo ThinkPad X1 Extreme at the top of the chart simply has more physical cores and threads to throw at Cinebench R20. And unfortunately, we do not have a leaked single-core score to compare, so it is difficult to speculate out Intel's higher-end Comet Lake-H processors will fare against chips like the Core i7-9750H.
In any event, this is an interesting potential preview of performance.