Intel will finally make an earnest run at the discrete graphics market in just a matter of weeks, with its first Alchemist GPUs slated to ship this quarter, followed by add-in cards for desktops in the second quarter and workstation SKUs in the third quarter. It's those desktop cards that we're most interested in, and as we wait, Intel's graphics boss Raja Koduri teased a Beast Canyon NUC powered by Alchemist running Tomb Raider.
Otherwise known as the NUC 11 Extreme, we reviewed Beast Canyon last December and came away impressed with what is a capable small form factor (SFF) system. While compact, it's also the largest NUC to date that is more in line with a typical eGPU enclosure, as it can fit a full-size graphics card. Like Intel's upcoming Arc Alchemist graphics cards. 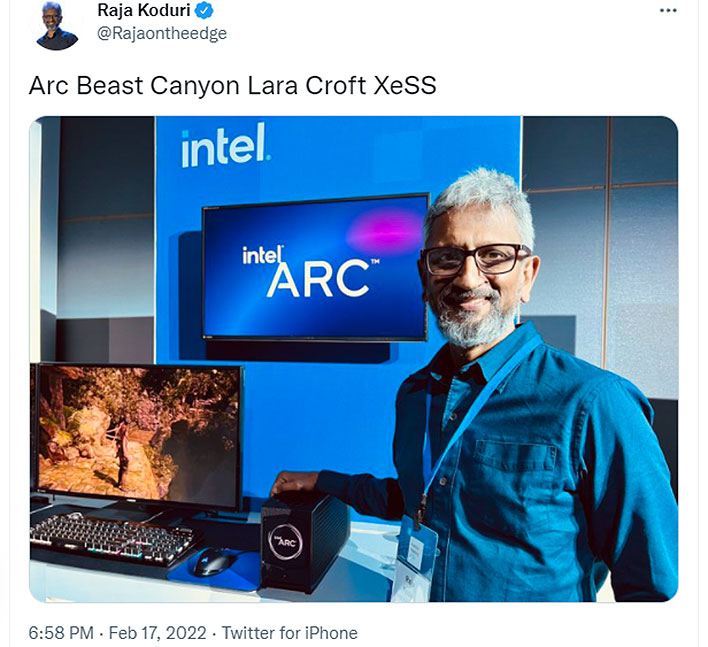 Over on Twitter, Koduri shared a photo of an Arc-powered Beast Canyon PC running Tomb Raider with XeSS. It's just a still shot without any other details, such as the resolution and visual quality settings, average framerates, and so forth. Nevertheless, it's neat to see an Alchemist GPU up and running this close to launch.

Intel XeSS And GPU Driver Support Are Important To Arc

XeSS, or Xe Super Sampling, is Intel's upscaling technology that aims to do the same thing as NVIDIA's Deep Learning Super Sampling (DLSS) and AMD's FidelityFX Super Resolution (FSR) technologies, which is to upscale games for better performance at higher resolutions.
Intel's take on the concept is open source and makes use of AI neural network processing on neighboring pixels to reconstruct and upscale cleaner image edge and texture details from lower resolution game engine input frames. So in that sense, it's sort of a hybrid of DLSS and FSR, though that's oversimplifying the comparison.
Last month, Intel announced that Arc Alchemist has racked up over 50 design wins from leading partners, including several notable developers. It's been confirmed that Death Stranding Director's Cut will be optimized for XeSS, we've seen Intel demo the tech on Rift Breaker, and then there's the above Tomb Raider teaser.

We’re very excited to be partnering with @BandaiNamcoUS for #EldenRing, one of the most anticipated game releases in 2022. Get our Intel day-0 graphics driver on February 24th to ensure your system is optimized for Elden Ring when it launches. pic.twitter.com/hB2coiPQX8

One thing that will be paramount to Intel's ability to compete with AMD and NVIDIA is driver support. Only time will tell how that works out, though it's encouraging that Intel's driver team has consistently rolled out game optimizations on its integrated graphics. Related, Intel announced it partnered with Bandai Namco to deliver day-0 support for Elden Ring when it launches this month.
That boils down to another integrated graphics play, but it also suggests some some Arc-level tweaking, given that the first Arc GPUs will roll out in laptops next month.