Intel is excited about its upcoming discrete gaming GPU for the enthusiast market. This is the company's first credible foray into this space since the i740 back in the late 1990s. These graphics cards will be marketed under the Arc brand name and are underpinned by Xe-HPG architecture.

Intel will also offer its take on NVIDIA DLSS 2.0 and AMD FidelityFX Super Resolution, which it calls Xe Super Sampling, or XeSS for short. We've already seen what XeSS can do when upscaling 480p video content to 4K resolution. However, the same artificial intelligence (AI) neural network that makes video upscaling possible also applies to games. The result is that Intel can take lower resolution input from games and reconstruct when with improved detail at a higher output resolution. In addition, the use of AI networks makes XeSS more closely aligned with NVIDIA DLSS. 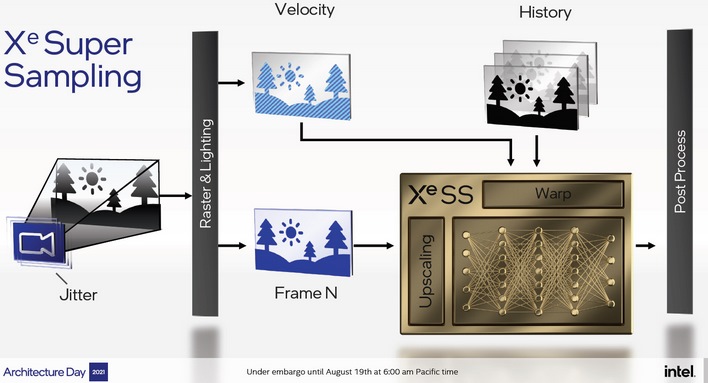 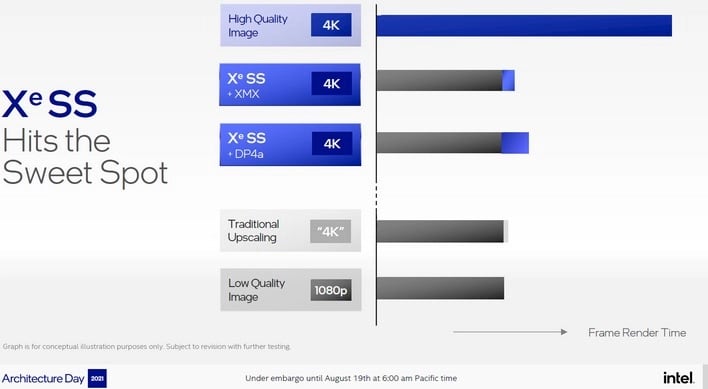 Intel also acknowledged that Xe Matrix Extensions (XMX) that are part of Xe-HPG architecture. Arc cards will leverage XMX to provide XeSS support. However, in an interesting twist, it will also offer a version of XeSS that will work on competing GPUs from NVIDIA and AMD via DP4a instructions, although you'll take a slight performance hit.

We'll still need to see how game developers respond to XeSS either in native form or with the third-party option. AMD is taking a similar open-source approach with FidelityFX SR, so we'll be interested in seeing which gains the most traction in game engines. Intel appears to be coming out of the gate swinging with Arc, as the underlying Xe-HPG architecture definitely has the features to compete with the likes of NVIDIA and AMD. Still, we'll be more interested in seeing if actual performance is up to snuff when cards debut in early 2022.