From Software is a Japanese game development company that's been around for decades. Despite a long and storied history of making games in many genres and styles, action role-playing games with a Western-style high-fantasy theme have been the company's bread and butter ever since 1994's pioneering King's Field. Throughout the PlayStation and PlayStation 2 eras, From Software remained a relatively small developer until the breakout success of 2011's Dark Souls, which grew the company's cult fandom into a massive fanbase culminating in the series' third title, the numerically-suffixed Dark Souls III, selling over ten million copies.


After the release of Dark Souls III, the series creator (and company president) Hidetaka Miyazaki went on record stating that it would be the end of "Souls," and that his team wanted to pursue new things. Indeed, From would go on to release the excellent stealth-oriented title Sekiro: Shadows Die Twice three years after the release of Dark Souls III. It was obvious that the developer would return to the well of ideas that brought it such success in the past, though.
So it goes that From Software's next game, Elden Ring—not to be confused with From's 2000 title Eternal Ring—is an open-world high-fantasy epic that owes more than a little of its heritage to "Souls." From Software's games are unique, and fans of the company tend to be absolutely rabid. Said fans lapped up early previews and promotions for Elden Ring as if they were spilled ambrosia, and with the news of an upcoming chance to play a bit of the game nearly three months before release, it's no surprise that people are paying upwards of $200 for codes to access the "network test" preview.


Checking completed sales for "Elden Ring Closed Network Test Code" shows multiple sales ranging from $19.99 on up. The highest sale we see is $399.99, but there are other listings that went for $355, $350, and several in the $200 range. These prices are obviously even higher than the game itself will run on release in a few months despite the network test likely having little in the way of single-player content and being an unfinished "test" build of the game. Even still, the possibility of being able to play the latest From Software title a few months early is apparently quite tantalizing.


So what makes Elden Ring fans so desperate to play it? It's probably best to start with what makes fans of the so-called "Soulsborne" micro-genre so enthusiastic, but it's a difficult thing to explain in a concise manner. As noted, the games are multiplayer action-adventure role-playing games played from a third-person perspective. That's not unusual in itself, but there are a lot of specific details that define a "Soulsborne" game. Many other developers have attempted—and mostly failed—to mimic the formula. 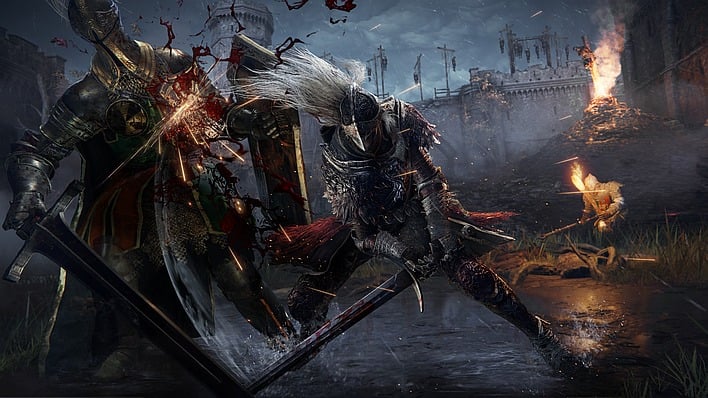 
When talking about what makes them such enthusiastic fans, connoisseurs of From's work will cite the company's exceeding attention to detail—even details that nearly all players will never notice—"do anything" game design that encourages player agency in terms of game mechanics, and an emphasis on environmental storytelling and thematic elements over "cinematic" set pieces and detailed exposition. These elements can be divisive, and From's games certainly have a particular reputation for being rather obtuse—to say nothing of their widely-memed difficulty. Taken from a different perspective, though, these elements set the games apart from other RPGs and third-person action titles.


Elden Ring especially seems to draw on From's rich legacy of past titles both within the "Soulsborne" series and beyond. The game looks to blend elements from Demon's Souls, Dark Souls, Bloodborne, Sekiro, and even From's older games (e.g. King's Field, Kuon) with insights gained from other popular open-world titles to create a rich and sprawling RPG with an emphasis on open-ended exploration. This is something of a new path for From Software, but not as completely as it may seem if you're only familiar with From's recent work—besides the semi-open nature of the extant "Soulsborne" games, the company has done true open-world titles in the past, like Evergrace.
The network test for Elden Ring starts tomorrow, only on game consoles, and Bandai Namco (the game's publisher) has already sent out all of the codes for the test. If you're desperate to try Elden Ring for yourself before its release on February 25th of next year, your only option at this point may in fact be to buy one of those codes off eBay. If you do, let us know what you think in the comments!