Regular Hot Hardware readers and general hardware enthusiasts probably already know this, but SiSoftware is the creator and maintainer of the Sandra utility for Windows PCs. Originally created as a tool to simply capture and display system information (as Windows' own capabilities in that regard were quite primitive when Sandra was new), Sandra is now primarily used as a benchmark suite.

Usually, tests performed using Sandra get uploaded to SiSoftware's database where folks can peruse the results and compare them against other tests. What this ultimately means is that SiSoftware has access to a tremendous database of benchmark results for hardware old and new. Sometimes, those results include tests performed on pre-release hardware, as you've no doubt seen reported many times on this very website. 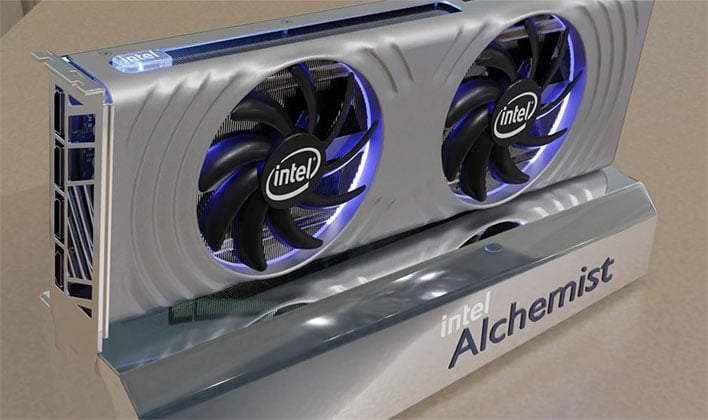 Only a few hardware launches in history have been as exciting as Intel's forthcoming Arc Alchemist discrete GPUs. Besides that these are Intel's first discrete GPUs in decades, they're launching into a market as dry as Death Valley. Perhaps because of that excitement, SiSoftware has taken it upon itself to write up a summary of Alchemist models along with an analysis of Arc A380 benchmark results.

We'll talk about the benchmark data briefly in a moment, but the big surprises in SiSoftware's article are all before you even get to the results. As part of the introduction to the article SiSoftware lays out the specifications and names for the whole Arc Alchemist family:


Much of this data matches what we'd already heard about Alchemist, but some of it is new. For example, we hadn't heard before that Alchemist has absolutely no hardware support for double-precision floating-point math. The names "A500" and "A700" are new to us, too. SiSoftware doesn't explain where it got this information, but our bet is that it comes from benchmarks submitted to the Sandra database.

Other fascinating factoids from SiSoftware's data include the TDP for Arc A380—75W, purportedly—as well as what appears to be a guess at the recommended retail price: $199. In terms of hardware specifications, SiSoftware confirms earlier rumors that the top-end model bearing the smaller Alchemist chip, formerly known as DG2-128, will come with an unusual 96-bit memory configuration, and reports that the GPU will clock up to 2.45 GHz.


As far as the benchmark data goes, SiSoftware compares the Arc A380 in native OpenCL GPGPU performance directly against NVIDIA's GeForce GTX 1660 Ti and GeForce RTX 3050, as well as AMD's Radeon RX 6500 XT. If you've looked at any of our previous coverage of similar results, you probably know how the story goes: not super great, not terribly awful.

The Arc A380 comports itself reasonably well given the pre-release state of the drivers and hardware. There are some strange test results that are probably throwing off the final evaluation, but overall it performs about how we'd expect given the specifications. You can head over to SiSoftware's site if you want to review the data for yourself.