Make no mistake, Intel is supremely interested in competing at the high end of the gaming graphics card market, and being a viable contender, not just an also-ran. Intel also plans to target the mid-range and entry-level segments as well, the latter of which has been overlooked (so far) by AMD and NVIDIA with their latest generation lineups. So what is actually in store from Intel? The latest chatter suggests it has three Alchemist cards on tap.
The information comes from leaker Moore's Law Is Dead and several of what he deems to be some of his "best sources." And they all seem to agree that the top model will feature 512 execution units (EUs). That is a specification we have seen in previous leaks, and it appears to be unchanged as Intel gets closer to finalizing its designs.
To that end, Intel had recently confirmed that its first desktop graphics card for gamers, Alchemist, will not come out this year as previously anticipated, but sometime in 2022. So there is still time for things to change, though at this point, it's probably more about refinements than sweeping design alternations. But only Intel knows for sure, obviously.

Looking at the above slide, a very rough estimate of performance would have Intel's flagship Alchemist SKU coming in ahead of the GeForce RTX 3060 and 3060 Ti, and settling in around the level of a GeForce RTX 3070. That's just looking at the raw specifications—Alchemist in 512 EU form would come in a little lower in TFLOPs while offering superior memory bandwidth.
As we know, TFLOPs is nowhere near the end-all-be-all, particularly when comparing two completely separate architectures. But until Alchemist launches, leaked data of this sort is the best we have to go. In terms of what supposed insiders are expecting, those aforementioned sources pretty much say the same thing—better than GeForce RTX 3060 and 3060 Ti performance, but they're not sure how far above the 512 EU model will land.
Which brings us to the next slide...

Intel Arc Alchemist To Be Split Into Three Tiers Initially 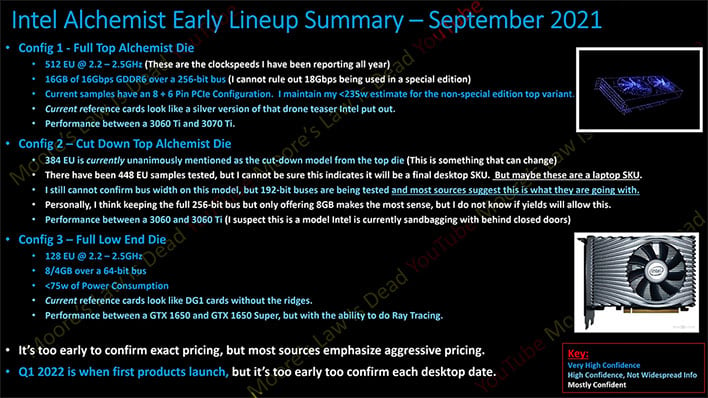 From the information he has received to date, the expectation is that a 512 EU version of Alchemist might even reach performance levels of a GeForce RTX 3070 Ti, saying Intel has even gotten close to GeForce RTX 3080 performance levels on some "golden samples" here and there.
MLID's information is fairly consistent with past leaks that suggested (before the Ti variant came out) that Alchemist would land somewhere between a GeForce RTX 3070 and GeForce RTX 3080. How it actually works out will depend on both the hardware and what Intel can do on the software side, in terms of driver optimizations.
There will also be two other main SKUs, according to the leaked information. At the mid-range level, it's said there will be a version with 384 EUs. As currently planned, this is essentially a cut-down version of the top die. Incidentally, there has also been some chatter of the mid-range part having 448 EUs, but there is not a high level of confidence in that spec (for the final design).
The mid-range offering is said to offer performance levels in the range of a GeForce RTX 3060 and GeForce RTX 3060 Ti. 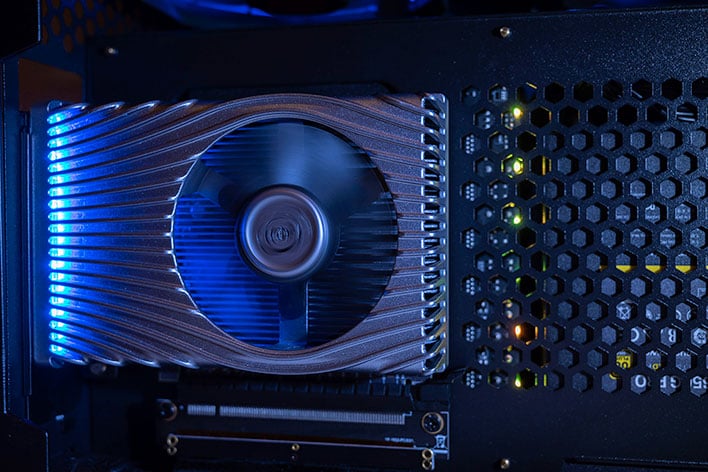 Finally, the low-end die is said to feature 128 EUs and wield 4GB or 8GB of memory tied to a 64-bit bus. This card will come in at under 75 watts. And physically, they are said to look like the early DG1 cards that manifested, but without the ridges. As to performance, think GeForce GTX 1650 and 1650 Super levels, but with dedicated hardware to handle real-time ray tracing. That's actually not a bad place to be at the lower end of the spectrum.
There are obviously a lot of variables at play. Is the leaked info accurate? Will the designs and performance goals change between now and when Intel's Arc cards arrive? How will drivers affect things? And what impact might custom-cooled and factory-overclocked cards from add-in board partners have on all this?
Those are not questions we can reliably answer just yet. However, we should finally find out within the next six months, as it is said these cards will launch in the first quarter of 2022. Here's hoping that timeline sticks, and that Intel is able to put some competitive pressure on AMD and NVIDIA. Which, by the way, both will be launching new cards of their own next year (RDNA 3 and Ada Lovelace), so buckle up and enjoy the ride.