It appears Intel has some very specific branding guidelines for its upcoming Arc graphics launch, starting with Alchemist, according to a leaked document. This is not unusual, but what makes it interesting is that the document, if it turns out to be legitimate, reveals how Intel plans to market and label its Alchemist graphics cards.
There are going to be multiple SKUs, that much is a given. Additionally, Intel has already revealed a high level, multi-year roadmap that extends beyond Alchemist. While Alchemist will kick off Intel's entry (or re-entry, if you're counting Larrabee) into discrete graphics cards, there will be more product designations to follow.
Specifically, as things currently stand, the roadmap looks like this: Alchemist (Xe HPG), Battlemage (Xe2 HPG), Celestial (Xe3 HPG), and Druid (Xe's next architecture).
According to a supposed Intel document obtained by @momomo_us, a prominent leaker, Intel's Alchemist cards will be labeled as Arc a###. The lowercase "a" stands for Alchemist, hints that Battlemage, Celestial, and Druid will be b-series, c-series, and d-series lineups, respectively. And of course the "###" is the model designation. 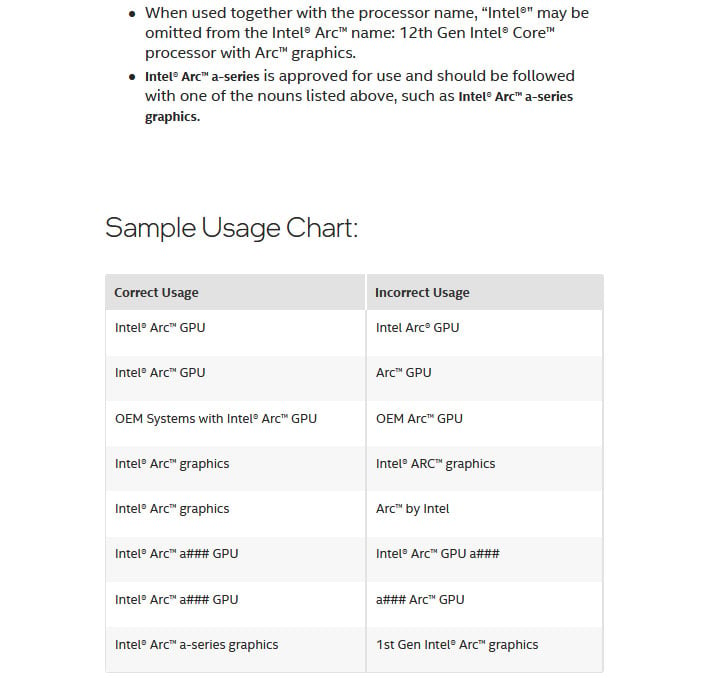 The above document is mostly concerned with instructing Intel's hardware partners how to properly label its upcoming GPUs. For example, "Intel® Arc™ GPU" is the correct designation, whereas "Intel Arc®" or simply "Arc™" are both incorrect usages.
You can see the other proper designations above, but the bigger takeaway from a consumer standpoint is that we're looking at Intel Arc a### cards for its Alchemist launch, followed by Intel Arc b### (Battlemage), Intel Arc c### (Celestial), and Intel Arc d### (Druid).
These are very distinct from AMD's Radeon RX and NVIDIA's GeForce RTX and GTX designations. It also appears Intel will use three numerical digits instead of four, so perhaps we'll see Intel Arc A100 and A200 series cards, as possible examples. That's actually refreshing, compared to how long some of Intel's CPU models names have become.

Not exactly earth-shattering stuff, obviously. But anything related to Alchemist gets our attention, given that this is a major move for Intel, and one that will finally provide some concrete answers (price, performance, and so forth) next year. To that end, rumor has it Alchemist in flagship form will outpace the GeForce RTX 3060 and 3060 Ti, and perhaps give the GeForce RTX 3070 Ti a run for the money.
It won't be the fastest GPU around, in other words, but reaching GeForce RTX 3070 Ti-level performance at the outset would be a respectable achievement. From there, Intel would have to keep the pedal firmly pressed to the metal, because RDNA 3 (AMD) and Ada Lovelace (NVIDIA) won't be far behind.