Hey, have you heard, Intel is launching a hybrid CPU architecture later this year, called Alder Lake. Of course you have, because Alder Lake is not a secret—Intel's already talked about it a few times, albeit in very small doses. Official details are still several months away, presumably, but leaks and rumors offer up a potential glimpse of what is to come. One of the latest leaks highlights a Core-1800 SKU.
It's not clear if Intel will go with a simplified naming scheme, dropping "i9," "i7," "i5," and "i3" monikers (unlikely), of if that is just how early engineering samples are being recognized at the moment. Probably the latter, but we will have to wait and see. In any event, it is said that internally, Intel is calling this chip a Core-1800 processor.
The Core-1800 apparently landed in the hands of Igor Lab's, which says this is a B0 stepping and not a final variant. It features 8 high performance Golden Cove cores with Hyper Threading support, and 8 power efficient Gracemont cores. So the configuration here is a 16-core/24-thread CPU (8 Golden Cove cores + 8 threads + 8 Gracemont cores = 24 threads).
Alder Lake is a heterogeneous architecture, similar in concept to Arm's big.LITTLE approach, in that it pairs high performance cores with lower power cores on the same die. It's paid off handsomely in the mobile sector, but will it benefit desktop platforms? Time will tell. 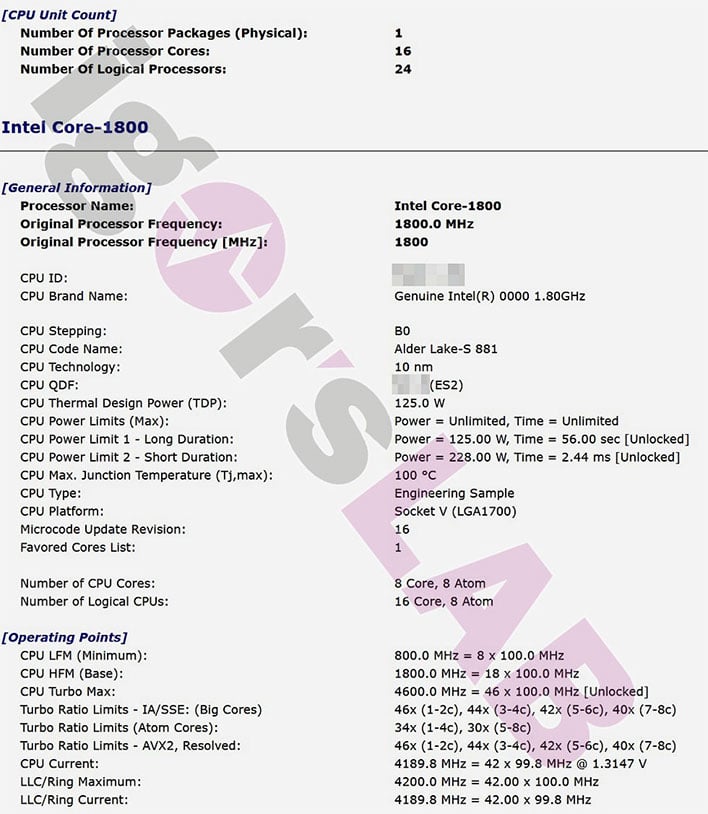 As with other Alder Lake-S processors, the Core-1800 uses a new LGA 1700 socket. The early sample only has a 1.8GHz base clock for the big cores, but can hit some decent turbo frequencies...
Regarding the smaller Gracemont cores, the leaked Core-1800 CPU can hit up to 3.4GHz when tapping four cores, or 3GHz when utilizing all eight cores. Of course, some or all of these specifications are bound to change by the time Alder Lake-S is finalized.
We also get a peek at the power limits of this ES chip. According to the above outline, the Core-1800 has a 125W TDP that it can maintain for 56 seconds, and a PL2 rating of 228W that it can hit for a quick 2.44ms. The temperature limit is configured at 100C.
As first divulged during Intel's Architecture Day 2020 event, Alder Lake is being manufactured on a 10-nanometer Enhanced SuperFin (ESF) processor, and will employ multiple enhancements to Intel's hybrid and 3D stacked chiplet technologies. Intel says it will be optimized to deliver significantly better performance per watt versus Lakefield.
There's still no release date for Alder Lake, but barring any delays, it will arrive before the end of the year.