If taking a sensible approach to plotting your next upgrade, it's too early to decide whether or not to make the leap to Alder Lake. There are questions that remain to be answered. Primarily, they include queries about price, performance, and the release date. Well, it looks like a major US retailer has answered two of those questions ahead of Alder Lake's launch.
Micro Center flipped the switch on a couple of unreleased retail listings, one for the Core i9-12900K and another for the Core i7-12700K. The former is expected to reign as Intel's flagship chip among its 12th Gen Core lineup, so the specifications revealed in the listing don't really come as a surprise. Pricing, on the other hand, has been the subject of numerous rumors and leaks of varying reliability.

The retailer lists the Core i9-12900K at $669.99, with a release date set for November 4, 2021. Actually, we should say "listed," as in past tense, because as we prepped this article, the page was updated to remove pricing and the availability date, though interestingly the actual listing remains live (it shows "5 new in stock" at the time of this writing).
Assuming that wasn't a placeholder price (and we can't say for sure), Alder Lake is set to be a little more expensive than where Rocket Lake landed at launch, at least at the top end. The current (and soon to be previous) generation Core i9-1900K launched with a $539 recommended customer price (RCC), which reflects Intel's wholesale price on trays of 1,000 units. Street pricing typically ends up being a little higher compared to the RCC.
On Amazon, for example, the Core i9-11900K is listed at $544.89 (on sale from $609.99). And at Micro Center, it's on sale for $499.99 (down from $699.99), plus you can save another $20 if bundling it with an eligible motherboard.
One thing worth noting is that Micro Center often has the lowest the prices on CPUs, the catch being they are sold in-store only. As much as we like to be enamored with free shipping at other retailers, the truth of the matter is, the shipping fee is baked into the cost. So if this pricing for Alder Lake sticks, it might be higher at places like Amazon and Newegg—we'll see in a couple weeks, apparently. 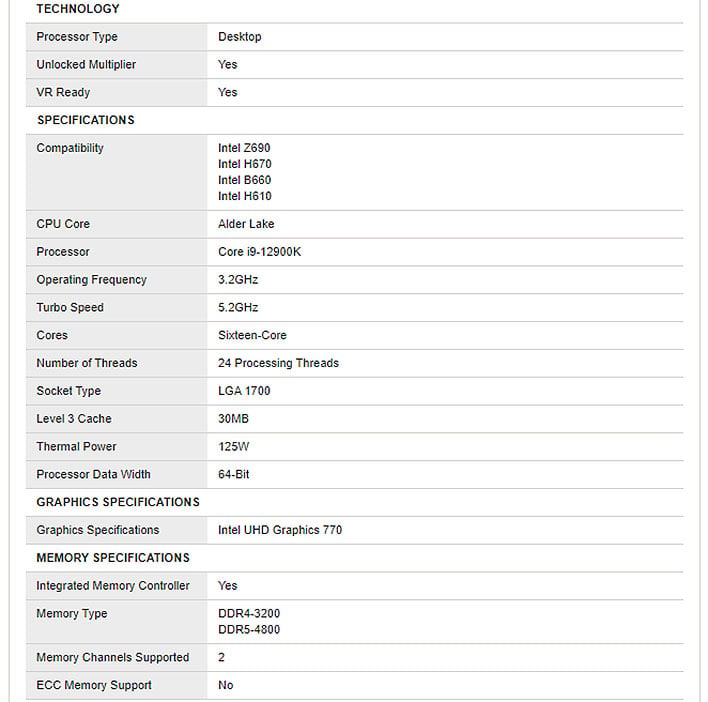 As for the listed specifications at Micro Center, the Core i9-12900K is shown as a 16-core/24-thread processor with a 3.2GHz base clock, 5.2GHz Turbo frequency, 30MB of L3 cache, DDR4-3200 and DDR5-4800 memory support, and a 125W TDP.
The configuration of the cores breaks down to eight high-performance Golden Cove cores with Hyper Threaded support, flanked by eight power-efficient Gracemont cores without Hyper Threading. Intel revealed during its Architecture Day 2021 event that this, along with 30MB of L3 cache, represents a fully-loaded version of Alder Lake on the desktop.

Unfortunately, we arrived at Micro Center's listing for the Core i7-12700K after the pertinent details had already been removed, and the Wayback Machine wasn't any quicker on the draw (womp, womp). However, prominent leaker @momomo_us was up early and managed to catch a screenshot with certain details in tow. 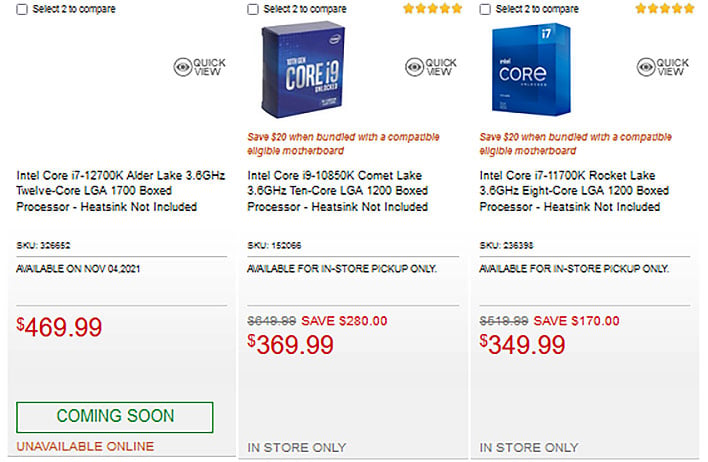 One thing to note is that all the listed clock speeds are undoubtedly linked to the Golden Cove cores. The lower power Gracemont cores will run slower. In addition, there will be varying Turbo frequencies, depending on factors such as how many cores are being utilized and power consumption.
Anyway, this gives us perhaps the most reliable look at pricing to date (again, if they're not placeholders), and what appears to be confirmation of when Intel's next-gen chips will release to retail. We'll find out soon, as Intel is rumored to be announcing its first Alder Lake CPUs next week.