Intel is set to close out its era of 14-nanometer manufacturing with Rocket Lake, due out at the end of next month (barring any last minute delays). After that, the focus will shift to Alder Lake, a hybrid CPU design that figures to be one of the Intel's more interesting launches, for a number of reasons. While Alder Lake is still a bit out in the distance, the leaks are already starting to roll in.
Alder Lake is sort of the next iteration of Lakefield, which itself was the first implementation of Intel's 3D Foveros packaging. Alder Lake, however, will employ multiple enhancements to Intel's hybrid and 3D stacked chiplet technologies, including optimizations to deliver much better performance-per-watt versus Lakefield.
Intel talked a bit about this during its Architecture Day 2020 event last August. The idea with Alder Lake is to pair bigger, high-performance cores with smaller, power-efficient cores in the same package, a concept similar to Arm's big.LITTLE approach that has proven so popular in the mobile space. This could potentially be a boon for laptops, though Alder Lake will also launch on the desktop.
To that end, an interesting Alder Lake processor has popped his head up at Geekbench. Have a look... 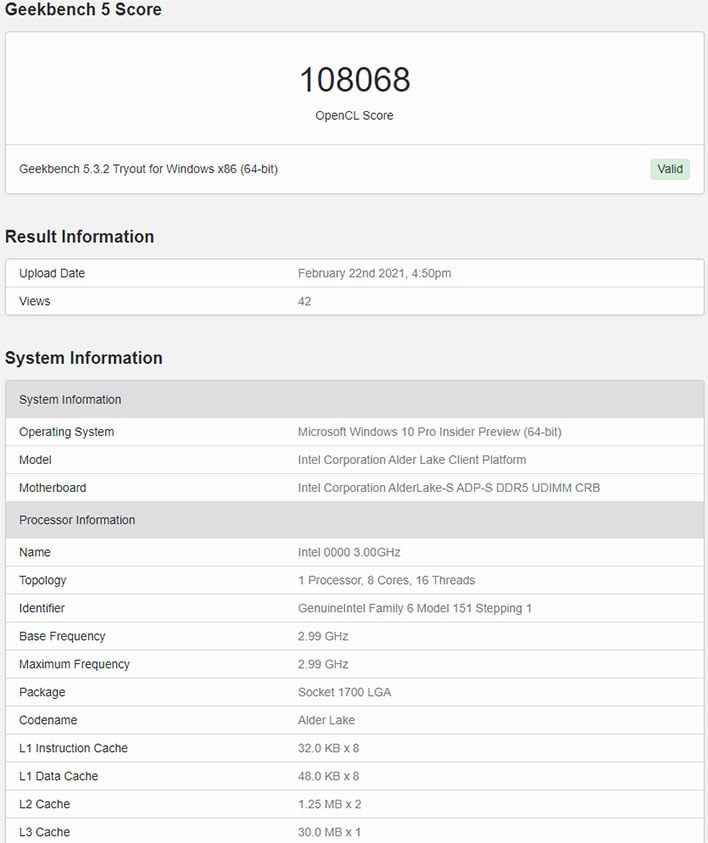 According to the benchmark listing, this particularly Alder Lake SKU features 8 cores and 16 threads, clocked at 3GHz. That is a pretty normal configuration these days, but it stands out from other Alder Lake leaks for that very reason. Since Alder Lake will pair big and small cores together, there are going to be some seemingly oddball CPU and thread configurations.
For example, earlier this month there was another Alder Lake at Geekbench, which recognized the mystery SKU as having 14 cores and 20 threads. Assuming that listing is accurate, it points to an Alder Lake-S desktop chip with 6 high performance cores supporting Hyper Threading, which amounts to 12 threads, plus 8 smaller cores to arrive at 20 threads total (6 high performance cores + 6 threads via HT support + 8 power efficient cores = 20 threads).
This takes some getting used to, because up to this point, the math has been easy—for processors that support Hyper Threading (or in the case of AMD, simultaneous multi-threading, or SMT), just double the number of physical cores to arrive at the thread-count.
Disclaimer time—being a leak, we have no way of knowing if the data is accurate, so keep that in mind. That out of the way, this latest listing seems to highlight an Alder Lake-S processor that only features big cores, rather than mixing both performance and power efficient cores together.
Perhaps this is how Intel will appeal to power users with Alder Lake-S. While a hybrid design makes a lot of sense for laptops, it remains to be seen how truly valuable such a design will be for desktops, which are not reliant on battery life.
This looks to be a high-end configuration, too. In this instance, the 8-core/16-thread Alder Lake-S CPU is paired with an NVIDIA GeForce RTX 2080 graphics card and 32GB of DDR5 memory. That allowed it to post an OpenCL score of 108,068, which is a little higher than the average score (106,101) for that GPU on Geekbench.
The listing also seemingly confirms that Intel will release a new LGA 1700 socket for Alder Lake-S. And while not show, Alder Lake-S is expected to embrace PCI Express 5.0 support as well.