It is going to be several months before Intel releases Alder Lake onto the world, at least within an official capacity. Unofficially, rumors and leaks always precede chip launches, teasing out little nuggets of information that may or may not ultimately prove true. What we have right now in that regard is an Alder Lake-P CPU appearance on a popular benchmarking site.
If you follow these sort of things, then you likely guessed that benchmarking site is Geekbench, which is correct—a Geekbench leak is almost a right of passage for an unreleased CPU that has aspirations of someday becoming an actual shipping processor. We just have to take the specifications with heaping serving of salt, because early engineering samples are not always indicative of the final setup.
In any event, what we have here is an unspecified Alder Lake-P CPU with an oddball core and thread arrangement. Have a look... 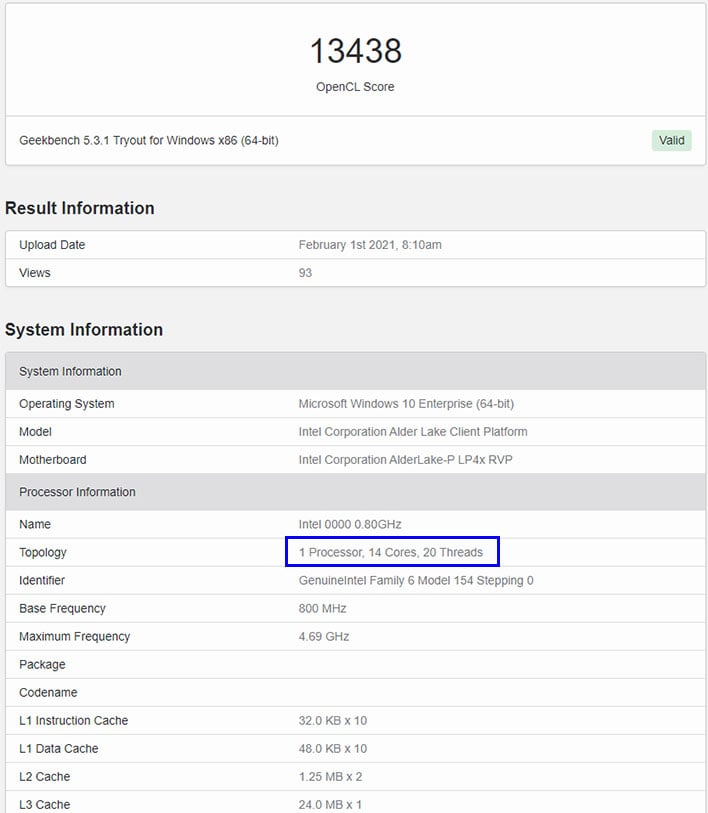 According to the benchmark listing, this Alder Lake-P chip is sporting 14 cores and 20 threads. Current and past generation CPUs either have the same number of cores and threads (no Hyper Threading support), or twice as many threads as cores (Hyper Threading support). That will also be the case when Intel releases its Rocket Lake-S processors next month.
Alder Lake, however, is a shift to a hybrid architecture. Intel will be combining high performance cores with more power efficient cores, similar in theory (though not design) to Arm's big.LITTLE approach that has worked out so well in mobile devices. And this is how the number of threads is not necessarily double the number of total cores (high performance + power efficient).
Assuming this listing is accurate, then we are looking at an Alder Lake-P CPU with 6 high performance cores and 8 power efficient cores, to arrive at the 14-core design. The 6 high performance cores support Hyper Threading, so that amounts to 12 threads, plus the 8 smaller cores each counting as a thread, for 20 threads total. Or put another way, 6 high performance cores + 6 threads + 8 power efficient cores = 20 threads.
The chip is also shown as running at 4.7GHz. There is not much to be gleaned in the way of compute performance, unfortunately, because the benchmark entry highlights the integrated graphics. As far as that goes, the score is a little below the average OpenCL score for Intel Iris Xe Graphics, which Geekbench lists at 14,719.
One other worth noting is that this is presumably a mobile chip, based on the Alder Lake-P designation. This is perhaps where the hybrid design makes the most sense, as it could potentially improve battery life in laptops. However, Alder Lake will also exist in desktop form. Rumor has it Alder Lake will launch in September of this year, with DDR5 in tow.