If things go to plan, Intel will release two new generations of consumer desktop CPUs this year, starting with Rocket Lake-S in March and Alder Lake-S sometime later. How much later? Officially, Intel intends to launch Alder Lake-S sometime in the second half of this year. Unofficially, that launch will take place in September, according to a new rumor.
Alder Lake-S is an interesting dot on Intel's roadmap for a few reasons. For one, the arrival of Alder Lake-S will signify that Intel's 14-nanometer node is firmly in the company's rear view mirror—Rocket Lake-S will be the last of the line for 14nm, at least for major architecture launches, while Alder Lake-S will embrace an enhanced 10nm SuperFin node. But even more interesting is the hybrid design that Intel is embracing.
While not totally accurate, lots of comparisons have been made to Arm's big.LITTLE approach. Alder Lake-S is very much a different architecture, and it stays within the realm of x86. However, it will feature a design that pairs higher performance cores with smaller power efficient cores, in the same CPU package. 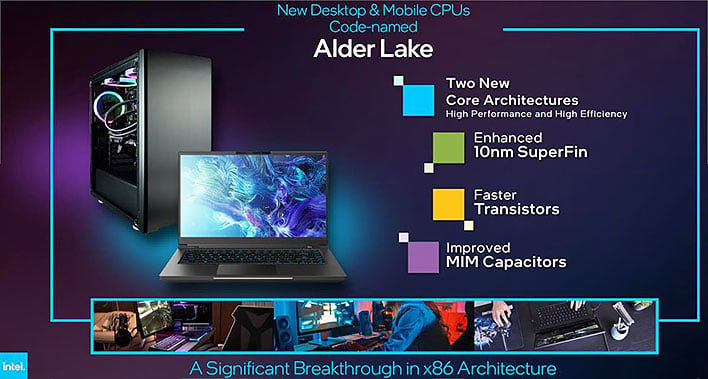 We can already envision how this will benefit traditional laptops and other battery powered form factors (like 2-in-1 devices), just as how Arm's big.LITTLE philosophy has been great for smartphones. But how will it fair on desktop PCs, where systems are always tethered to a wall outlet?
That remains to be seen, and according to a Twitter post by Uniko's Hardware, we will find out this September—that is when they say Intel's 12th Gen CPUs (Alder Lake-S) will arrive, along with a new 600-series chipset sporting an LGA 1700 socket design.
Unofficially, Alder Lake-S has made a few appearances on the web. Most recently, an engineering sample popped up in SiSoftware's SANDRA database, where it was identified as having 16 cores and 32 threads clocked at 1.8GHz to 4GHz. It also featured 30MB of L3 cache, and was accompanied by 32GB of DDR5-4800 memory.
In addition to supporting DDR5 memory, Alder Lake-S is also expected to embrace PCI Express 5.0. That would mark a rather fast transition for Intel, which will only have begun supporting PCIe 4.0 on the desktop when Rocket Lake-S arrives in a few weeks.