If the rumors are true, Intel will formally introduce its first desktop Alder Lake processors this month, including its next generation flagship CPU, the Core i9-12900K. This would be followed by retail availability next month. What will pricing look like, though? Well, some early listings have appear Amazon in different countries, perhaps revealing what is in store.
Over at Amazon in the Netherlands, for example, there are three Alder Lake processors with product pages, Prices are in euros and are as follows... 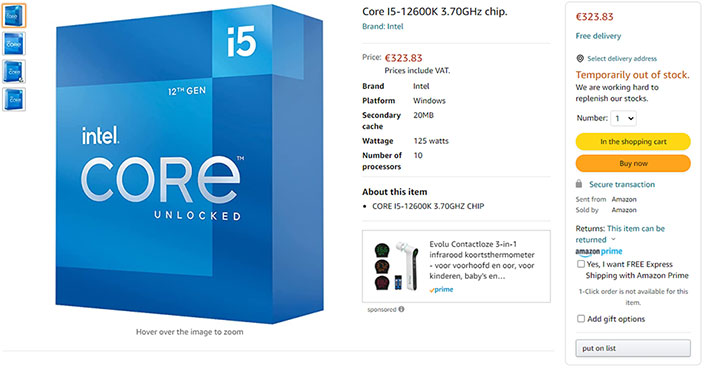 There are a couple of things to bear in mind here. For one, these prices include value added tax (VAT). And secondly, pricing can and does often vary by territory, rather than following a conversion rate. So even though the Core i9-12900K is listed at a price that converts to around $1,005 in US currency, it could be significantly less expensive stateside.
Don't expect it to be a cheap chip, though. The Core i9-12900K is the top Alder Lake SKU, after all, and it will command a price that reflects that fact. How high remains to be seen. 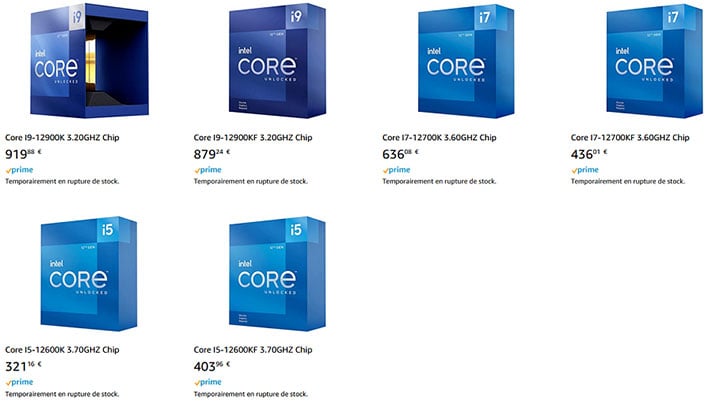 Alder Lake listings can also be found at Amazon in France. It looks like pricing information has been removed, but not before @momomo_us could grab a screenshot (shown above). Here's a breakdown...
And finally, there are also listings at Amazon in the UK. Here's a look...

Pricing and the conversion to US dollars breaks down as follows...
Those are some eye-popping price tags across the board, but let's not hit the panic button. These could be placeholders, or otherwise off from whatever the MSRPs end up being. This also isn't the first pricing leak we have seen.
Last month, a reputable US retailer (Provantage) had listed a bunch of Alder Lake processors with accompanying prices that were more in line with the current generation. For example, it listed the Core i9-12900K at $604.89, compared to $544.98 for the Core i9-11900K (Amazon's pricing at the time). Likewise, the Core i7-12700K was listed at $422.17, and the Core i5-12600K at $295.49.
Those are all much more attractive price points. Whether they are in line with Intel's suggested pricing, time will tell, perhaps towards the end of this month. Then there's also the pricing of Z690 motherboards and next-generation DDR5 memory to factor into the equation of a new build.