The 12th generation Intel Alder Lake processor leaks continue to file in at a rapid pace. Yesterday, Lenovo spilled the beans on its upcoming Legion 9000K (2022) desktop PC powered by Alder Lake, and today retail packaging for the processors has leaked to the internet.

The leak came to us courtesy of VideoCardz, which posted renders of retail packaging for the Core i5-12600K, Core i7-12700K, and Core i9-12900K. There's nothing too surprising about the visuals presented here, with Intel's customary varying shades of blue appearing on the boxes. In addition, the flagship Core i9-12900K receives a unique box design that has an image of an wafer along the side for a bit of visual flare.

The rest of the Alder Lake family, including the Core i9-12900KF (which last integrated graphics), are packaged in a smaller box that isn't as flashy. According to VideoCardz, none of the Alder Lake processors will ship with a reference cooler, so you'll want to pick one up when you're selecting a motherboard and DDR5 memory to go with your system upgrade.

In other Intel news, Alder Lake engineering samples are already appearing for sale on the Chinese black market ahead of their official retail launch. The processors appeared on the Taobao online marketplace, where the Core i9-12900K is selling for around $700. 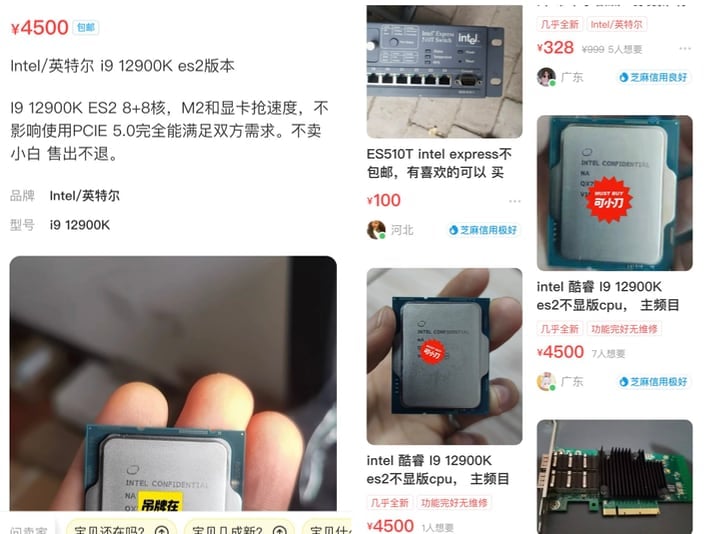 The flagship Core i9-12900K features 8 Golden Cove performance cores alongside 8 Gracemont efficiency cores. Given that the Gracemont cores don't have Hyper-Threading enabled, this is a 16-core processor capable of executing 24 threads. In addition, the processor reportedly packs in a total of 30MB of L3 cache and will feature a turbo clock of up to 5.3GHz.

Intel is expected to announce its Alder Lake family of processors at its "Innovation" event on October 27th. Pricing and availability will also likely be revealed at the event. If leaked information from MSI is correct, the processors (along with the first shipping systems) will arrive on November 4th.