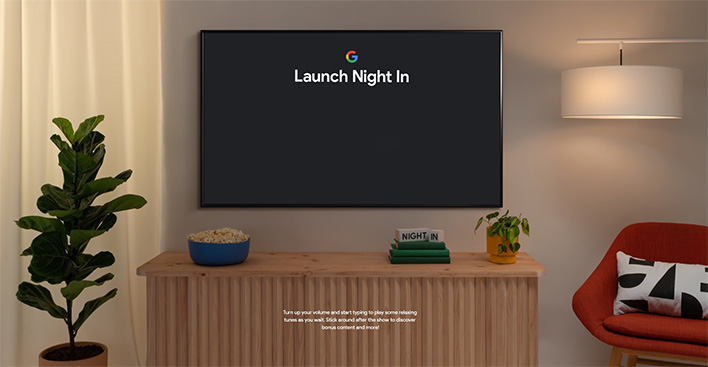 Today is the day Google will unveil its Pixel 5 smartphone, along with some other gadgets. Well, unless there is a last minute change of plan, or a meteor crashes into our rock. But barring a catastrophic event or last-minute audible, the Pixel 5 will become official, and you can watch it happen during Google's "Launch Night In" event.
That is the name of the livestream, which you can catch by heading over to the Launch Night In landing page, or stick around right here with us and watch it from the embedded video below. We will not be serving tea or crumpets, but regardless of where you watch the event (or whether you choose to watch it at all), we will have coverage of the announcements later today.

The livestream will commence at 11:00 am PT (2:00 pm ET). As to what you can expect, Google's invite that was sent out a couple of weeks ago said it will detail its "new Chromecast, latest smart speaker, and new Pixel phones." It is also worth noting that Google has already teased the soon-to-be launched Pixel 5, as well as a Pixel 4a 5G.
This is where we dive into leak and rumor territory. While we have a pretty good idea of what will be unveiled, the specifications are not yet official. That said, past leaks suggests the 5G variant of the Pixel 4a will feature a 6.2-inch FHD+ display (2340x1080) powered by a Qualcomm Snapdragon 765G processor and 6GB of RAM. It's also rumored to sport a 3,800 mAh battery, and possibly a 3.5mm audio jack.
As for the Pixel 5, it is rumored to debut with the same Snapdragon 765G SoC instead of Qualcomm's flagship Snapdragon 865+ (or even the non-plus variant), but with 8GB of RAM and 128GB of internal storage. It is also said to wield a 6-inch OLED panel with a 2340x1080 resolution and 90Hz refresh rate, and a punch-hole at the top for the front-facing 8-megapixel camera.
We are also fairly confident Google will unveil a Nest Audio smart speaker, because a couple of retailers (Walmart and Lowe's) had previously jumped the gun and stock their shelves with the upcoming hardware. A next-gen Android TV-powered Chromecast dongle appears to be on tap as well.