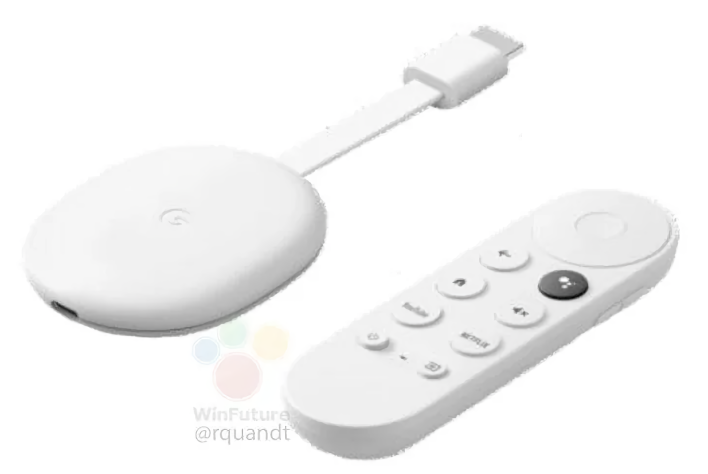 Google is supposedly giving their Chromecast an upgrade with an announcement coming at Google Launch Night In. The Google dongle is getting a full Android TV interface and some new buttons on the controller making it more versatile for users.

In June, we reported on a leak of the new Chromecast codenamed Sabrina. Previously, the Google Chromecast was mainly a device for casting videos from device to a TV, but now it will come with a controller. The dongle itself is not all that interesting, as the hardware has not changed much. The controller, on the other hand, has gotten some new features since June that are worth a look.

Looking at the leaked renders from WinFuture, the remote will feature a circular D-pad in the center for navigating menus, which we already knew of. It will be getting dedicated YouTube and Netflix buttons to complement the new Android TV (possibly rebranded to Google TV) features. Along the side, it will also have volume and power options for the dongle whereas turning off a Google Chromecast was not possible before.

In total, it seems Google is trying to make the new Chromecast more usable and broadly accessible like the Amazon Fire TV Stick. The new Chromecast is expected to launch with a price tag of $49.99 and will come in a variety of colors including pink and blue. In any case, we will not have to wait long as the “Launch Night In” event from Google is coming up soon.