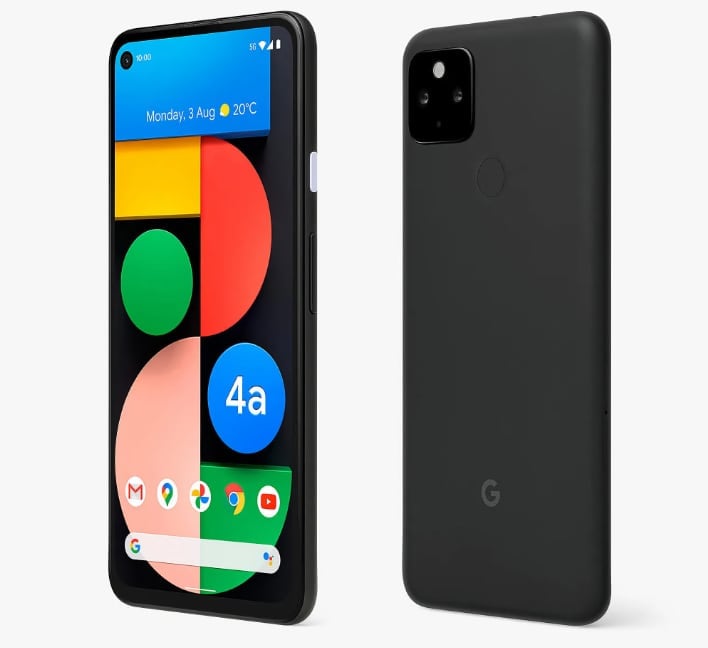 Earlier this week, we took a look at some official renders of the Google Pixel 5, and now it's time for its launch partner -- the Pixel 4a 5G -- to get the same treatment. In this case, the Pixel 4a 5G leaked via UK retailer John Lewis. The retailer by mistake managed to mix in images of the Pixel 4a 5G into a product listing for the lesser Pixel 4a, which is 4G LTE-only.

You can tell that this is the Pixel 4a 5G by the fact that there is a little “5G” symbol up in the status bar. Other items that we spy include the usual contrasting power button, a hole punch selfie camera, two cameras on the back along with an old school fingerprint reader (if it ain’t broke, don’t fix it).

While we get a good overall look at the Pixel 4a 5G in these new renders, John Lewis didn’t provide any details on specifications. However, we’ve seen quite a few leaks in the past regarding specs, so we’re expecting a Qualcomm Snapdragon 765G, which will be shared with the flagship Pixel 5. The Pixel 4a 5G will reportedly pair that Snapdragon 765G with 6GB of RAM, while the Pixel 5 will bump that up to 8GB.

Both smartphones are expected to feature plastic/polycarbonate bodies, will share the same single selfie camera along with the same two rear cameras (12MP, 16MP), and will come with Android 11 installed out of the box. The devices will be unveiled alongside Google’s new Android TV/Google TV based Chromecast and the new Nest Audio smart speaker. The Pixel 4a 5G is confirmed to be priced at $499, while the company has not yet set a price for the Pixel 5.