How To Watch Dr. Lisa Su's AMD CES 2021 Keynote And What To Expect 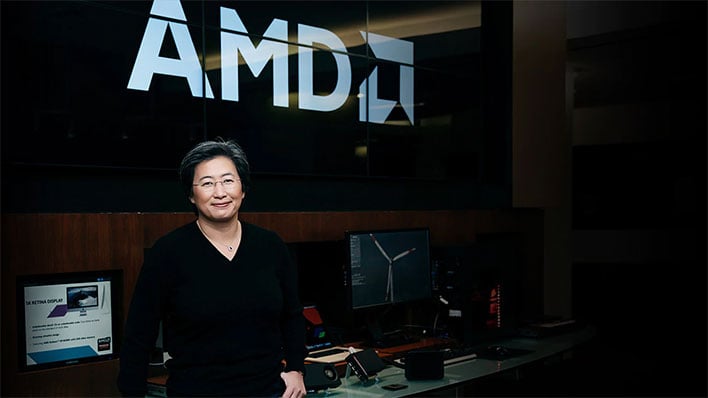 The Consumer Electronics Show (CES) is now in full swing (albeit virtually), and today is a particular busy one. Part of the reason is because AMD's Dr. Lisa Su is scheduled to deliver a keynote, where she will discuss the company's current CPU and GPU portfolio, and almost definitely announce some new stuff as well.
As for when and where you can watch the keynote, it kicks off today at 11:00 am Eastern (8:00 am Pacific, so grab yourself a cup of coffee or an alternative beverage with caffeine). And you can watch it on AMD's YouTube channel. We've gone ahead and embedded the livestream below, so feel free to stay right here with us as the event unfolds.

As for what you can expect, AMD's official statement offers only a vague description of the upcoming keynote.
"During the keynote, Dr. Su will highlight AMD’s high-performance computing and graphics solutions portfolio and outline the company’s innovative vision for the future of research, education, work, entertainment and gaming. You can also expect a showcase of product demos and groundbreaking innovation that AMD and partners are driving through their technologies," AMD says.
Yeah, there's not much there, in the way of revealing information. So...

What To Really Expect At AMD's CES 2021 Keynote

We do not anticipate a huge focus on Zen 4 (maybe a mention a status update), because the first processors based on Zen 3 (Ryzen 5000 series) are barely two months old. They are also in short supply. So in that regard, we are hoping AMD provides an update on the supply situation.
That does not mean AMD will be short on announcements. In fact, they keynote could very well end up a whirlwind of unveilings, starting with AMD's port of its Zen 3 architecture to laptops. The past several weeks have seen a whole bunch of leaks and rumors related to Ryzen 5000 series mobile CPUs, and it seems laptop makers are ready to go with new products.
One interesting aspect of AMD's eventual mobile launch is whether the company ends up splitting its Ryzen 5000 series mobile CPUs into both Zen 3 (Cezanne) and Zen 2 (Lucienne) parts, as has been rumored. Perhaps there will be clarity on that today.
It is also possible that AMD unveils an expanded desktop lineup based on Zen 3. At present, there are just four SKUs—Ryzen 9 5950X, Ryzen 9 5900X, Ryzen 7 5800X, and Ryzen 5 5600X. All four SKUs are incredibly difficult to find in stock from first-party sellers, but even so, AMD may opt to flesh out its Zen 3 family.
We might also see AMD announce a new line of Ryzen Threadripper high-end desktop (HEDT) CPUs based on Zen 3. A recent leak suggests these will start at 16 cores and 32 threads, just like the Ryzen 9 5950X. That was not the case last round. Here's a look at every Threadripper processor released so far...

Expanded memory support and other features could help justify a 16-core/32-thread Zen 3 Threadripper, but we'll have to wait and see.
Finally, AMD is coming off its RDNA 2 launch, with its Radeon RX 6000 series. As is usually the case with GPU launches, AMD has initially focused on higher end SKUs. It's possible that today's keynote could see the introduction lower priced RDNA 2 cards, namely a Radeon RX 6700 series.