You're getting a Zen 3 processor, and you're getting a Zen 3 processor, and YOU'RE getting a Zen 3 processor...sorry, I don't know what came over me there. The truth of the matter of is, Zen 3 is hard to come by right now. It's also an awesome architecture, and is headed to mobile, likely very soon. The continued barrage of leaks says so, like this latest one highlighting a Ryzen 7 5800H.
The "H" designation means it is intended for high-performance laptops, whereas U-series mobile processors are to the go-to silicon chips for thin and light systems. Zen 3 will manifest in both categories, and if the rumors are correct, it will sit alongside Zen 2 within the same 5000 series designation, as odd (and needlessly confusing) as that might be.
But whatever, we can talk about AMD's questionable decision another day, when and assuming if the plan to mix Zen 3 and Zen 2 within the same lineup becomes official. For now, let's focus our attention on the Ryzen 7 5800H, which made an appearance at Geekbench. Have a look... 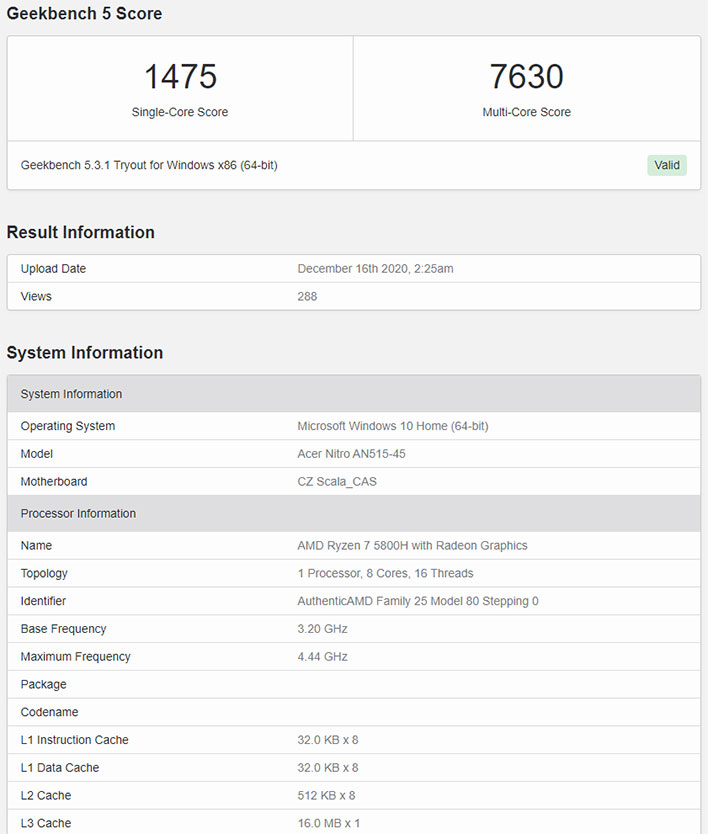 According to the newly uploaded benchmark listing, the chip sits nestled in an Acer Nitro AN515-45 laptop. Geekbench identifies as the specs as 8 cores and 16 threads, with a 3.2GHz base clock and 4.5GHz (rounded up) max boost clock, along with 16MB of L3 cache.
For comparison, the Ryzen 7 4800H (Zen 2) also rocks 8 cores and 16 threads, with a 2.9GHz base clock and 4.2GHz max boost clock, and half the L3 cache at 8MB. So the Zen 3 part is on track to deliver faster clocks, double the cache, and of course a more efficient architecture with an IPC uplift.
The scores look pretty good, too. It posted a 1,475 single-threaded score and a 7,630 multi-threaded score in Geekbench 5. If you search the database for Ryzen 7 4800H scores and limit the results to systems running Windows, single-threaded scores typically range from around 1,120 to 1,200. Multi-threaded scores show more fluctuation, with some in the mid 6,000s and others as high as 8,400.
For a pre-release system using what is probably an engineering sample, this is a pretty good benchmark run. Equally enticing is the prospect of pairing a Zen 3 mobile CPU with one of NVIDIA's upcoming mobile Ampere GPUs, like the ASUS TUF Gaming A17 laptop that leaked earlier this week. Good times are ahead, folks.