Windows 11's Insider Preview builds keep coming fast and furious. Just a couple of weeks ago, the next version of Windows made the shift from developer builds into beta, indicating that Microsoft thinks that it's time to let more people in. The Beta Ring gets fewer builds that have purportedly undergone additional testing in comparison to the developer builds, which have come weekly or even more quickly of late. Build 22000.160 is now available, however, and now it's possible to install the operating system from scratch thanks to a publicly-available ISO.

To get the ISO, you have to sign up for one of Microsoft's Windows Insider Preview channels. The Developer Channel gets the most fast and furious builds with the least internal testing. Next up is the Beta channel, which recently just opened up. These builds have been through a bit more rigorous testing, and should be more stable than Dev builds. Whichever you select, the latest ISO available from Microsoft is for Insider Preview build 22000.132, not the later 160 build. After installing, be sure to select your preferred ring before running Windows Update so that you get the features and builds you want.

Get Windows 11 Installed With The Help Of Your Friend Rufus

The ISO is available for direct download from Microsoft, and can be burned to a dual-layer DVD-R disc. However, most people don't have blank dual-layer discs laying around, and even optical drives are something of a rarity. Fortunately for us, there's Rufus, the USB installer drive creator. Rufus is a very straightforward utility that's free for download. All we needed is a spare USB drive, which will be wiped by Rufus as part of the setup process, and the Windows 11 ISO. 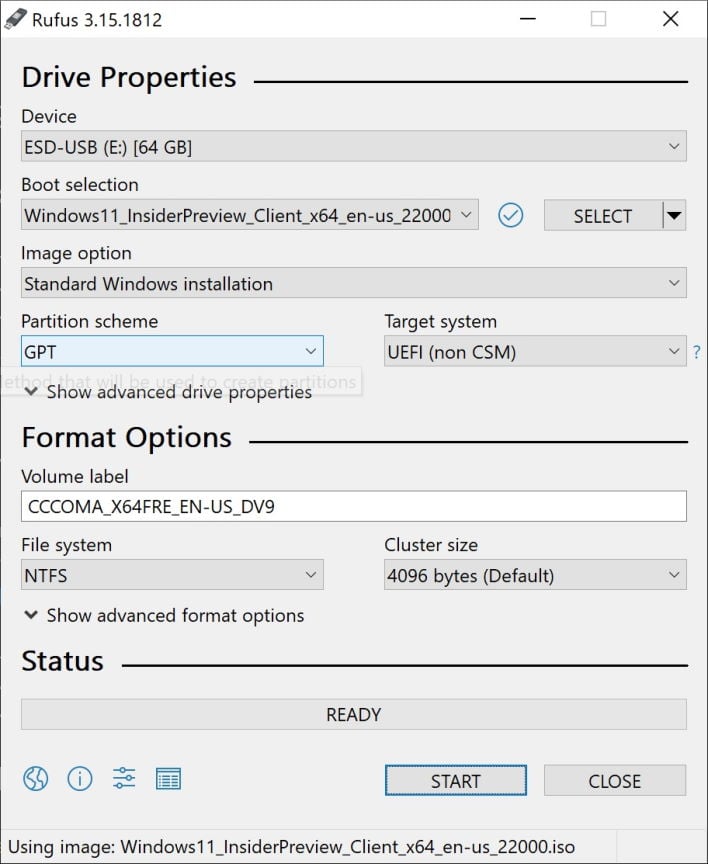 After plugging the drive into the PC, fire Rufus up and make sure the correct device is selected in the Device drop-down. In the Boot Selection picker, choose Disk or ISO image. On the right, click the Select button and browse to the ISO downloaded from Microsoft's Windows 11 Insider Preview page. Everything else sets itself based on the settings found in the ISO, so click Start. Rufus will warn that the process will wipe the drive, so be sure there's nothing important to back up, then proceed. After a minute or so, depending on the speed of the drive, the process will complete and it's ready for a clean install. On most PCs, getting to a boot menu involves pressing the Del or F2 key at startup and picking the USB drive from a boot menu. 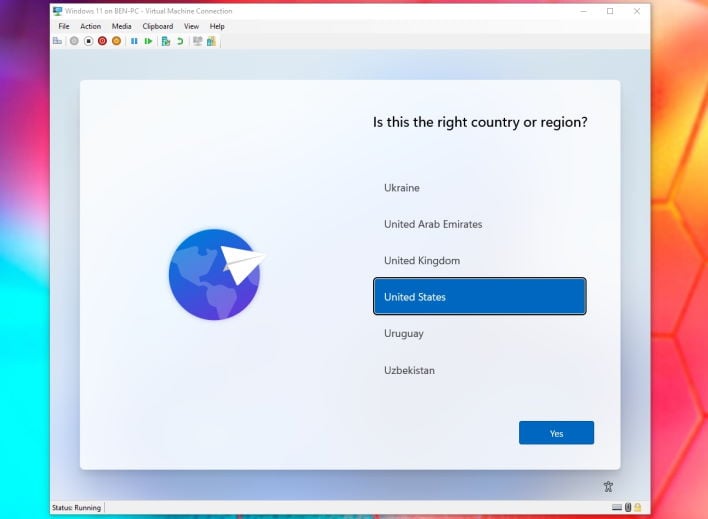 We went through the process with a brand-new virtual machine running on Hyper-V, the virtualization tool built into Windows 10. When everything was said and done, Windows 11 told us that the machine doesn't meet the minimum requirements for Windows 11. The default options when creating a new VM gave the system 12 logical cores and just 2 GB of RAM on our Ryzen 9 5900X testbed with 32 GB of memory. Giving the virtualized guest 8 GB of RAM after installing made the error about requirements go away, which finally allowed Windows 11 to install beta build 22000.160.

The early part of the setup process is identical to Windows 10, but after the system reboots, the new out-of-box experience (OOBE) takes over and it's much more friendly than what there was before. New features have made their way into the setup process, including giving the machine a name. If you like the old naming convention of "DESKTOP-" with a randomized ID, you can select Skip for now, but we'd rather have PC names that are meaningful. 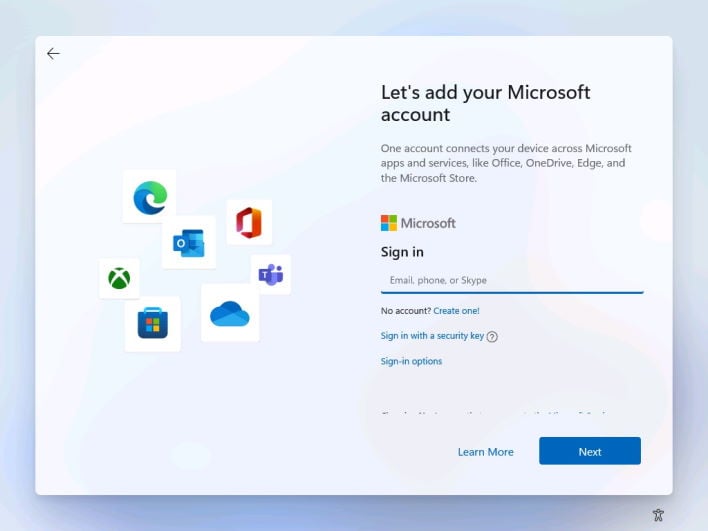 The rest of the process is mostly just a fresh coat of paint on top of steps we've seen in Windows 10. We can confirm that the new OOBE still requires a Microsoft account if it detects an internet connection, so be sure to yank the cord if you want a local-only account. In Hyper-V we could avoid it by selecting "Not Connected" in the Network Adapter section of the settings.


If you're adventurous and ready to dive into the next version of Windows, hit the Insider Preview page and sign up for the beta. For everyone else, Windows 11 will ship late this year, but free in-place upgrades won't roll out via Windows Update until early 2022. Windows 10 will still be supported for years to come, especially for those who have unsupported hardware or lack a hardware TPM connection.