Hot-Swappable SSD Storage Has Been Confirmed For Xbox Series X

You will be able to swap out the external solid state drive (SSD) storage on your Xbox Series X or Xbox Series S without rebooting the console, Microsoft has confirmed. Up until now, we only knew that both consoles would support external NVMe SSDs as a way to expand the internal storage, but the hot swapping revelation is a new development.
Why does this matter? Here's the deal—Microsoft has been making a big deal about the switch to SSD storage with its next-generation game console. Likewise, it has also been hyping its Velocity storage architecture. The two combined come with the promise of virtually eliminating both initial game loads, and in-game transitions. It could also open the door to more expansive game worlds.
The Xbox Series X will ship with 1TB of NVMe SSD storage inside, while the Xbox Series S will feature 512GB (the initial SKUs, anyway). At the outset, Microsoft has partnered with Seagate to ship external SSD modules that will plug into the console. Like the internal SSDs, these are NVMe models, with PCIe 4.0 support. 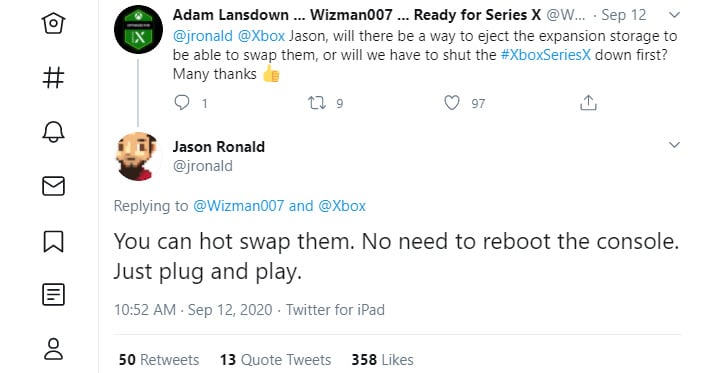 Over on Twitter, Microsoft's director of project management for Xbox, Jason Ronald, confirmed they will be hot swappable. The implication here is that you can store game libraries on Seagate's expandable storage modules and pop them in and out whenever you want. It also means you can more easily bring your games with you to a friend's house to play on their Xbox Series X/S game console.
What we still do not know, however, is how much these modules will cost. Rumors have suggested they could cost $200 or more, which is a bit of a buzz kill. That said, you could still store games on an external USB drive, as Ronald confirmed in separate tweet.
The caveat, though, is that presumably you would not be able to launch games from a USB drive—you would have to move them to the onboard SSD first. That's because USB storage is much slower than NVMe/PCIe 4.0 storage. Nevertheless, it is poised to be a more affordable way of storing more games, should you fill up the onboard storage.
Both the Xbox Series X and Xbox Series S will launch to retail on November 10, priced at $499 and $299, respectively. Preorders will open on September 22.