Half-Life: Alyx Reviews Are In Claiming Valve Has Crafted A VR Gaming Masterpiece 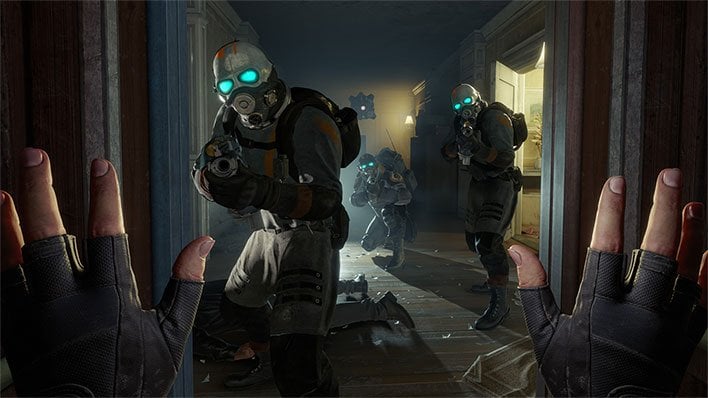 Today is the big day; Half-Life: Alyx has been released. We had no idea that Valve was even working on the game until late last year, and once it was announced, the gamers around the globe lost their collective minds. Rather than being a traditional first-person shooter that is controlled using a mouse and keyboard like Half-Life and Half-Life 2 that came before it, Half-Life: Alyx leaps into the realm of virtual reality (VR).

Being a VR-only game, the hardware requirements (to run the game as the devs intended it) are steep for this latest installment in the franchise, which arrives nearly 16 years after Half-Life 2 was released to the public. For starters, to get the most of the game, Valve recommends that you purchase an Index VR headset, which starts at $499 for just the headset, but costs $1,000 for the full-blown kit with two controllers and two SteamVR 2.0 base stations. And that’s not counting the cost of your gaming rig, which will need to be pretty stout to run the game at full detail levels at acceptable frame rates.

At the bare minimum, this is the hardware that you’re going to need to bring to the table to get going with Half-Life: Alyx (not including the VR headset):

However, reviewers are claiming that you’ll need a GeForce RTX 2080 Ti to game at maximum detail settings with Half-Life: Alyx. That’s a big ask on-top of the VR headset that you have to bring to the table, and the physical space requirements you’ll need to “move around” in the game world. You’ll need a large playing area so that you’re not tripping over furniture or walking into walls.

What Reviewers Are Saying About Half-Life: Alyx

So, what are reviewers saying about the game? Well, there’s almost near universal praise for the game as a whole, with everyone indicating that it’s a worthy addition to the franchise, while providing about 13 to 15 hours of gameplay (depending on your individual pacing). However, not everyone is willing to state that the game rises above its predecessors, or that its full potential has been tapped.

With all of that being said, Half-Life: Alyx is being called the best and most immersive VR game to date and it represents a huge step forward for the genre as a whole. Below is a collection of commentary made by reviewers about Half-Life: Alyx:

Anyway, the scale is impressive and the characters are expressive and Alyx is certainly proof of what can be done in virtual reality with near-infinite time and money. It is every bit the showcase piece Valve (and Oculus) needs. That said, it’s fundamentally Half-Life in VR. Valve argued you couldn’t play Alyx on a traditional monitor, and that’s certainly true of the game as-designed. It’s built around the Index’s capabilities, be it ducking behind cover, or doing one of the myriad “hacking” puzzles that require manipulating a hologram in 3D space. -- Hayden Dingman/PC World

Back when VR first became a real thing and we all started spitballing which game worlds we’d most like to be fully immersed in, Half-Life topped my list (tied with BioShock). It took a few years, but Half-Life: Alyx has more than realized that potential. With it, Valve has set a new bar for VR in interactivity, detail, and level design, showing what can happen when a world-class developer goes all-in on the new frontier of technology. -- Dan Stapleton/IGN

Alyx is a triumphant return; a stunningly produced, meticulously refined capping off of the past four years of VR learnings. Its 10+ hours of best-in-class combat, evolving level design and, every so often, moments of truly inventive ideas swiftly establishes it as a new benchmark for the platform. -- Jamie Feltham/UploadVR

While it’s about as long as the landmark Half-Life 2, with my game clocking in at 15 hours, it doesn’t feel as big or as narratively and mechanically fresh. It advances the series’s main plot, but it doesn’t come close to resolving it. But if you keep these admittedly big reservations in mind, Alyx is a worthy addition to the Half-Life universe. It’s not just a good VR game; it’s a good video game, period. -- Adi Roberston/The Verge

Half-Life: Alyx is a must-play video game for anyone in a position to do so. If you already have access to the required technology—a full VR headset system, a robust computer, and a reasonable amount of space to move your arms while otherwise blind to the real world—you are in for a video game that pushes the notion of "full-length VR adventure" to its limits. -- Sam Machovech/Ars Technica

If you have the means – with respect to the required hardware -- and have already purchased Half-Life: Alyx, feel free to comment below about your experiences with the game (you can purchase it here on Steam for $59.99). And be sure to stay tuned for our own thoughts on the game and what it means for the future of VR gaming.