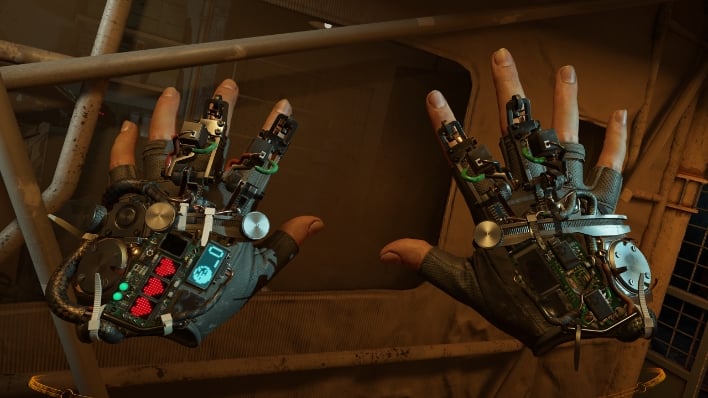 The excitement surrounding Half-Life: Alyx is starting to ramp up as we get closer to the game's March 23rd release date. For those that haven't been keeping abreast of the game's development, it's a virtual reality-only title that takes place before the events in Half-Life 2.

Valve today is giving us another look at what to expect with Half-Life: Alyx courtesy of three new gameplay videos. All of the things that you've come to expect from the Half-Life franchise are seen in the videos including those annoying head crabs, health stations, and various puzzles that you'll find along your journey.

In the first video seen above, you start off on a subway car where you encounter a number of zombies (with head crabs attached). You can also see one of the three movement styles that can be used in the game. With Teleport, you can basically instantly leap from one area to the next, cutting down on motion sickness. Continuous movement is more akin to how you would normally move around in an FPS game, while Shift will zoom your position from one place to another.

The second video shows some puzzle-solving skills that you'll need to complete the game, while also dodging even more head crabs. We also see the reappearance of the absolutely disgusting barnacle with its dangling tongue that is just looking to pull you upwards to feast on your body. Side note: this thing scared the s**t out of me the first time I encountered it in the first Half-Life.

The last video takes place outdoors, and features a lengthy gunfight with Combine soldiers. We won't give away everything that happens in the above videos; we'll let you experience them for yourselves. But for those that loved the action of the Half-Life and its sequel (along with the add-on packs), you're gonna love what Half-Life: Alyx has to offer.

Each video is between 2 to 4 minutes in length. One thing that you'll notice right away is that Alyx frequently speaks during the game, which is something that didn't happen with the Gordon Freeman protagonist in the previous games despite the horrors he witnessed.

As we've previously mentioned, be sure to check out the previous installments in the Half-Life franchise for free direct from Steam. All of the below titles are available free-to-play up until the release date of Half-Life: Alyx.

We should also note that Half-Life: Alyx is being included for free for anyone that purchases a Valve Index VR headset.