We are eagerly anticipating all of the new PC hardware announcements that are around the bend, many of which will be shouted out at the Consumer Electronics Show (CES) next week. Will Intel introduce its 11th Gen Core processor lineup (otherwise known as Rocket Lake-S)? Time will tell, but interestingly, what appears to be official press render of Gigabyte's upcoming Z590 Aorus Xtreme motherboard has popped up online.
If you have not been following the CPU scene all that closely, Intel has already confirmed some details about its next-gen CPUs. According to Intel, its Rocket Lake-S chips will deliver a double-digit gain in IPC (instructions per clock) performance, while also introducing PCI Express 4.0 support to the desktop just as AMD has already done.
Rocket Lake-S will retain the same LGA 1200 socket design as Comet Lake-S, but Intel will still be introducing new chipsets, including Z590. It seems motherboard makers are ready to go with new offerings based on Z590, as the following image suggests... 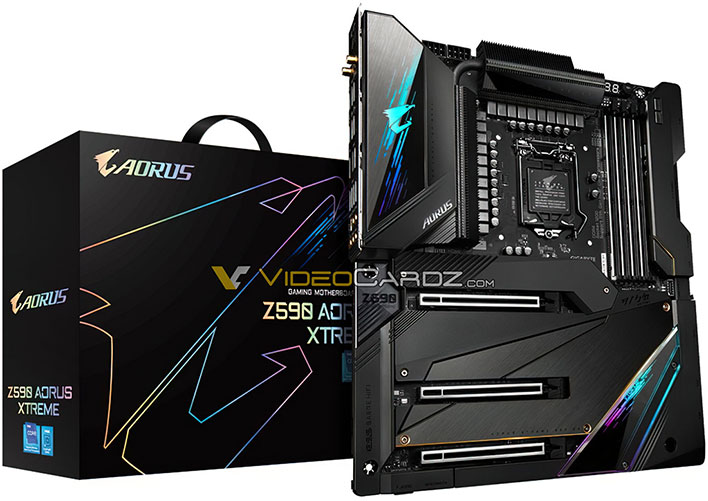 According to Videocardz, Gigabyte is set to unveil its 500-series motherboard lineup next week. This suggests that Intel could also unveil its Rocket Lake-S lineup at the same time, though rumor has it the chips will actually release in March. Either way, we have some interesting hardware to look forward to, in the coming weeks.
As for this specific motherboard, the Z590 Aorus Xtreme is a higher end offering with a 20+1 phase power design, upgraded from 16+1 on the Z490 variant. It's also said to feature robust connectivity options, including Wi-Fi 6E, two LAN ports (2.5GbE and 10GbE), and Thunderbolt 4.
You can see in the picture above that there are three reinforced PCIe x16 slots. It also features three M.2 slots, two of which are Gen4 to accommodate super-fast PCIe 4.0 SSDs. And on the audio side, this is said to be the first motherboard to sport a Realtek ALC4080 codec, which has not yet been announced.
This is not going to be a cheap motherboard. For reference, the Z490 Aorus Xtreme is on sale at Newegg for $769.99 (down from $799.99). Ouch!