This year will likely end without a new generation of desktop CPUs from Intel, but if recent rumors are true, Rocket Lake-S has been cleared for liftoff in March 2021. Those upcoming 11th generation Core processors will replace Intel's 10th generation Comet Lake stack, and as you would expect, new motherboard chipsets will follow suit.
Before we get to those, let's talk a bit about Rocket Lake-S. This will be yet another CPU architecture that leverages Intel's longstanding 14-nanometer node, albeit another refinement (14nm+++++++++++++++?). That will be the case until Alder Lake-S arrives, with its fancy pants hybrid design and 10nm manufacturing node.
So Rocket Lake-S is set to be 14nm's swan song. It has also been suggested that it will use the LGA1200 socket introduced with Comet Lake-S, and work in existing 400-series motherboards like the Z490 (likely with a BIOS update required). But that does not mean a new set of chipsets will manifest. They inevitably will, and new alleged roadmap leak potentially sheds some light on which ones. 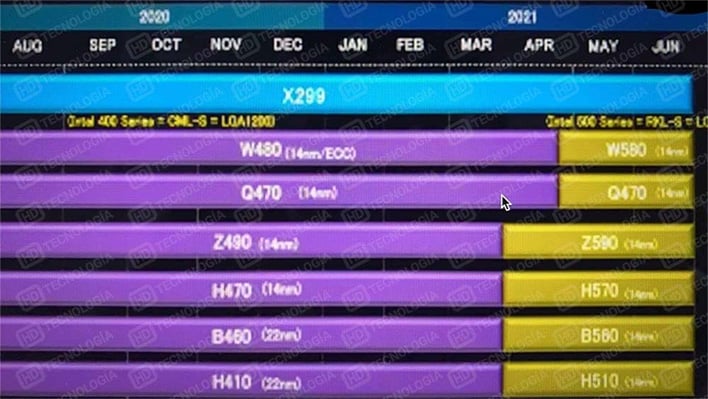 According to the supposed roadmap, which is said to come from "a recognized motherboard manufacturer" (Google translation), Intel will unload several new chipsets right at the outset. They include the Z590, H570, B560, and H510, all set to be unveiled in March at the same Intel's Rocket Lake-S desktop processors hit the scene.
The slide also reiterates the expectation that Rocket Lake-S will use the LGA1200 socket one more time, though we will have to take the site's word on that—the socket designation for Rocket Lake-S is clipped off the photo on the upper-right side.
Likewise, Intel is also planning a W570 chipset for workstations. Interestingly, the Q470 socket extends across the roadmap, though it appears that is either a typo (perhaps the new one should read Q570?), or this is completely made up. Even if the roadmap is fake, however, there is a high likelihood that we will see these chipsets on around the time frame indicated.
HD Technologia makes a couple of other interesting claims. For one, the site says Intel will not introduce any new HEDT chipset, which would allow AMD's Threadripper CPUs to lead the way. And regarding AMD, the site says the company is not planning to roll out new chipsets for Zen 3 until the second half of next year. We'll see.