Did Gigabyte Brazenly Rip-Off An Innovative Maingear Patent With Its Project Stealth PC?

A image shared to Twitter yesterday by Gigabyte's Aorus France division is generating some buzz and excitement among PC builders, as the design has the potential to vastly improve cable management and, by extension, airflow of modern gaming PCs and workstations. While incredibly nifty, there's just one potential problem—Gigabyte may be infringing on a decade-old patent held by the popular boutique system builder, Maingear, specifically its CEO, Wallace Santos.
We'll get to that in a moment, but first let's talk about Project Stealth. The bulk of what we have to go on right now is a teaser by @AORUS_France, which posted the above render on Twitter. If you look closely, you'll notice there are no motherboard connectors visible on the front of the board. That's by purposeful design.

Gigabyte relocated them all to the backside of the motherboard so that storage, power, cooling and other cables can be more easily routed behind the motherboard tray. This facilitates a cleaner looking build, at least in the front side, and frees the main motherboard compartment of cables that could possible interfere with the flow of air over toasty components.

A neat render is one thing, but there is evidence to suggest Gigabyte also designed and manufactured an actual prototype. The folks at GinjFo posted a couple of product shots obtained from one of its sources, as shown above. Assuming the pictures are real (and we think they are—the same AORUS France account retweet their article), we're looking at a couple of custom designs related to Project Stealth—case and motherboard.
In the picture on the right, we can see carefully placed cutouts in the motherboard tray for the various headers and other connectors. Most of them are on the bottom, but we can also see a few other protrusions on the left side and up top. Even the CMOS battery is visible, and accessible from the backside of the motherboard. 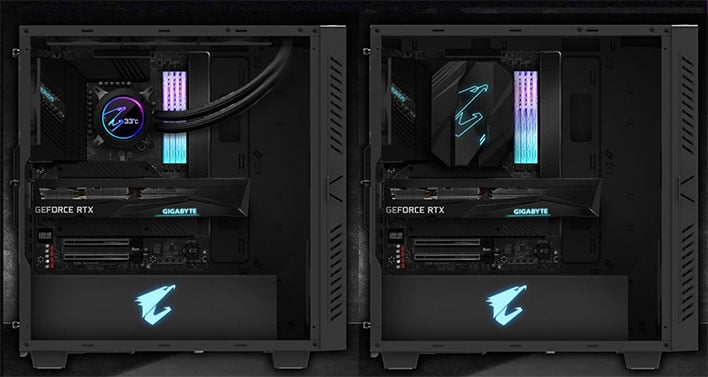 The result of the design changes is a gorgeously clean-looking build. Only the tubes from an all-in-one liquid cooler (or custom loop, if going that route) would stay on the front side. Otherwise, the finished build is barren of any clutter and absolutely beautiful, with RGB lighting adding some flair. Check out those neat renders above.

Speaking of, renders are easy and rather affordable to generate, whereas there is a much bigger investment that goes into prototypes and physical concepts. Physical designs also suggest a more serious level of investment and commitment. Not every prototype becomes a shipping product, but they certainly have better odds than a render alone. We bring this up because if the product photos are real, they could indicate Gigabyte has future plans to productize this concept. That could potentially include an unveiling at the Consumer Electronics Show (CES 2022), next month.

Maingear Patented A Motherboard And Case With Hidden Connectors In 2011

Here's the abstract from Maingear's patent:

To be clear, we are not saying Gigabyte definitely did or did not rip off Maingear's 2011 patent. However, we spoke to Maingear CEO, Wallace Santos, about the Gigabyte design that is virtually identical to the illustrations in his decade old and granted US patent, and he had this to say.
“While I’m not happy to see Gigabyte productized something based on my patent without proper licensing, especially since we reviewed our new design approach with them directly years ago, I’m more concerned with making sure we continue to take the industry forward with this new design innovation and its obvious advantages," Wallace said. "Our motherboard and case with hidden connectors design offers far superior cable routing and management, with better airflow across the front of the motherboard area. We would love to see the industry get on board with the design, so all PC OEMs can benefit, as well as DIY enthusiast PC builders."
Wallace tells us he was a little surprised the USPTO granted the patent so completely, but when it did, he shopped the design concept around to multiple companies, including ASUS, MSI, AMD, Intel, and yes, Gigabyte. He describes the response he received as luke-warm to definitely interested at the time. However, this was not because it's a bad idea—quite the contrary, actually—but because it would require a disruptive change in case design, though less so for motherboards. And so it never gained a lot traction. 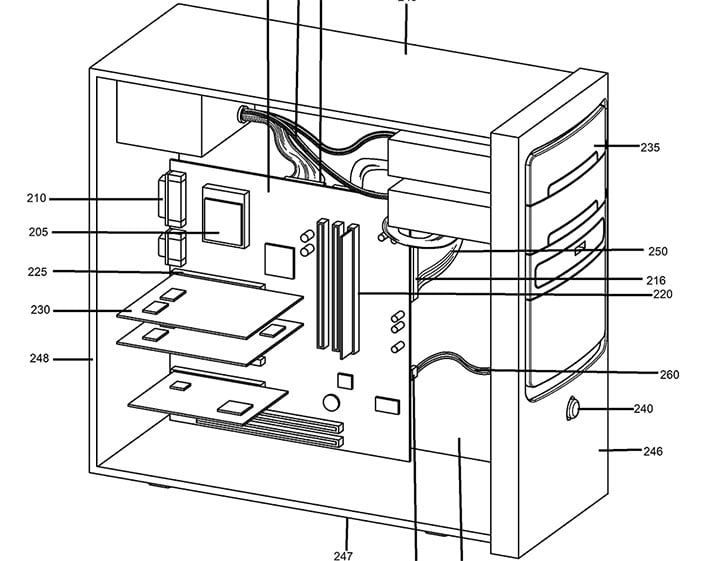 It's a clever design, though, and not just for better aesthetics and airflow. Wallace says moving the connectors to the back of the motherboard could vastly reduce build times, because less time and energy would need to be put into intricate cable management. By how much, who knows—companies like Maingear pride themselves on clean builds in every part of the PC, not just the section that is visible.
So, did Gigabyte rip off Maingear's design? We'll let you decide on that one. It certainly appears strikingly similar. From the outside looking in, it's pretty damning that Maingear specifically approached Gigabyte (and others) about this, and now a prototype exists. Maybe it was a different team back then, and the current team had no idea about the patent. We've reached out Gigabyte for comment and will update this article when/if we hear back.
In the meantime, Maingear CEO, Santos tells us that, as a refreshing change of pace when it comes to patents, he's more concerned with advancing the industry with his new innovation and invention, rather than with filing lawsuits. Still, protecting your intellectual property is what filing with the USPTO is all about in the first place. If this is indeed patent infringement, hopefully Gigabyte AORUS does the right thing and comes to an agreement with Maingear.
Also, Wallace will be joining our Two And A Half Geeks webcast on Wednesday, December 15 at 5:30pm ET (2:30pm PT) to talk about this and other topics. So be sure to join us!