Gigabyte and its in-house overclocker, HiCookie, just set a new world record for the fastest DDR5 memory speed ever achieved. The official record to beat, as recognized by a validated HWBOT listing, now stands at 11,135MT/s, or 11,135MHz if you prefer the more common albeit technically incorrect way of listing the speed-slash-data transfer rate. Let's just call it DDR5-11135, shall we?
MT/s versus GHz debate aside, this is a seriously impressive achievement. HiCookie set the record using Gigabyte's own and not-yet-released Aorus -brand DDR5-8333, which sat nestled in a Z790 Aorus Tachyon motherboard alongside a 13th Gen Intel Core i9-13900K Raptor Lake CPU.

What's also notable about the record overclock is that HiCookie didn't need to employ exotic cooling, at least for the RAM—he hit DDR5-11135 with just ambient air flow from an open-air test bed. He did stick an LN2 pot on top of the CPU, as can be seen in the video above, but frigid temps were not required to coax the RAM to all-new heights. 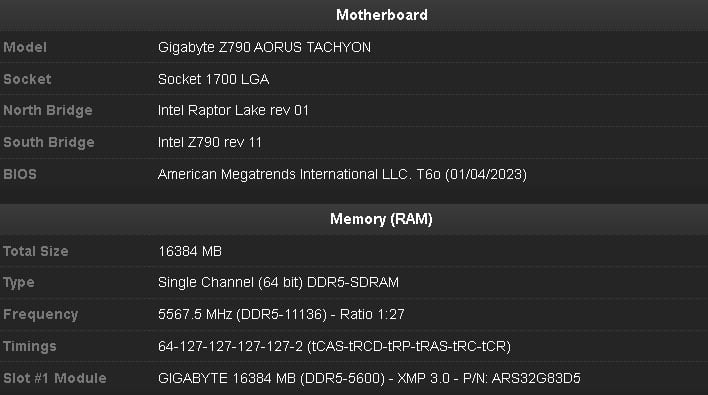 There are some caveats, though. The first is that it appears HiCookie set the record on a single module rather than two modules running in a more desirable dual-channel configuration. And secondly, this record run necessitated relaxing the timings quite a bit to 64 (CL) - 127 (tRCD) - 127 (tRP) - 127 (tRAS) - 254 (tRC), with a 2T command rate.
The era of DDR5 memory is still in its infancy, and as we've seen in the early going the higher data transfer rates typically come at looser latency settings compared to DDR4. In many cases, the speed gains offset the higher timings, though it really depends on the specific settings and what benchmark or workload is being used to gauge performance. 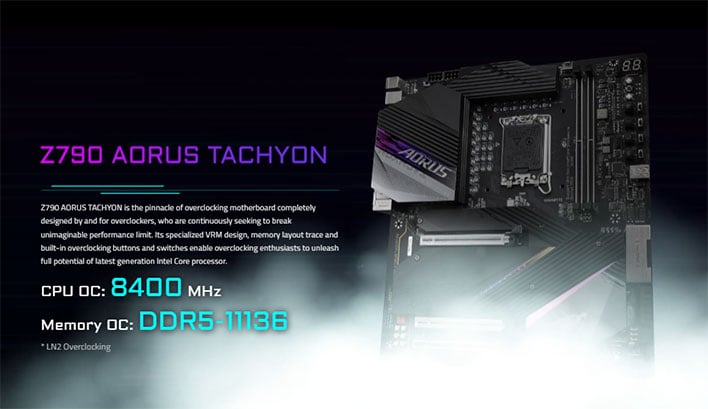 It didn't take long for Gigabyte to update its Z790 Aorus Tachyon motherboard page to highlight the record memory overclock. That slab of silicon traces is mainly intended for these kinds of benchmark runs, though there's nothing stopping you from using it as your daily driver. Well, except for its scarcity and price tag—we found one for sale by a marketplace seller on Newegg for $1,259. Yeah, hard pass buddy.
As we've stated before, faster memory kits are coming, and they'll make these early overclock records less notable. Adata, for example, teased DDR5-12600 memory back in 2021. Now that both AMD and Intel support DDR5 on their latest generation platforms, memory makers have sufficient motivation to push the envelope and crank those clocks.