The year is 2020 and flip phones are back. Are these new smartphones practical for everyday users or are they a novelty piece? iFixit recently disassembled a new Samsung Galaxy Z Flip and concluded that the device will be very difficult and costly to repair.

The iFixt experts first noted that the Galaxy Z Flip’s specs are more impressive than its competitor, the Motorola Razr. The Flip features a Qualcomm Snapdragon 855+ SoC, 8 GB of RAM, 256 GB of internal storage, and a 3300 mAh battery power in two cells. In comparison, the Razr includes a Qualcomm Snapdragon 710 SoC, 6GB memory, 128GB of storage, and a 2,510 mAh battery. The Galaxy Z Flip is also a little over one hundred dollars cheaper than the Razr. Nevertheless, iFixit contended that the Galaxy Z Flip’s folding mechanism is not nearly as clean as the Razr’s folding action. They also stated that you will quickly notice a crease in the display of the Galaxy Flip.

Can the Galaxy Z Flip be more easily repaired than the Razr? The answer is yes, but barely. The Galaxy Z Flip was given a repairability score of 2 out of 10, while the Razr was given a score of a 1 out of 10. They pointed out that a Phillips head screwdriver is all that is needed to take care of the device’s screws. They also praised the Galaxy Z Flip’s modular components that could be replaced independently. 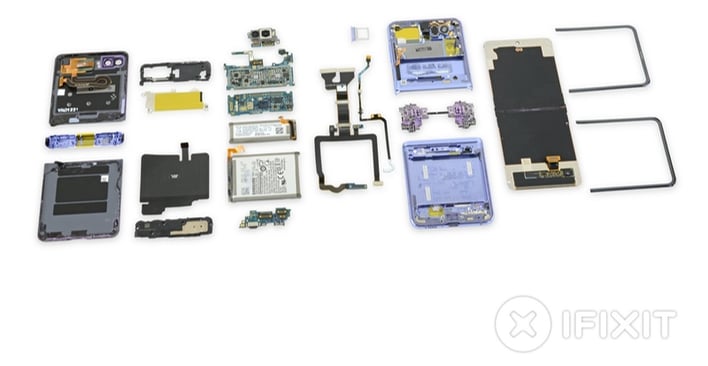 The Galaxy Z Flip is unfortunately otherwise rather difficult to repair. Battery replacements could be possible, but would be hampered by complicated cables and the fact that the two battery cells are glued down. The Galaxy Z Flip’s glass panels are also glued down which would make it difficult to gain access to the device’s innards.

They also expressed concerns about the Galaxy Z Flip's longevity. They covered the Galaxy Z Flip in dust, and the dust managed to coat the device’s hinges. The top of the glass display is covered in plastic and scratches very easily. These components would likely need to be replaced and their replacement will not be cheap. Samsung will only charge $119 for a user’s first screen replacement, but will charge $499 thereafter. The Galaxy Z Flip’s screen also failed Jerry Rig Everything’s (JRE) durability test.

iFixit concluded, “Unless you’re an Instagram influencer living in a pristine apartment who needs the newest hotness, this phone is probably not for you. It’s more of a novelty luxury item.” Companies at the moment appear quite eager to release folding smartphones. Perhaps subsequent generations will be easier to repair.