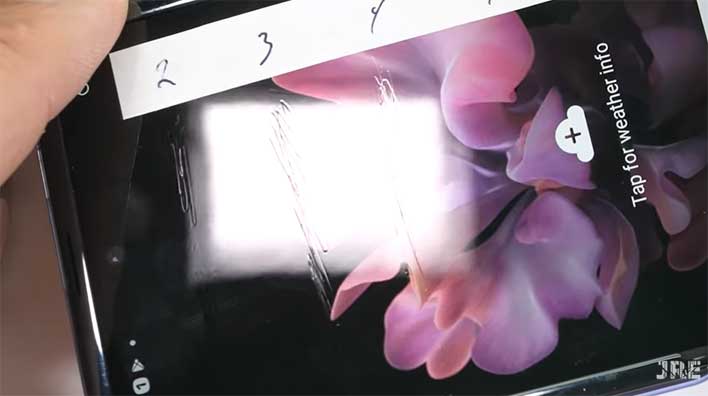 Jerry Rig Everything (JRE) has long been taking smartphones and putting them through rigorous to see how durable they are. One of the most annoying things for many smartphone users is a screen that scratches easily. After Samsung touted how durable its thin and flexible glass was, being able to withstand 200,000 folds, JRE decided to put the device to the test for screen durability. However, the test didn't go so well.

One thing noted before the durability test starts is that the flexible glass over the camera lens has a divot in it and that you can see a crease in the glass over the hinge area when the device is unfolded. JRE also promises to test the hinge for durability later, noting that it is supposed to have brushes inside to keep dust out.

The screen showed visible indents when scratched with a pick starting with level 2. JRE says this is on par with any other plastic screen smartphones that it has tested. The marks become even more obvious when a level 3 pick is used, and with a level four pick, JRE can feel the pick cutting the surface. Typically glass screens start to have scratches at level 6 and deeper grooves at 7. Essentially while Samsung touts glass on the Galaxy Z Flip, the screen responds more like plastic to scratches. With the heat test, the screen changed shape with heat from a lighter, which again reinforces that the screen is plastic, not glass, as Samsung claims.

JRE thinks that Samsung may be using a plastic polymer with "specks" of glass inside and calling it glass. It's also worth noting that JRE uses a fingernail to leave faint marks on the surface of the screen. A border around the screen is also made from plastic, while most of the frame and buttons are made from metal. The back cover is made from glass, and the rear cameras are covered in glass.

Samsung went official with the Galaxy Z Flip at the Unpacked event earlier this month, and the smartphone is available now priced at $1,380.